HOME / WORLD / How Iran’s protests are different from Iraq, Lebanon 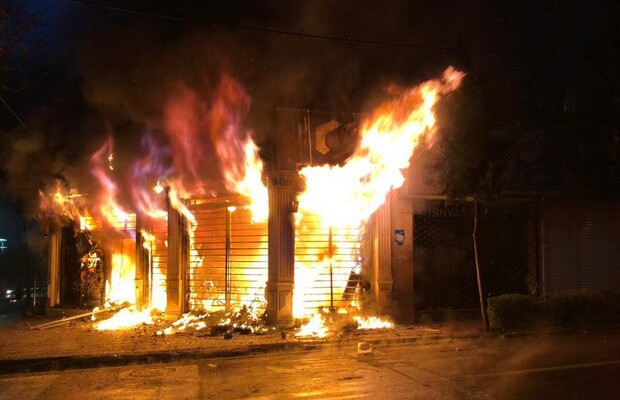 By: Hamidreza Gholamzadeh- From day one of the eruptions of protests in Iraq and Lebanon, many mainstream media outlets in the west as well as regional media were insisting on drawing parallels between the situation in Iran and those countries.

This has two main reasons; first, those trying to imply that similar problems bear similar outcomes and that Iran is doomed to witness an upcoming regime change sooner or later. Second, many think tanks and analysts in the west are still seized by the very spirit of orientalism which cannot correctly realize differences between the nations in Western Asia and insist on a monolithic understanding of the Orient.

So, what are the differences and how do they shape diverse outcomes out of similar situations?

1- Sectarian or ethnic conflicts do not exist in Iran.

Lebanon has a history of sectarian conflicts which has prevented the country from holding a national census since 1932. Lebanon has a constitutional system of sharing power by dividing top positions based on religion and sect. Iraq is also house to Sunnis, Shias, Yazidis, and Kurds and they have experienced the brutality of Saddam against almost all of them and the conflicts made between people in those years. Unlikely, Iran has for centuries held various ethnicities, faiths, and denominations next to each other in unity and they have successfully passed through times of hardship by sacrificing for one another.

2- Even though the smallest corruptions are contemptible, corruption in Iran is not as serious.

Political backgrounds and geopolitics of Lebanon have turned the country into a battleground for regional and global powers. Many officials have been fed by foreign states and intelligence organizations, playing their games. This resulting corruption among politicians and officials has not been ignored by the nation, and might even be overestimated. More than 90 percent of the Lebanese consider their officials as corrupt according to a Gallup study. In Iraq, the situation is even worse. After a bitter year of ‘oil-for-food’ sanctions, the country was lashed by US-led invasion which not only killed hundreds of thousands of civilians but also destroyed almost all of the infrastructures of the country. Tribal culture and US presence behind the scenes to exploit oil and other wealth of Iraq has paved the way for corruption among officials.

Despite a Revolution which was followed by eight years of devastating war imposed against Iranians by the support of western countries, and of course four decades of tough inhumane sanctions, the Islamic Republic managed to survive and flourish by clinching to domestic capacities to indigenize knowledge-based capabilities. Iran has turned into a regional power by developing its defensive capabilities recently astonishing the world by downing the most advanced American drone over the Persian Gulf by a native missile system.

This could have not come true if it was not for standing all the difficulties through the years of military and economic warfare against the country. What Iranians experienced during the war is not even comparable to the current situation. With single-digit oil prices and tanker wars, people in Iran went through the hardships of rationing of basic goods, sharing many facilities and stuff with neighbors and relatives and living very humble lives. Developments and improvements in life standards are nothing even close to comparison to those times. Therefore, one can say that if people were fighting, very optimistically put, between bad and good in the early years after the Revolution, now they are calling for better rather than good even if put very pessimistically.

Since President Trump’s executive order to withdraw from the Iran nuclear deal, the JCPOA, in May 2018, the Iranian economy has become rather resilient against the US so-called Maximum Pressure Campaign of sanctions. When a year ago, in August 2018, Donald Trump reinstated the sanctions supposedly removed by the deal, the Iranian market showed almost no reaction to it; and it has not happened any further despite several rounds of fresh sanctions being forced against the country. People have come to this conclusion that the main reason behind the difficulties is the incompetence of the government rather than sanctions. Consequently, they are urging more responsible decision making in government and parliament, more sensitive toward the sufferings of people.

Meanwhile, with regard to anger from corruption, polls show that popular support for the Judiciary’s performance in fighting corruption has improved. Trials and indictments for some big corrupt names have satisfied people to some extent. The newest achievement has been returning of person convict of embezzling 400 million dollars into the country. Unlike, Lebanon and Iraq, popular trust in the judiciary has considerably healed.

The current situation in Iran seems more to be the type of Baudrillard’s idea of Hyperreality. The drastic rise in fuel prices is not as harshly targeting almost everyone in Iran as WhatsApp taxation did in Lebanon, or did the oil income loss in Iraq. Of course, the indirect impact of more expensive energy on everything cannot be denied, but the majority of Iranians can still live with the rationing considered for them. Yet as the theory of hyperreality explains, long coverage of protests in Iraq and Lebanon and analogies made by the media, shaped the minds of people in Iran to seek some excuses to protest.

On the first working day after the new decision went into effect, protesters in many cities closed the roads and streets, set many public properties ablaze and vandalized streets. Public anger over the fuel prices is understandable, but soon after the excitement fades away, the middle class and lower class will realize that they are the main targets of the damages and destructions. They will very soon, realize – as they did after eight months in 2009 and after a couple of weeks in early 2018 – that democratic and modern protests is not through violence and there are infiltrators hijacking legitimate public protests. Iranians have numerously grieved over outside aggressions trying to sow discord among them, terrorizing and assassinating them, and encouraging violence; yet they have always come, sooner or later, to conclusion that no outsider can ever decide better for them than themselves, and that unity against any intervention and infiltration is the best way to maintain national pride, integrity, and sovereignty.

Demands by the upper class are not comprehensive enough to be the concerns of the lower class of people. The middle class and lower class are not adventurously looking for arson and destruction; thus, after a while, neither the upper class nor the infiltrators (whose presence in some cities and parts cannot be denied) will not be able to continue their leadership of the events and will be dispersed by the people who cannot continue stopping routines of their daily lives.

0 thoughts on “How Iran’s protests are different from Iraq, Lebanon”