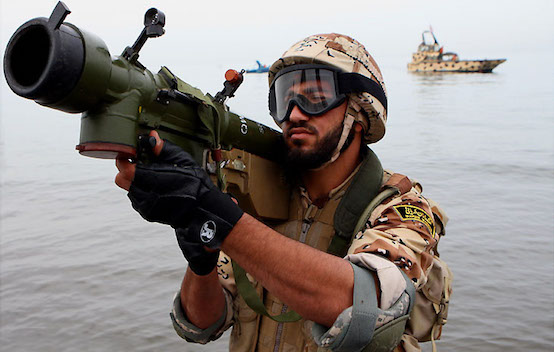 After a destabilizing move by Trump, it’s no longer a question of if U.S. forces will die but when.

It is no longer a question of if Americans will die in a conflict with Iran, but when.

The United States has long been engaged in a secret shadow war with Iran’s Islamic Revolutionary Guard Corps (IRGC), dating back to the American invasion and occupation of Iraq in 2003.

This conflict took the lives of hundreds of American troops and hundreds more IRGC members. The Iranian opposition to the U.S. occupation of Iraq, and the inability of the U.S. to militarily defeat Iranian forces inside Iraq, was just one reason that the Obama administration decided to withdraw American troops in 2011.

Since that time, a tenuous truce has existed between the U.S. military in the region and the IRGC. Even when American troops were re-deployed to Iraq in 2014 to help defeat the Islamic State (ISIS), they did so in concert with IRGC who were fighting alongside Iraqi Shiite militias. American forces inside Syria likewise avoided direct conflict with the IRGC, which was aiding the Syrian military.

But now, the Trump administration has made the decision to designate the IRGC a terrorist organization. This little reported move will have large consequences, shredding the prior truce and putting the lives of thousands of U.S. service members at risk.

“Today, I am formally announcing my Administration’s plan to designate Iran’s Islamic Revolutionary Guard Corps (IRGC), including its Qods Force, as a Foreign Terrorist Organization (FTO) under Section 219 of the Immigration and Nationality Act,” the president announced on April 8. The designation will take effect on April 15.

Trump further noted, “This designation will be the first time that the United States has ever named a part of another government as an FTO,” adding, “This action sends a clear message to Tehran that its support for terrorism has serious consequences. We will continue to increase financial pressure and raise the costs on the Iranian regime for its support of terrorist activity until it abandons its malign and outlaw behavior.”

The Quds Force, a unit within the IRGC that specializes in operations outside Iran, has long been viewed as a terrorist organization by the United States. The IRGC as an entity, however, operates as an integral part of the Iranian government. As such, the U.S. has deliberately avoided classifying it as a terrorist organization out of concerns that doing so would hobble diplomatic efforts with Iran and even destabilize the greater Middle East.

Given the fact Washington is currently engaged in a global “war” on terrorism, this designation—which places the IRGC on the same footing as ISIS and al-Qaeda—means that the U.S. is in effect at war with Iran.

Iranian Foreign Minister Mohammad Javad Zarif responded to the designation on Monday. He recommended in a letter to Iranian President Hassan Rouhani that—given the ongoing overt and covert support of U.S. military forces in the region for groups that have been involved in terrorist acts against Iran—the Supreme National Security Council should designate U.S. Central Command as terrorists.

The Iranians have long assessed that U.S. intelligence services and Special Operations forces have used militant Iranian opposition organizations as proxies in a bloody, undeclared war to undermine the legitimacy of the Iranian government and harm the IRGC. For example, last February, a Baluch separatist group, Jaish al-Adl, claimed credit for the bombing of a bus carrying IRGC soldiers, which killed nearly 30 people. The IRGC claims that the group received its instructions, training, and equipment from U.S. personnel operating out of Afghanistan.

Likewise, in September 2018, a group calling itself the “Arab Struggle Movement for the Liberation of Ahwaz” launched an attack on an IRGC paradein the Iranian city of Ahvaz, killing scores. Iranian state media put the blame for this attack squarely on the U.S. and its Gulf allies, remarking, “The attack comes after a U.S.-backed campaign to stir up unrest in Iranian cities fell flat. The effort, known as the Hot Summer Project, sought to whip up public anger over water and electricity shortages in the face of a protracted drought.” Foreign Minister Zarif likewise blamed the United States and Gulf states. Saudi Arabia and the United Arab Emirates have been foursquare behind the U.S. in trying to thwart Iranian influence in the region, the four-year war in Yemen being the most catastrophic example of how far they will go to achieve that goal.

Then-U.N. Ambassador Nikki Haley adamantly denied that the U.S. had anything to do with the September attack.

Zarif’s recommendation to designate Central Command as terrorists was echoed by Heshmatollah Falahatpisheh, the head of the Iranian parliament’s national security committee. The IRGC also made its position clear regarding the FTO designation. “If the Americans take such a stubborn measure and endanger our national security we will put in place counter-measures in line with the police of the Islamic Republic of Iran,” Major General Mohammad Ali Jafari, the IRGC’s commander-in-chief, declared. He further noted that if this happened, U.S. forces would no longer be safe in the region.

The impetus behind Trump’s decision is clear—he wants to support Israeli Prime Minister Benjamin Netanyahu. Netanyahu himself acknowledged as much in a tweet: “Thank you, my dear friend President Donald Trump, for deciding to declare the Iranian Revolutionary Guard Corps as a terrorist organization. Thank you for answering another one of my important requests, which serves the interests of our country and the countries of the region.”

The other request referred to by Netanyahu was the decision made in May 2018 to withdraw from the Iran nuclear agreement. Since that time, the U.S. has found itself increasingly isolated from the rest of the world, especially Europe, which has opted to remain a part of the agreement, which it notes that Iran continues to fully comply with. The decision to designate the IRGC as a terrorist group is viewed by many as a mechanism for increasing pressure on Iran by expanding the scope and scale of economic sanctions against entities doing business with the IRGC. The timing of the announcement is seen as an attempt to influence the outcome of elections in Israel, where Netanyahu is struggling in a bid for reelection.

But another reason might be lingering resentment within certain American circles over the role played by the IRGC in fomenting resistance to the U.S. occupation of Iraq. “In Iraq, I can announce today, based on declassified U.S. military reports, that Iran is responsible for the deaths of at least 608 American service members. This accounts for 17 percent of all deaths of U.S. personnel in Iraq from 2003 to 2011,” declared Brian Hook, the U.S. Representative for Iran, in a briefing this week.

Left unsaid was that during that same time, the U.S., through the Joint Special Operations Command (JSOC), was engaged in its own undeclared war with Iran on Iraqi soil. Far from being the fallout of unilateral Iranian acts of terrorism, the U.S. combat deaths referred to by Hook were part and parcel of a conflict waged in the shadows that only ended with the withdrawal of U.S. combat forces from Iraq in 2011.

Given this direct link between American and Iranian aggression in Iraq, there can be no doubt that the Trump administration understands that by designating the IRGC as a terrorist organization, it has placed the lives of thousands of American personnel still serving in the Middle East at risk. There are currently between 1,000 and 1,500 U.S. troops inside Syria, and they are surrounded by IRGC-affiliated forces and militias. And more than 5,000 U.S. troops are stationed inside Iraq, where the IRGC controls powerful Shiite militias as well as significant portions of the Iraqi military.

There can be no doubt that if the U.S. acts kinetically against the IRGC, Americans will die. That this policy has been implemented in support of the re-election campaign of an Israeli prime minister, in furtherance of an effort to undermine the Iranian nuclear deal that was likewise implemented at the behest of Benjamin Netanyahu, means these brave men and women will not have died in the service of their country. They will have perished as pawns of a policy conceived in Tel Aviv that places the political fortunes of a foreign politician above the lives of our heroes.