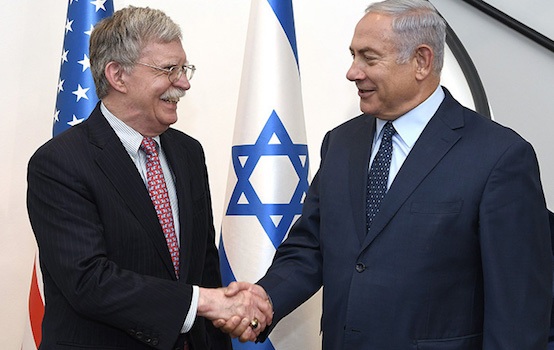 President Donald Trump’s national security team has been leaking “intelligence” about Iranian threats for a week now in an attempt to justify escalating tensions, including moving American air attack assets to the Persian Gulf. But a closer look suggests that National Security Advisor John Bolton and other senior officials are trying to pull off an intelligence deception comparable to the fraudulent pretense for war in Iraq.

There’s also credible evidence that Israel could be playing a key role in this subterfuge.

This deception has served to defend not only a U.S. military buildup in the region, but an expansion of the possible contingencies that could be used to justify military confrontation. In Bolton’s White House statement on May 5, he said the deployment of assets to the Gulf would “send a clear and unmistakable message to the Iranian regime that any attack on United States interests or on those of our allies will be met with unrelenting force.”

But public claims by the White House about Iran don’t reflect “intelligence” in any technical sense of the word. No one has cited a single piece of hard evidence that justifies these claims of threats, let alone any that are “new,” as press leaks have suggested. All of them appear to be deliberate and gross distortions of actual facts. Thus do they parallel the infamous aluminum tubes of the run-up to the invasion of Iraq, which were presented as proof of an incipient Iraqi nuclear weapons program, despite the fact that technical analysis had shown that they couldn’t have been used for that purpose.

The Washington Post reported on May 15 that Pentagon and intelligence officials had cited three “Iranian actions” that had supposedly “triggered alarms”:

None of those three claims describes actual evidence of a threatening Iranian “action”; all merely refer to an official U.S. “concern” about a possible Iranian threat.

The notion of missile launchers on small Iranian boats threatening American ships has been the subject of extensive leaks to the media. But a closer examination of that story shows that it’s an entirely artificial construct.

Multiple news outlets have reported that the concerns over missiles launchers are based on aerial photographs showing Iranian missiles in small fishing boats, or dhows, that are “believed” to be under the control of the Islamic Revolutionary Guard Corps. An ABC News story claims that these photos were “taken by U.S. intelligence” above the Iranian port of Chabahar. This is said to have stoked fears that the IRGC would use them against U.S. naval ships.

This, however, makes no strategic sense. In the first place, as Fabian Hinz, an independent specialist on missile proliferation, has observed, the IRGC would need to have a method of launching them from boats, which would require extensive testing. None of that has been observed up to now, and such a development seems extremely unlikely.

The IRGC also has no reason to consider using small fishing vessels to target U.S. ships, because Iran already has an impressive arsenal of land-based, anti-ship cruise missiles with all the range it needs. And those missiles are much less vulnerable than jury-rigged weapons, as they’re hidden in underground bases and disguised in trucks.

Hinz writes that the Iranians in the photos were most likely transporting the weapons to one of Iran’s islands in the Gulf, which are already known to have such anti-ship missiles.

The fishing dhow story isn’t the only one to suffer from a serious lack of credibility. The other two, suggesting a threat to U.S. military personnel and diplomatic facilities in Iraq from Iranian-supported militias, were discredited during an official Pentagon-sponsored press briefing by Major General Christopher Ghika, British Deputy Commander of Operation Inherent Resolve for strategy and information. Ghika declared explicitly that there is “no increased threat from Iranian-backed forces in Iraq and Syria,” and repeated it when challenged by a shocked Barbara Starr on CNN.

So where did the idea of Iran using fishing dhows to target U.S. ships in the Gulf come from? Not a single media report has suggested that either CIA Director Gina Haspel or Director of National Intelligence Dan Coats provided such information. Acting Secretary of Defense Patrick Shanahan would not specify the source when he told members of the Senate Appropriations Committee on May 8 that senior administration officials had “received indications and this very, very credible intelligence” on Friday afternoon, May 3. That was when officials met with Bolton at the Pentagon, according to the transcript of the meeting provided to TAC  by Shanahan’s press office.

Newsweek unearthed another clue as to the provenance of the claims. The magazine said that it learned from one Pentagon official that the satellite imagery of loading missiles into fishing dhows was not produced by U.S. intelligence but rather had been provided by Israel.

Reporting by the leading Israeli diplomatic correspondent Barak Ravid, now of Channel 13 but also filing for Axios, provides more detailed evidence that Israel was the original source of all three alleged Iranian threats. Ravid’s story reports that an Israeli delegation, led by national advisor Meir Ben Shabbat, met with Bolton and other U.S. national security officials in the White House on April 15 and passed on to them “information about possible Iranian plots against the U.S. or its allies in the Gulf,” according to “senior Israeli officials.”

Bolton confirmed the meeting with Ben Shabbat in a tweet after it happened, but revealed nothing about what was discussed.

Ravid’s Israeli sources acknowledged that it wasn’t hard intelligence or even an intelligence assessment based on evidence. Instead, as one Israeli official acknowledged, Mossad “drew several scenarios for what Iran might be planning.” Ravid’s sources ultimately admitted that Israel’s Mossad doesn’t really know “what the Iranians are trying to do.”

This is the obvious explanation for why U.S. officials were so unwilling to reveal the provenance of what has loosely been called “intelligence.” It also tallies with one Pentagon official’s revelation to Newsweek that the satellite imagery cited as evidence of missiles in fishing boats had been “provided to U.S. officials by Israel….”

That April 15 meeting was only the most recent one between top U.S. and Israeli national security officials over the past year, according to Ravid. These meetings were conducted under a still-secret U.S.-Israeli agreement on a joint plan of action against Iran reached after two days of unannounced meetings at the White House between Ben Shabbat and then-national security advisor H.R. McMaster on December 12, 2017. Ravid reported the details of that agreement in late December based on information from a “senior U.S. official” and confirmation from senior Israeli officials.

Ravid’s story provided details on the four working groups that were formed under the agreement, including one on “Joint U.S.-Israeli preparation for different escalation scenarios in the region, concerning Iran, Syria, Hezbollah in Lebanon and Hamas in Gaza.” The Mossad “scenarios” apparently provided the central ideas with which to justify the Trump administration’s subsequent escalatory moves against Iran, including ostentatiously moving an aircraft carrier and a B-52 bomber group into the region.

Ravid asked the NSC for comment last summer about several meetings of the joint working group and was told, “we don’t confirm or provide details of internal deliberations.”

When reached by TAC on Monday, the NSC press office declined to respond to Ravid’s reporting or other reports indicating that Israel was the source of the “very credible intelligence” about Iranian threats.

Bolton’s May 5 statement warning of “unrelenting force” against Iran in response to any attack by either Iranian or “proxy” forces added a very significant new element to America’s retaliatory threats. It referred to an attack “on United States interests or on those of our allies.” That broadening of the range of scenarios that could be cited to justify a U.S. strike against Iran, which has so far been studiously ignored by major news media, represents a major concession to the Israelis and Saudi Arabia.

It also creates a new incentive for the Israelis and Saudis to provoke military responses by Hamas in Gaza or the Houthis in Yemen. And it poses the problem of incidents that could be blamed on Iran or a “proxy” but for which actual responsibility is ambiguous, such as the apparent “limpet mine” attack on oil tankers on May 12—or the rocket fired into Baghdad’s Green Zone within a mile of the U.S. embassy there Sunday night.

These deceptions are part of a dangerous game being run by Bolton in which Israel is apparently playing a crucial role. That should prompt some serious questioning as to Bolton’s claims and the role of the alleged secret U.S.-Israeli understandings.

There are already signs of resistance within the Pentagon in response to this move towards war with Iran, as reported by Newsweek late last week. “Be on the lookout for Iraq 2.0 justifications,” said one military official. “Think about the intel indicators prior to the Iraq invasion. Compare. Then get really uneasy.”

Trump Is Being Set-up for War with Iran