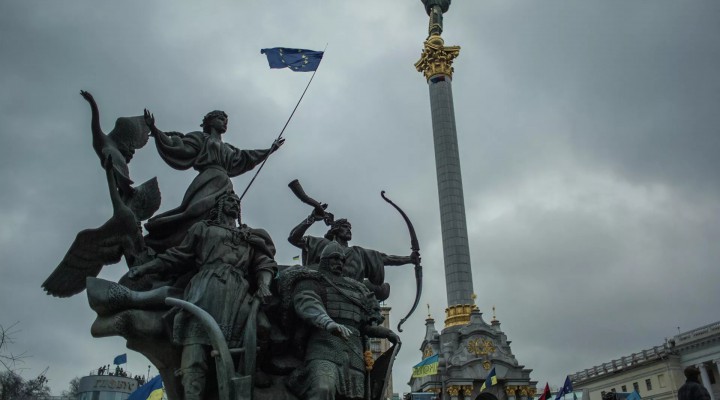 Ukraine seems to enjoy a kinky geopolitical relationship that could be known as NATO-masochism. It’s a dive into the dark recesses of slave-master dominance in which pain and humiliation induce dubious pleasure.

This is a country – or at least the ruling administration is – that wants to have a war with Russia in order to please would-be superiors in NATO.

Look at the strange behavior. The Kiev regime has been begging for NATO membership for years only to be continually put on the long finger. So desperate to join the US-led military bloc, it is willing to plunge its own people into a devastating conflict against Russia.

So desperate to please its Western masters, the Kiev rulers have forfeited buying affordable gas directly from Russia, preferring to make their people suffer higher prices by purchasing indirectly Russian gas from European suppliers – all for the sake of appearing “independent”.

For nearly eight years, Ukrainians have seen their country plagued by civil war, corruption and Neo-Nazi revivalism – all because certain factions want to turn their nation into a plaything for US and NATO imperialism against Russia.

The economy has been brought to its knees in ruination in order to indulge an obsession for pleasing and ingratiating foreign powers.

Appropriately, it seems, Ukraine is reputedly the birthplace of the psychiatric condition known as “masochism”. The term was invented in the late 1800s following the publication in 1870 of a novel that explored the darker side of sexual relations. The author Leopold von Sacher-Masoch hailed from the city of Lviv. His fictional story ‘Venus In Furs’ is a seminal and explicit account of a relationship in which the male character sought gratification from being debased and humiliated by an elusive lover.

Said Britain’s top diplomat: “Any Russian incursion would be a massive strategic mistake and would be met with strength, including coordinated sanctions with our allies to impose a severe cost on Russia’s interests and economy. The UK’s support for Ukraine is unwavering.”

Unwavering support, eh? A few days later, it emerged that British military chiefs have an “exit plan” in place to quickly pull UK troops out of Ukraine if there is a war with Russia.

The Daily Express reported: “More than 100 are deployed in a training and advisory role with Polish, US and Canadian forces. The move to shape an exit strategy follows Defence Secretary Ben Wallace saying it is ‘highly unlikely’ UK forces will fight Russian troops on Ukrainian soil.”

British troops have been in Ukraine since after the 2014 NATO-backed coup in Kiev. Along with military personnel from the United States, Canada and other NATO members, the Brits have been training Neo-Nazi brigades in techniques of warfare. Funnily enough, the Western troops are based near Lviv in Ukraine’s western region – the birthplace of masochism.

The British military plan to flee Ukraine in the event of a war erupting with Russia is matched by US President Joe Biden saying earlier this month that additional American troops would not be sent to Ukraine if Russia were to invade.

Moscow has repeatedly stated that it has no intention of invading Ukraine or any other country. It says the Western media reports of troop movements within Russia are hysterical hyping calculated to foment a war with Ukraine.

The United States and its NATO allies have been inciting the Kiev regime in its bravado against Russia. The buildup of NATO warplanes and warships in the region can be seen as a way of goading Ukraine to adopt ever more reckless aggression towards Russia. The British sent a destroyer HMS Defender in June this year to the waters around Crimea as a provocation. Dozens of other vessels from NATO have also piled into the Black Sea region. This buildup is giving the Kiev regime a false sense of security that it can start a war against Russia and receive NATO support when the shooting starts.

It won’t. Washington, London and the other NATO powers will leave Ukraine out to hang in the event of a conflict. They’ve said so. It will be pain and suffering inflicted on ordinary people for whom the NATO sadists have nothing but contempt.

Truth be told, Ukraine is not the only victim of the fetish known as NATO-masochism. All 30 members of the military bloc are playthings for US-led imperialist aggression. The Kiev regime is just a particularly bad case of fixation on the “pleasure” of humiliation and suffering.