HOME / WORLD / Why U.S. Security Talks With Russia is Invite to Hall of Mirrors 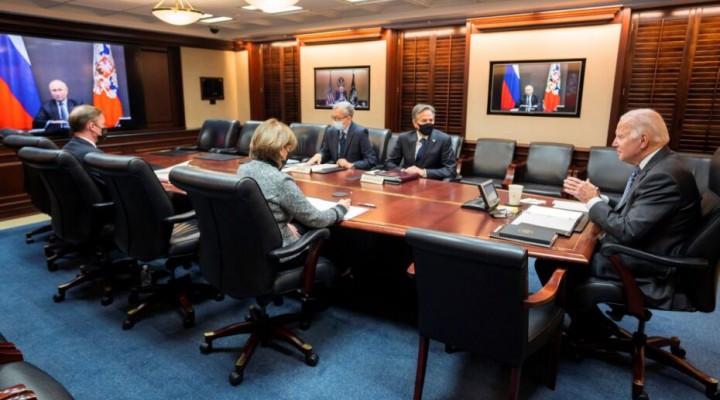 Washington and its partners are the problem. Any engagement being offered to Moscow is an invite into a hall of mirrors while on the outside the threat continues to lurk.

The United States and Russia appear to have reached an agreement to hold talks early in the new year to avert the mounting security tensions over Ukraine. But Moscow must be realistic. The talks will yield little to offset confrontation.

Russia last week unveiled a comprehensive set of proposals for security guarantees from the United States and the NATO military alliance. It called for no eastward expansion of NATO or deployment of U.S. strike weapons in countries bordering Russia. Moscow warned if there was not a reasonable reciprocation over its stated “red lines” then counter military measures would be taken instead. Such measures may include deployment of nuclear weapons in Belarus which Minsk has agreed to facilitate.

The combined Russian move seems to have gotten Washington’s attention. Foreign Minister Sergei Lavrov said this week that a forum for talks had been agreed by the Biden administration and that negotiations would begin sometime during January.

However, getting Washington’s attention and the latter actually listening are two different things. And, unfortunately, the signs are that the United States is not taking Russia’s existential security concerns seriously nor is it capable of framing the situation accurately.

While appearing amenable to holding early talks with Russia on the security stand-off over Ukraine, nevertheless the Biden administration is still provocatively blaming Moscow as the cause of the entire problem. The State Department continues to accuse Russia of “aggression” towards Ukraine and insists that Moscow must “deescalate” the tensions as a condition for any forthcoming talks to be productive.

Furthermore, the Biden administration is continuing its supply of weapons to the anti-Russian regime in Kiev as well as threatening to deploy economic sanctions in concert with the European Union that are designed to cripple Russia.

In other words, the security talks that Washington appears to be willing to hold with Russia in the coming weeks are not based on proper respect nor on a premise of genuinely trying to resolve security concerns. The United States is persisting in peddling its distortion that Russia is to blame when the opposite is true. It is the United States and its NATO allies who are weaponizing the Kiev regime to foment dangerous tensions with Russia. It is the U.S. and its partners who are threatening and aggressing Russia, not the other way around. That distortion is in itself provocative.

There’s another reason why talks with the United States under current circumstances are doomed to yield little progress towards sustainable peace.

The Biden administration says that it will engage with Russia on its security proposals. But, and this is the giveaway, in consultation with NATO allies and partners. That will ensure that Washington’s scope for reciprocating with Moscow is blinkered by the lowest denominator of Russophobia among NATO partners.

The Kiev regime is backed by Poland and the Baltic states who have all condemned any “concessions” to Russia. Polish President Andrzej Duda after meeting with Ukrainian and Baltic counterparts this week declared that NATO should step up military forces and sanctions to “prevent Russian aggression”. Duda accused Russia of “blackmailing” Europe.

Given this array of gross distortion about the source of tensions in Ukraine and Europe generally – Russia is incriminated, rather than the U.S. and its NATO war machine – it is futile to expect any dialogue between Washington and Moscow to produce a badly needed reduction in confrontation and a modus vivendi.

The U.S. and NATO are plying Ukraine with lethal weapons and military advisors. This week, Russia’s Minister of Defense Sergei Shoigu claimed that over 100 American private mercenaries were preparing some sort of false flag provocation in the Donbass region with chemicals. Ukraine is being set up for a proxy war in the well-worn U.S. modus operandi of Syria and other nations where covert dirty war was inflicted by the American imperialists and their European accomplices.

Alongside that, the NATO forces continue their large-scale buildup of forces, battalions, and strike weapons near Russia’s borders. And the jackals in NATO, like Poland and Baltic states, are howling for blood.

Yet, the Biden administration continues to insult common intelligence by accusing Russia of aggression and demanding that it must de-escalate for talks to proceed – talks, that is, that will be limited by the input of the most Russophobic mindsets in NATO as well as the unhinged anti-Russia regime in Kiev.

Russia has superb diplomats. They are more than capable of wiping the floor with U.S. and European counterparts when it comes to legal argumentation and logical reasoning. But even the most formidable diplomats can’t vanquish a falsified framework that is loaded like a gun to the head.

The signs are that Russia is being lured into a trap. Washington and its accomplices are not serious about respectful negotiations to resolve security problems. Washington and its partners are the problem. Any engagement being offered to Moscow is an invite into a hall of mirrors while on the outside the threat continues to lurk.

Russia may be better off using different tactics for more effectively communicating its concerns.

0 thoughts on “Why U.S. Security Talks With Russia is Invite to Hall of Mirrors”