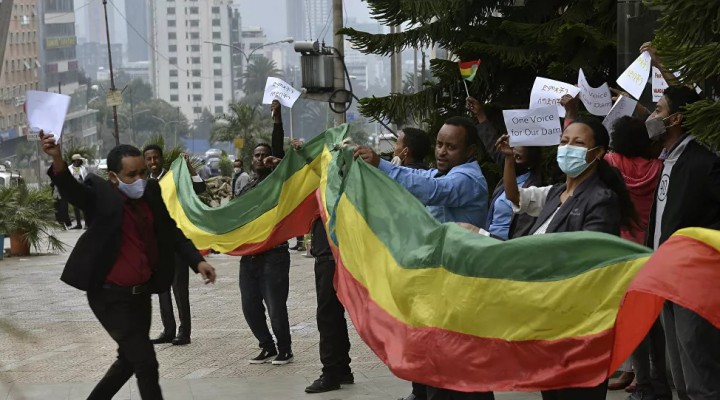 The news that Russia is to build a naval base adjacent to the Red Sea underscores the geopolitical background to the recent escalation of conflict in Ethiopia.

The Horn of Africa with its intersection of trade routes is the subject of intense geopolitical contest. China and more recently Russia are offering economic partnership for development, while the Western powers, primarily the US, view the interplay with the usual zero-sum mentality not willing to tolerate any other “interloper”.

Ethiopia sits at the center of this geopolitical chess game in the Horn of Africa, resonating with the old scramble for Africa among European colonial powers in the late 19th century.

Russian President Vladimir Putin this week gave approval for construction of a naval hub in Port Sudan in agreement with the government in Khartoum. The new facility will extend Russia’s military reach in the strategically important Red Sea – a vital shipping route linking the Indian Ocean with the Mediterranean.

The move is part of a wider push by Russia to develop trade and commercial links with Africa. A landmark summit hosted in Moscow at the end of last year projected new partnerships with Africa’s 54 nations.

This marks something of a revival in Russian relations with the world’s second-largest continent of some 1.2 billion people following years of absence after the fall of the Soviet Union.

Russia’s rebounding relations follows the already firm inroads that China has made among African nations, from offering financial grants and soft loans in return for access to the continent’s vast natural resources.

China and now Russia’s partnership plans for Africa have been warily observed by the United States and European powers. China has replaced the US as the top investor and trading partner in Africa.

A key partner for China in recent decades has been Ethiopia which because of its strategic position in the Horn of Africa and because of its natural leadership role for the rest of continent (the African Union is headquartered in Addis Ababa), it is viewed as the “gateway” to Africa.

The new government in Ethiopia under prime minister Abiy Ahmed – who came to power in early 2018 – has thrown the erstwhile partnership with China into uncertainty.

There are signs that Abiy is leading his country away from China’s economic benefaction and realigning it with Western capital. This has immense geopolitical significance because such a move would be seen as a blow to Beijing’s global economic plans known as the “new silk routes” linking Eurasia with Africa.

The previous government in Ethiopia was dominated by the Tigray People’s Liberation Front (TPLF) which forged strong economic relations with China over a three-decade period. The TPLF in its stronghold in the northern highlands of Ethiopia has suddenly become embroiled in civil war against the central government in Addis Ababa led by Abiy Ahmed.

As long as the Tigray region remains a strong oppositional force in Ethiopian politics, then the strategic reorientation of Ethiopia away from China towards Western capital is not a smooth one and indeed might be thwarted. To that end, it seems, the Abiy-led central government has moved to decisively demolish the TPLF with its latest pretext of “fighting terrorism” and “enforcing law and order”.

When Russia announced a new military partnership with Sudan last year with a view to building a naval base on the Red Sea, that development would have caused much alarm in Washington. The US and its Gulf Arab client regimes are waging a war in Yemen for the control of the Red Sea.

China opened its first overseas military base in Djibouti – northeast of Ethiopia – which gives a prominent presence in the Red Sea. With Russia also about to increase its presence, Washington was no doubt compelled to make a chess move.

It seems no coincidence that the Trump administration announced last month that it was lifting decades of sanctions off the Sudanese government in Khartoum. That was on October 19. Then almost two weeks later, the war in Ethiopia erupted between the central government forces and the Tigray region.

The conflict in Ethiopia has appalling humanitarian implications given the country’s past horror of famines. The war also looks to be spreading out to embroil Eritrea which lies on the Red Sea north of Ethiopia.

But as ever, war and human suffering are the consequence of imperialist machinations.