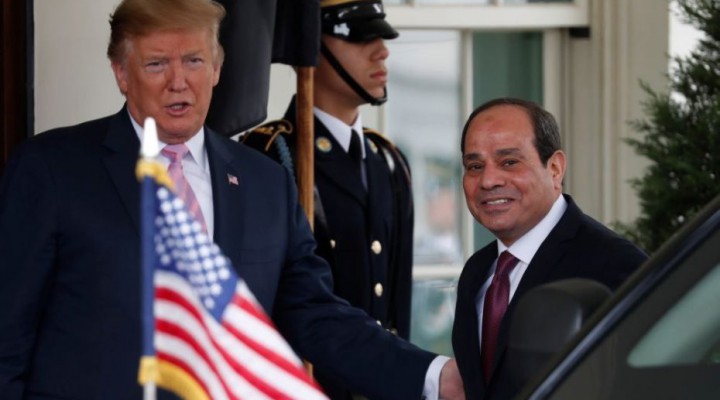 The Trump administration has weighed in to back Egypt in its long-running dispute with Ethiopia over a crucial hydroelectric dam about to come into operation.

The Trump administration has weighed in to back Egypt in its long-running dispute with Ethiopia over a crucial hydroelectric dam about to come into operation. Instead of taking a consensual approach to resolve the stand-off, President Trump has ditched a mediator role for the U.S. to become an advocate for Egypt.

In doing so, the White House is running the risk of alienating good relations with African nations. It appears that Trump is willing to trade that African loss for gaining leverage over Arab nations in pursuit of his Middle East ambitions.

Last week, Trump publicly backed Egypt in the dispute with Ethiopia over the latter’s construction of a $5 billion dam on the Nile – the world’s longest river. The project has been underway since 2011 and has over the years engendered a bitter row between Cairo and Addis Ababa. Egypt is concerned that it will be deprived of downstream river water which is critical for its agriculture centered along the Nile Valley.

For its part, Ethiopia claims that because it is the territorial source of the Blue Nile (the main tributary to the river), it therefore has sovereign right to harness the resource for its development.

Once the hydroelectric dam – the biggest in Africa – becomes operational it is hoped that it will meet Ethiopia’s electricity needs for its 100 million population and, in addition, be able to export power to surrounding nations.

Egypt points to a colonial-era treaty brokered with Britain in 1929 which ostensibly gives Cairo veto rights over development projects by other nations which share the Nile River. Ethiopia claims that treaty is obsolete.

On February 28, U.S. Treasury Secretary Steve Mnuchin intervened in the river row and cautioned Ethiopia not to proceed with filling the dam until it had Egypt’s final agreement. Ethiopia is planning to fill the dam over seven years to a capacity of 74 billion cubic meters. The Egyptians contend that the proposed rate of filling will be detrimental to its share of the Nile waters. The Ethiopians say technical studies show no loss to downstream nations.

Washington had up to then been taking a neutral stance on the matter, saying that it was acting as a mediator between Egypt and Ethiopia, both of which have strong ties with the US.

However, there seems to have been a recent change in calculus by the Trump White House. And the answer to that shift most likely resides in Trump’s ambition to gain leverage with Arab states in order to push his lackluster Middle East plans.

The 22-member Arab League resolved last week to back Egypt’s claims against Ethiopia over the Nile. That resolution will put pressure on Addis Ababa to refrain from going ahead with its plans to begin filling the dam.

By supporting Egypt’s position in the Nile dispute, the Trump White House appears to be seeking ingratiation with the Arab nations, specifically on the issue of his “deal of the century” peace plan between Israel and Palestine.

Significantly, the Arab League voted unanimously last month to reject Trump’s much-vaunted proposal for resolving that Mideast conflict. Even U.S. allies such as Saudi Arabia and Egypt have spurned the White House’s roadmap for peace as not delivering on “the minimum rights and aspirations of Palestinian people.”

Moreover, the Arab states have vowed to not cooperate with the Trump administration in implementing its Mideast proposal, which they view as a capitulation to Israel’s annexation of Palestinian lands after the 1967 Six Day War. Arab leaders are no doubt mindful too of the popular anger over what is seen as betrayal of the Palestinian cause.

Without token Arab support that means Trump’s much-hyped “deal of the century” is dead in the water. The president has been bragging for the past four years about how his presumed business genius would break through the decades-old conflict. To have forged a semblance of a deal to settle one of the world’s most-protracted wars would have boosted Trump’s re-election kudos.

This would explain why the White House is taking a sudden interest in the Nile impasse between Egypt and Ethiopia. By stridently advocating for Cairo, Trump is bidding to win over Arab states which might then be more amenable about endorsing his dubious Middle East plan.

But by derailing the Blue Nile dam project that move comes with a cost. Ethiopia and other East African nations, including Kenya, Uganda, and Rwanda, which would stand to benefit from greater access to hydroelectric power will view the Trump administration as depriving them of development plans. Other nations of the 54-member African Union will also see Washington as a Neo-colonial interloper, interfering in their affairs in favor of Arab states.

Last month when U.S. Secretary of State Mike Pompeo embarked on an Africa tour, it was viewed as an “anti-China mission”, whereby Washington was trying to proffer strategic partnership with Africa in place of China. It looks like Trump is about to blow that gambit in Africa over his Middle East ambitions.

Or maybe the “business genius” simply has a problem playing chess with tiddlywinks tactics.

Trump Doubles Down on His Island-Buying Spree