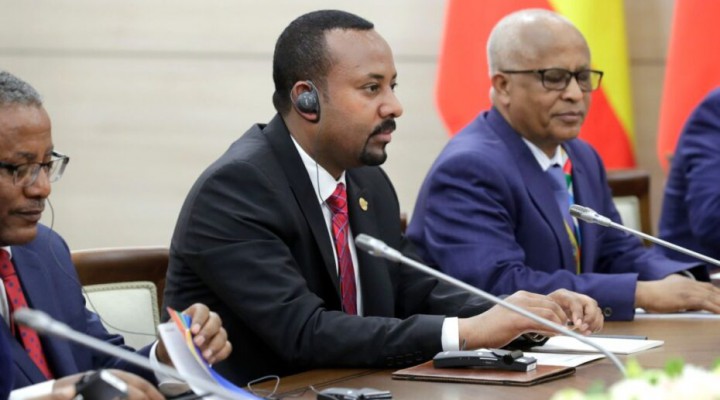 “It’s like an empire crumbling before our eyes,” is how one diplomat observing the crisis in Ethiopia was quoted as saying. There is no doubt that the historically important nation is facing a momentous threat to its existence.

After two years as prime minister Abiy Ahmed has overseen the collapse of a once strong and independent country, the only nation in Africa never to have been colonized by foreign powers.

The latest eruption of violence is centered on the northwest Tigray region which borders Eritrea and Sudan. Abiy has sent troops and warplanes to bring the oppositional stronghold under the control of the central government in Addis Ababa. Despite claims echoed by the state-run media that federal troops have succeeded in gaining control, the region remains defiant. Hundreds are reported dead from battles. But it is hard to confirm because the region has been cut off by the Abiy regime.

Incongruously, the prime minister who was awarded the Nobel Peace Prize in 2019 has rebuffed appeals from the United Nations to enter into negotiations with the Tigray leadership to avoid further bloodshed. There are fears that the military confrontation could lead to all-out civil war in Africa’s second most populous nation, dragging in neighboring countries in the unstable and poverty-stricken Horn of Africa.

Who is Abiy Ahmed?

The 44-year-old politician is currently the youngest African leader. He came to power in Ethiopia in April 2018 after much opaque political wrangling within a shaky coalition government. Abiy’s tenure was initially meant to be as caretake premier who would oversee elections. However, more than two years later he has postponed elections indefinitely under the pretext of safeguarding public health from the coronavirus pandemic. The Tigray region is dominated by the Tigrayan People’s Liberation Front (TPLF) which was formerly the ruling faction following a revolutionary war that ended in 1991. The TPLF were always wary of a hidden agenda behind Abiy. It refused to postpone elections in September and they claim that Abiy is now ruling like a dictator without a mandate.

Abiy was formerly a member of the TPLF-led coalition regime, serving as a minister of technology and before that as a military intelligence officer. While studying for his MBA at the private Ashland university in Ohio (see notable alumni), it is believed that he was recruited by the CIA. His later work as a government minister establishing national security surveillance systems under the tutelage of U.S. spy agencies would have given him immense political powers and leverage over rivals.

Abiy was awarded the Nobel Peace Prize in 2019 after almost one year in office as caretaker premier owing to a surprise initiative he embarked on with Eritrean dictator Isaias Afwerki. Controversially, Abiy refused to give press conferences to answer questions on the basis for his award. The settlement was supposed to put at end to a two-decade border dispute between Ethiopia and Eritrea following a three-year bloody war that ended in 2001. As a result, Abiy was generally hailed as a progressive reformer by Western media. The notable thing is, however, the purported peace deal did not deliver any practical improvement in cross-border relations between Eritrea and Tigray, the adjacent Ethiopian region. All of Abiy’s visits to the Eritrean capital Asmara have been shrouded in secrecy. No peace plan was ever published. And, crucially, Tigray people were not consulted on the deal-making undertaken by Abiy who comes from the Oromo region straddling central Ethiopia.

While Abiy was apparently seeking peace outside his nation, the picture inside was very different. As soon as he took power in early 2018, Ethiopia’s tapestry of multiethnic population of nearly 110 million dramatically unravelled from a surge in internecine violence and massive displacement. Prior to that, the federal structure of Ethiopia under the TPLF-led regime (1991-2018) had been relatively stable and peaceful. During those decades, while the socialist orientated authorities maintained close relations with the United States in terms of regional security matters, Ethiopia also pursued nationally independent policies in terms of economic development. Western finance capital was heavily regulated, while China became the main foreign investment partner involved in key infrastructure projects.

A major project is the Blue Nile hydroelectric dam which was inaugurated by the former TPLF prime minister Meles Zenawi who died in 2012. Set to become the biggest power plant in Africa, it was largely self-financed by Ethiopia. Western capital didn’t get a look in.

Nearly three months after Abiy’s catapult to power, the chief engineer of the Blue Nile dam Simegnew Bekele was murdered in what appeared to be an assassination. An investigation by the authorities later claimed it was suicide. Few people believe that from the suspicious circumstances, such as security cameras inexplicably failing and his security detail having been abruptly switched just before his killing. His wife was prevented from returning from abroad to attend the funeral.

The motive for the murder of the chief engineer was to throw the dam’s construction into disarray. The point was not stop its construction but to overhaul the financing of the project with the breakthrough input of Western capital to cover the $5 billion mega-dam.

Over the past two years, the entire federal nation of Ethiopia has been rocked by sectarian clashes. It is impossible to put an exact number on the death toll but it is estimated to be in the thousands. Political assassinations have become all too common whereas before Abiy’s ascent to office such violence was rare. It appears the deadly strife has stemmed from Abiy and his clique systematically replacing the political administrations in the constituent nine regional governments of Ethiopia. He has also sacked lawmakers in the central parliament in Addis Ababa, replacing them with his own flunkies. All the while the Western media have portrayed the moves as “democratic reforms” carried out by the Nobel laureate prime minister. Violence among the various constituent nations of Ethiopia, it is implied by Western media, is the result of revanchist old regime elements instead of being legitimate resistance to Abiy’s power grab.

The Tigray region has always had strong political and military autonomy. Its five million population is unified behind the TPLF leadership. Thus the northwest region represents an obstacle to the regime-change operation in Ethiopia being carried out by Abiy Ahmed and his foreign backers. Those foreign backers include the United States and Gulf Arab oil regimes who are seeking geopolitical control over the strategic Horn of Africa. For that regime change to succeed, Ethiopia’s political independence must be broken. And in particular the national resistance of the Tigray region must be vanquished.

It is sinister indeed that last weekend while Abiy was launching federal forces on Tigray and cutting off transport, electricity and communications, he flew to visit his Eritrean dictator friend, according to Tigray sources. There are deep concerns that the two politicians are forging a pincer movement to attack Tigray from the south and north on the back of a criminal siege strangling the region.