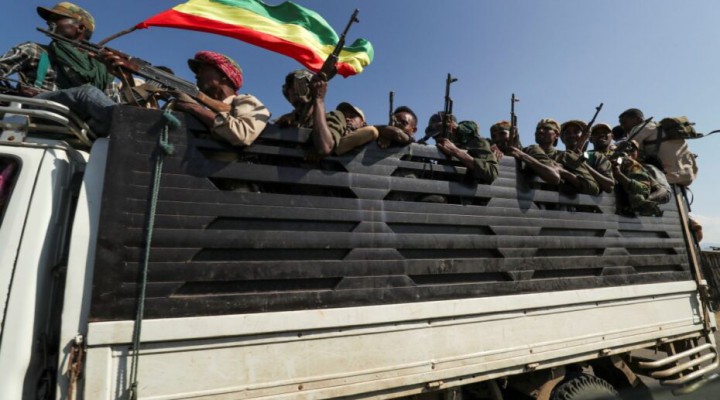 Africa’s second most populous nation is being plunged into catastrophic war which is also threatening to engulf the Horn of Africa. It’s scorched-earth geopolitics.

The two-week-old civil war in Ethiopia is now embroiling neighboring Eritrea. The two countries previously fought a two-year border war (1998-2000) which resulted in 100,000 dead. But in a bizarre twist, the Ethiopian central government in Addis Ababa is siding with Eritrea to now wage a war against its own people in the northern Tigray region.

The Ethiopian central government has also requested South Sudan to deploy 4,000 troops to augment its forces in the offensive against Tigray.

Leaders of the Tigray People’s Liberation Front (TPLF) admitted firing several rockets at an airport in Asmara, the capital of Eritrea, over the weekend. There were apparently no casualties, but the TPLF said the airport was a legitimate target because it is being used to dispatch warplanes belonging to Ethiopian federal forces to attack Tigray. Civilian centers in Mekelle, the regional capital of Tigray, have been hit with air strikes. Washington condemned the attack on Asmara as “unjustifiable” but has not condemned air strikes on Tigray.

Tigray leaders say they are fighting a war on two fronts: against Ethiopian federal forces coming from the south, and against Eritrean military crossing the border to the north.

More alarming, there are reports of the United Arab Emirates deploying combat drones to support the Eritrean-Ethiopian axis. The UAE maintains an air base in Eritrea’s Red Sea port city of Assab from where it has been flying drones in the Yemen war against Houthi rebels.

Ethiopian Prime Minister Abiy Ahmed has rebuffed appeals from the United Nations for peace negotiations. He has accused the TPLF of treason and terrorism, and is calling his offensive on the region of five million people a “law and order operation”. That is contradicted by a policy of what is blatant siege tactics and collective punishment against the civilian population. The region has been cut off from electricity and water supplies. Abiy’s warplanes bombed a hydroelectric power station last week in Tekezé, Tigray, and a sugar factory. His forces bombing civilian centers amounts to war crimes and state terrorism.

So much for Abiy being awarded the Nobel Peace Prize last year and Western media spinning his image as a “liberal reformer”. Abiy got the prize for his supposed peace-making with Eritrea soon after he became Ethiopia’s prime minister in April 2018. How he came to power is shrouded in mystery, involving backroom political deals. He was not elected.

Anyway, the curious thing about his so-called detente with the Eritrean dictator Isaias Afwerki is that so little is known about their private discussions. No details about the purported peace settlement have ever been published. Abiy, who comes from the Oromo ethnic group, never consulted with the Tigray people on what he discussed with Afwerki, even though it was the Tigrayans who suffered the brunt of the 1998-2000 border war. It was strongly felt that Abiy was cutting a deal to suit his own interests. Oddly, too, the seeming rapprochement was sponsored by the United Arab Emirates whose royal rulers donated an ornate gold medal and chain each to Abiy and Afwerki for their “peace efforts”. (A payment-in-kind worth several million dollars.)

But in practical terms, the people of Tigray and Eritrea (both are ethnic Tigrayans and share common family ancestry) have not seen any normalization in relations. The border remains closed and families are still prevented from traveling to visit each other.

This suggests the Nobel prize to Abiy was more about public relations to build up a benign international image. The accolade has come in useful during the recent offensive against Tigray. Western media routinely mention his Nobel prize alongside his claims of conducting a “law and order operation” against the “terrorist TPLF”. The Nobel gives him a vital credibility. Without it, his actions would be more clearly seen for what they are: crimes against humanity.

Since Abiy came to power, Ethiopia has been thrown into turmoil and violent clashes between its many ethnic groups. The Western media typically report that the mayhem is a result of “reforms” which are credulously said to have “lifted the lid” on internal tensions. It is never explained by the media how exactly these “reforms” somehow magically “lift the lid” on tensions.

What his reforms amount to is the formation of one-party rule under his leadership. He dissolved a coalition of parties last year known as the Ethiopian People’s Revolutionary Democratic Front (EPRDF) to form the Prosperity Party under his leadership. Abiy was previously a minister of science and technology in the EPRDF government, which contradicts claims that the old regime was privileging the TPLF faction. In any case, the Tigray faction refused to join his new unitary party. Then Abiy cancelled elections slated for this year, allegedly due to the Covid-19 pandemic. The TPLF accused him of seeking dictatorial powers and it went ahead with regional elections in September. He has never been elected by a popular vote.

That seems to have triggered the drive by Abiy to finally bring the TPLF opposition to heel.

Abiy’s targeting of the TPLF has been on the cards since he came to power more than two years ago. In Ethiopia’s nine regional administrations, it has been relatively easy for him to sack incumbents and to replace them with his own lackeys. That reshuffling caused much of the inter-communal violence, or what the Western media coyly refer to as “lifting the lid” on tensions. Not so the Tigray region, which has always been strong politically and militarily. The Tigrayans have long suspected Abiy as being a Trojan Horse figure whose purpose is to weaken Ethiopia’s political and economic independence in order to realign the strategically important nation away from partnership with China to be open for Western capital. Ethiopian sources say Abiy was recruited by the CIA when he previously served as a Lieutenant Colonel in military intelligence and liaised with American counterparts, before moving into politics. Ironically, he accuses the Tigray opposition of treason.

That is the geopolitical backdrop to the flare-up of war in Ethiopia. Washington and Gulf Arab states are aiming to decouple Ethiopia from China’s plans for global economic development, known as the “new silk routes”.

In doing so, however, Africa’s second most populous nation is being plunged into catastrophic war which is also threatening to engulf the Horn of Africa. It’s scorched-earth geopolitics.