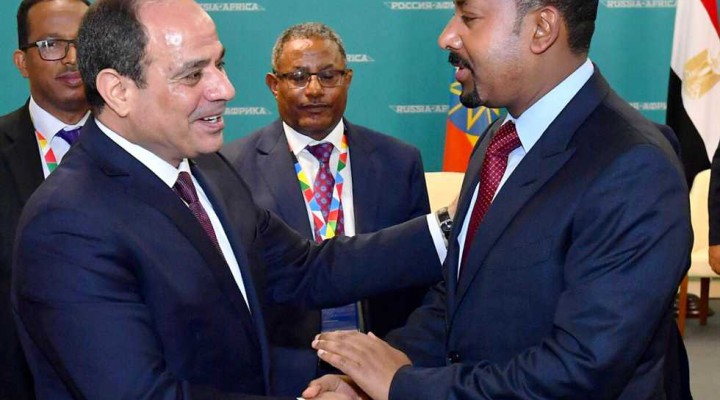 Is Trump trying to avert a war between Egypt and Ethiopia, or incite one?

Donald Trump’s warning that Egypt might ‘blow up’ Ethiopia’s Grand Ethiopian Renaissance Dam (GERD) to protect its vital water supplies raised many eyebrows. The US president not only made the dramatic prediction suddenly and without any prompting but justified and seemed to endorse and even encourage such action. Trump described the impasse over the dam as “a very dangerous situation because Egypt is not going to be able to live that way,” adding: “They’ll end up blowing up the dam. And I said it and I say it loud and clear – they’ll blow up that dam. And they have to do something…. They should have stopped it long before it started.”

The US president could not have been talking off the top of his head at a time when he is fully occupied with improving his re-election prospects. He must have had knowledge of Egyptian contingency plans to disable the dam after the failure of all efforts to reach a negotiated solution to the dispute, including the US mediation bid which he personally supervised. The Ethiopians snubbed him and began unilaterally filling the dam’s 76 billion cubic metre reservoir, with dire consequences for Sudan’s and especially Egypt’s water supplies.

The US administration hosted talks in Washington in September between the Egyptian, Ethiopian and Sudanese foreign ministers along with the IMF, and they agreed to a compromise deal to resolve the crisis and ease tensions. But then the Ethiopian minister refused to sign it and stayed away from the signing ceremony in brazen defiance of his country’s superpower ally.

The Egyptian government, which has been preoccupied with the Libyan crisis for the past two years as its overriding national security concern, pursued a policy of restraint in the face of Ethiopia’s escalation. It prioritised diplomacy and engaged with all efforts to reach a political solution, including the South-African-led OAU mediation, despite Ethiopian foot-dragging and duplicity. This was not out of weakness, according to an Egyptian expert on the issue: it was to absolve Egypt of any blame should it decide on military action as a last resort.

The Ethiopian government responded angrily to Trump’s warning, describing it as misguided and unproductive, summoning the US ambassador to lodge a protest, and vowing to defend itself if attacked. This indicates it intends to move on to the second, more serious, stage of filling the reservoir after having completed the first phase — again without any agreement with downstream Sudan and Egypt.

One is that he knows Egypt is poised to put its military contingency plans into action and spoke out in a bid to avert a war between it and Ethiopia.

The other is the conspiracy theory that, as Israel’s closest and most powerful ally, Trump intended to incite such a war by encouraging Egypt to attack the dam. The aim would be to start a conflict that exhausts the last remaining major Arab army deemed a potential threat by Israel — following the destruction of the Iraqi and Libyan armies and the bogging down of Syria’s army in an ongoing ten-year proxy civil war. Proponents of this view recall how comparable US incitement led to the Iraqi invasion of Kuwait in 1990.

Whatever the case, Egypt’s ruling generals certainly have military contingency plans in place, though the media have been strictly banned from discussing the possibility of war or rallying public opinion for it, so as to avoid causing alarm that could damage the country’s security, stability or economy. Many Egyptians will agree with Trump that something should have been done long ago to stop the dam being built.

Egyptian leaders have also concluded that Ethiopian Prime Minister Abiy Ahmed has been obfuscating and playing for time and has no intention of reaching a deal that would prevent Egypt from suffering a disastrous cut in water supplies. Ethiopia’s position is that it has a sovereign right to control all the water that flows through its territory and that the GERD is vital to its economic development.

The main reason Ethiopia feels it can act with such high-handedness and impunity is the active backing and incitement of Israel. It was Israel that originally conceived of the GERD project to put pressure on Egypt, and it has been deeply involved in it since its inception, providing expertise and funding as well as air defence systems to protect the site. The Egyptian military knows all this and more. It is unlikely to have been pleased by the recent agreement to normalise relations between Israel and Sudan even if it pretended otherwise.

Egypt’s military rulers know what war is and want to avoid it. But if it gets to the point where millions of the country’s people face famine, drought and destitution, vast areas of its farmland are laid to waste and its hydroelectric production is cut by half, then destroying the dam might be their only option.

0 thoughts on “‘Blowing up’ the Renaissance Dam”