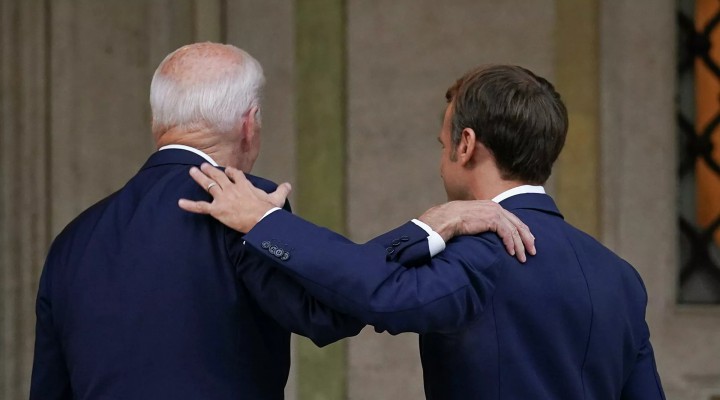 US President Joe Biden indulged France’s national hurt feelings by meeting with French President Emmanuel Macron ahead of the G20 summit this weekend in Italy.

The American leader was “hosted” by Macron at the French embassy in the Vatican, which in diplomatic terms is seen as deference to France.

Biden didn’t go as far as making a direct apology for the acrimonious row with France that blew up last month after the US cut Paris out of a €55 billion submarine contract with Australia.

That move had infuriated Paris which denounced it as a “stab in the back”. France then recalled its ambassador to the United States in protest, the first time that happened in over 250 years of bilateral relations.

In his meeting with Macron, however, all seemed to be smoothed over. There was a lot of touchy-feely fist bumping and shoulder massaging and declarations of ardent alliance.

“I want to make it clear, France is an extremely, extremely valued partner,” said Biden with Macron suitably smiling, having had his ego stroked from the American leader’s patronage.

On the actual submarine contract, Biden said: “What we did was clumsy, it was not done with a lot of grace.”

The US president gave the impression that it was an innocent oversight whereby France was not consulted about the switch by Australia to buy American submarines instead of French ones which Canberra had contracted to do as far back as 2016.

“I was under the impression certain things had happened that hadn’t happened,” said Biden, as if it had all been a silly accident.”

That feint of oversight is far from the truth. Despite Biden’s attempt to soothe French sensibilities, there was nothing “clumsy” about the US move to oust France in the Asia-Pacific. It was a deliberate bid for power projection.

The formation of the new military pact between Australia, the United Kingdom and the United States – known as AUKUS – is a bid to project military power more directly towards China.

Beijing certainly viewed it that way and condemned the reckless incitement of tensions in the region by Washington and its British and Australian partners.

France, and the European Union more generally, is seen by Washington as being too soft on China. Macron and other EU leaders have been reticent about adopting the US line of a more strident “containment policy” towards China. The signing of a landmark investment deal between the EU and China last year and the growing trade relations between the two has irked Washington.

France’s more ambivalent attitude towards China in which Beijing is viewed as a commercial partner despite geopolitical differences is not acceptable to Washington. The Americans are pushing a zero-sum policy of hostile containment towards China, a policy that has been pursued with consistency under Obama, then Trump and now Biden.

The United States saw an opportunity to hit French and European “softness” on China by kicking its €55 billion submarine contract with Australia. And Australian premier Scott Morrison, being the pliable politician that he is, was all too willing to do the American bidding.

Losing €55 billion in revenue and naval jobs is no small thing. For all Biden’s seeming appeasement of Macron there was no mention of how France might be compensated. The bottomline is “hard cheese”.

Aside from the money involved, the US contract with Australia now entails supplying nuclear-powered hunter-attack submarines rather than the French-designed diesel-electric vessels. The American subs will be able to patrol the South China Sea for longer periods and have stealth capability. They could also potentially be adapted to launch nuclear missiles as well.

In other words, the AUKUS pact is not just about grabbing a lucrative contract and side-lining the “soft” French in Asia-Pacific. It’s about projecting a more provocative military stance towards China.

Emmanuel Macron appears like a pathetic flunkey. He used the same touchy-feely ingratiation with former President Trump in the belief that he was somehow earning special respect from the White House. Likewise with Biden, the French leader appears to be overcome with bonhomie and a sense that he is back in the White House fold.

“Trust is like love: declarations are good, but proof is better,” said Macron during his kiss-and-fake-up meeting with Biden.”

“For me, it’s the future we need to look at,” the French president added.

From stab in the back to pat on the shoulder. France, as with the rest of the EU, has no autonomy or backbone when it comes to US policy. Even with a €55 billion kick in the coffers, Macron is easily appeased by a few crumbs of American indulgence.

The French leader likes to spout about European independence and forming a European Army separate from the United States and NATO. That’s all a pile of hollow bravado by a Napoleon-complex marionette.