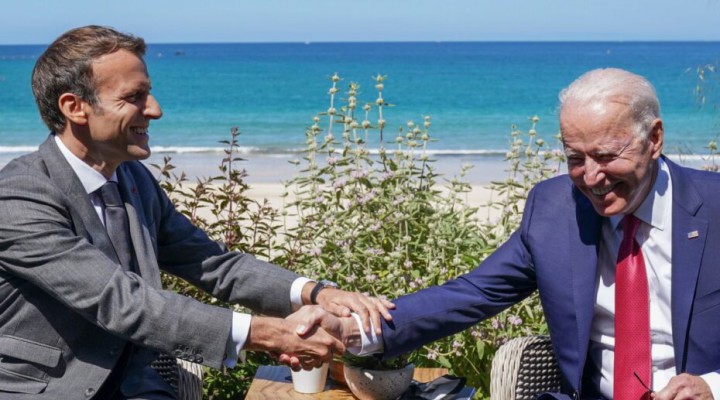 It’s not only France that is stunned by the Anglo-American skullduggery. The other European NATO allies were also left in the dark.

The Gallic gall erupting between France and the United States, Britain and Australia has overshadowed the new military alliance that U.S. President Joe Biden announced last week for the Indo-Pacific region.

That alliance was supposed to signal a U.S.-led initiative to challenge China. But the strategic move is turning out rather stupid and shortsighted as it has backfired to slam a hole in Washington’s alliance with France and wider NATO partnerships.

French President Emmanuel Macron has ordered the recall of ambassadors from the U.S. and Australia in a sign of the intense anger in Paris over the newly unveiled alliance known as AUKUS – standing for Australia, United Kingdom and the United States. The return of French envoys from these allied nations has never happened before.

What’s at stake is a €56 billion contract to build a fleet of 12 submarines for Australia by France that was first signed in 2016. That deal has been scrapped and replaced by a contract with the U.S. and Britain to supply Australia with eight nuclear-powered submarines. The French subs that were on order were diesel-electric powered.

That’s a huge loss in financial revenue for France as well as a hammer blow to French naval jobs and ancillary industries. But what’s more damaging is the stealth and a palpable sense of betrayal. The French were evidently hoodwinked by the Americans, British and Australians over the whole backroom deal.

France’s foreign minister Jean-Yves Le Drian did not beat around the bush to express the rage being felt in Paris at the highest level. “I am outraged… this is a stab in the back,” he fumed to French media on news of the new Anglo-American military alliance in the Indo-Pacific and the consequent cancellation of the French sub contract.

“There has been duplicity, contempt and lies – you cannot play that way in an alliance,” he added referring to the NATO military organization of which France is a prominent member.

Apart from the recall of its ambassadors, France has also cancelled a scheduled summit in London this week between French and British defense ministers.

Sir Peter Ricketts, a former British national security advisor and past ambassador to France, said the growing row was “just the tip of the iceberg”. He said it was much worse than when France fell foul of the United States and Britain back in 2003 over the Iraq War.

Ricketts told the BBC as quoted by The Guardian: “This is far more than just a diplomatic spat… this puts a big rift down the middle of the NATO alliance.”

What is particularly galling for the French is that the new U.S. alliance with Britain and Australia was obviously under private discussion for several months to the exclusion of Paris and other NATO members. The French only found out about the pact when it was announced on September 15 in a joint virtual press conference between Biden and his British and Australian counterparts, Boris Johnson and Scott Morrison.

When Biden made his first overseas trip as president in June this year to attend the G7 summit in Cornwall, England, and later to meet other NATO leaders in Belgium, there was no mention of the AUKUS plan. Biden even held a bilateral and apparently cordial meeting with Macron in Cornwall without any hint of the new alliance under formation nor the impending impact on the French submarine contract. More bitterly in hindsight, Biden also held a closed meeting with Johnson and Morrison during the G7 summit even though Australia is not a member of the forum. They must have discussed AUKUS in secret. No wonder the French are aggrieved by the contempt shown.

But it’s not only France that is stunned by the Anglo-American skullduggery. The other European NATO allies were also left in the dark.

Last week, European foreign policy chief Josep Borrell presented a new EU strategic vision for the Indo-Pacific region the day after the AUKUS alliance was announced. Borrell had metaphorical egg dripping off his face when he answered media questions about the U.S., UK, Australia initiative. “We were not informed, we were not aware… we regret not having been informed.”

The brutal irony is that Biden came to the White House promising that he would repair transatlantic partnerships with Europe and NATO which had been ravaged by Donald Trump and his browbeating over alleged lack of military spending by allies. When Biden visited England and Belgium in June it was something of a love-in with European leaders who swooned over his vows of “America is back”.

After Biden’s unilateral withdrawal from Afghanistan last month when European NATO partners were not consulted and their apprehensions were brushed aside, now we see Biden poking France in the eye and kicking it in the coffers with €56 billion pain.

“Political trust has been shattered,” said Frederic Grare of the European Council for Foreign Affairs as quoted by the Euronews outlet.

But the whole sordid betrayal and bickering have more than money and loss of trust involved – far-reaching though that those issues are.

Washington’s willingness to supply nuclear-powered submarines to Australia with British collaboration shows that the United States is moving ahead with a more reckless offensive policy towards China. Biden is explicitly declaring a strategic move to confront China more openly and provocatively, ramping up the hostility of previous administrations under Trump and Obama.

Beijing condemned the new AUKUS alliance as a harbinger of more “Cold War”, saying that it would bring insecurity to the region and lead to a new arms race. That may be an understatement as the Anglo-American alliance spells move to a war footing.

China warned that despite Australia’s insipid assurances to the contrary, the nuclear-powered submarines could be armed with nuclear missiles in the future. Beijing said Australia would be targeted for a nuclear strike in the event of any future war with the United States.

Biden’s strategic move to engage with Britain and Australia in order to threaten China is proving to be a loose cannon in relations with France and other European NATO allies. That speaks of Washington’s desperation to confront China.