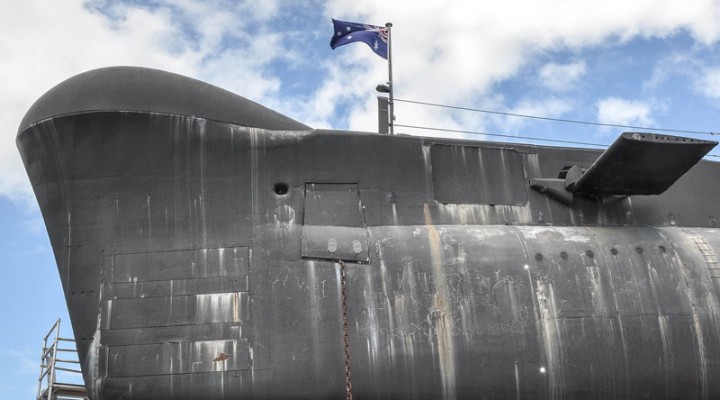 US President Joe Biden’s recent announcement of a strategic partnership with Australia and the UK to counter China would normally have attracted little notice but for an important addendum. Australia was also cancelling a multibillion-dollar contract with France for conventional submarines in favor of a US-UK commitment to provide Australia with nuclear-powered submarines. France took extreme umbrage at this announcement, which it viewed as a stab-in-the-back betrayal from an ostensible friend and ally. While Joe Biden and French President Emmanuel Macron have since talked in an effort to mend relations, the Biden administration’s diplomatic faux pas has drawn attention away from its developing strategy in the Pacific to counter China, and instead prompted an uncomfortable look at the dismal state of US-European relations. The controversy also reveals underlying structural cracks in the Atlantic alliance that seem bound to worsen.

The submarine controversy stems from Australia’s Collins class conventional diesel-powered submarine. Six were built from 1993 to 2003 after Australia had considered but rejected the idea of a nuclear-powered submarine. The decision to go forward with Collins was based upon two principal factors. When using electric batteries charged by the diesel power plant, the Collins class was extremely quiet, making it perfect for protecting the shallow sea lines critical to Australia’s economic well-being and security. Of equal importance was Australia’s lack of the civilian nuclear infrastructure to support a military nuclear power capability.

When the decision was made to replace the Collins class submarine, Australia again revisited the idea of a nuclear attack submarine and again rejected it. After an intensive search, Australia decided on a French nuclear powered attack submarine, the Barracuda class, which would be enlarged and modified to carry diesel engines instead of a nuclear reactor. Australia signed a contract with a French defense contractor, Naval Group, worth more than $40 billion, for 12 modified Barracuda submarines, which were dubbed the Attack class. As of July 2021, Australia had spent some $1.1 billion in initial start-up costs.

The French contract ran into significant problems, with cost overruns ballooning to nearly $60 billion and Australia expected to pay another $145 billion in maintenance over the lifetime of the Attack class. The Australian government of Prime Minister Scott Morrison began fretting about the cost of this new submarine and entered negotiations with Naval Group about restructuring the contract. In the meantime, Australia began talks with the US and UK about dumping the French contract in favor of a nuclear attack submarine provided by the US.

When Biden announced that the US, UK and Australia had agreed to replace the contracted French boats with nuclear-powered ones from the US, France was blindsided. On the same day that Biden made his announcement, Sept. 15, Naval Group received a letter from Australia noting that they were “satisfied” with the strategic review of the submarines and were ready for the “rapid signature for the second phase of the program.”

In response to what it saw as a betrayal, France recalled its ambassadors from the US and Australia. Moreover, French President Macron began publicly calling into question its relationship with the US, casting doubt on the US commitment to European security. Macron called upon Europe to reconsider its strategic defense relationship with the US and focus instead on developing its own defensive capabilities. While Biden and Macron eventually spoke via telephone, where the US President apologized for the optics of the US-Australian deal and Macron agreed to return France’s ambassador to the US, relations remain strained. The US’ diplomatic faux pas has shifted focus away from what was supposed to be a new alliance with the UK and Australia to contain Chinese ambitions in the Pacific and onto a broader discussion about the US commitment to European defense.

Without doubt, extensive damage has been done to US relations with France — and Europe more broadly — by the US’ collusion with Australia over the cancellation of the French submarine contract. Biden came into office pledging to restore European faith in the the US commitment to the trans-Atlantic alliance, which had suffered during the Trump administration. But in one fell swoop, Biden has probably done more damage than Trump ever did. Moreover, the casual and insulting way the US handled the announcement reflects a total lack of respect that France and its European partners simply cannot ignore.

But what can France and Europe do about it? For all French President Macron’s words about the need for Europe to develop its own defensive capabilities independent of the US, the fact is neither France nor Europe can afford to make such a commitment. Moreover, the US knows this — which is why the French and Europeans are treated so shabbily when it comes to to collective defense issues. The US pays for approximately 70% of the combat capability of the Nato alliance in the form of deployable ground, naval and air forces, and the means to sustain them. This unbalanced US-Nato relationship was visible in Afghanistan, where thousands of non-US Nato troops were deployed, but that was only possible with US help.

In Europe, it is the US alone that provides Nato with the ability to stand up to the perceived threat from Russian military power. There is no combination of European military power that could successfully face off against the Russians in a conventional ground war without US military assistance. In addition to combat capabilities, US intelligence and communications, along with air and sea transportation resources, are the backbone of Nato’s combat service support infrastructure. If you remove the US military, Nato will simply collapse.

Thus the US takes any threat by France or any other European nation, singly or in concert with others, to divorce themselves from the US defensive umbrella with a large grain of salt. For years now, Nato nations have struggled to meet the 2% GDP requirement regarding defense expenditures. If the US were removed from the European defensive structure, the cost of replicating lost capability would be crippling, with defense expenditures of over 5%-10% GDP required across the board. US armored brigades, it seems, don’t come cheap.

These calculations are based on Europe’s need to contain Russia. The defense expenditure estimates, however, change dramatically if the need to confront Russia is eliminated. The true danger of the cavalier US approach to Europe and Nato is that some nations, such as Germany and France, may opt not only to leave Nato but to do so without maintaining Nato’s confrontational stance against Russia. Instead, they might seek economic and political engagement with Russia.

Such an approach would not be greeted with open arms by all of Europe. While Germany, France and similar countries might support some form of Russian reconciliation, the former Soviet-bloc countries would not. One could readily envision an outcome in which the US would establish bilateral defense arrangements with Poland and the Baltics in place of Nato. While this approach might satisfy those US policy makers who view Nato as a money pit, any selective approach to European defense would create fractures in the European community itself. Today’s European unity could be replaced by a return to old-fashioned national self-interest, which sparked past inter-European conflicts that Nato and the EU were supposed to have relegated to history.

By bungling of the Australian submarine deal, the Biden administration has put itself right where it does not want to be—needing to repair relations with Europe when it planned to focus on China instead. Given the lack of respect that still exists in the Biden White House about European security issues, the odds are that the Biden administration will continue its policy pivot toward China. In doing so, President Biden will create further European resentment against a US ally seen as fickle and perhaps unreliable.

Sooner or later, Europe will make decisions about its security priorities. Alliances, like other relationships, do not flourish when one party treats the other poorly. If the pattern of the Australian submarine controversy continues, the US should not be surprised to find itself on the receiving end of a European divorce.