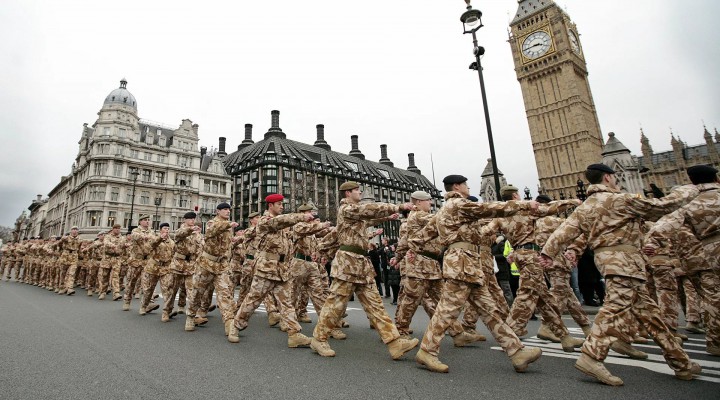 US President Joe Biden this week hailed a “historic” new military alliance with the United Kingdom and Australia – known as AUKUS – that is evidently aimed at China despite the latter not being specifically mentioned.

Such is Washington’s keenness to ramp up hostility towards Beijing that the US is to supply Australia with secret nuclear technology to build a fleet of nuclear-powered submarines. Those vessels will enable Australian naval power to increase its presence in the South China Sea.

Canberra rushed to assert that the submarines will not carry nuclear weapons. As a signatory to the Non-Proliferation Treaty that would have been a violation. Nevertheless, the acquisition of nuclear reactors to drive submarines opens the door to future weaponisation. The move by the US to supply this technology to Australia is an unconscionable weakening of international nuclear-proliferation controls – at the same time that Washington is lecturing Iran on that ostensible concern.

The trilateral military pact was unveiled this week in a virtual joint press conference by Biden and his British and Australian counterparts Boris Johnson and Scott Morrison. China slammed the alliance as driven by “Cold War mentality” and “ideological prejudice”. Beijing said AUKUS would increase insecurity and instability in the Asia-Pacific hemisphere in direct contradiction to what its participants claim.

Ultimately, though, it’s a sign of weakness, albeit pumped up with macho militarism. Washington realises that its waning power cannot contest with China alone. Hence, the US is enlisting the support of Britain and Australia to add weight to its military forces in Asia-Pacific.

The awkward moment when Biden couldn’t remember Australian premier Scott Morrison’s name, stammering about “that fella down under”, shows the cynicism behind Washington’s opportunistic outreach.

For the Brits, post-Brexit economic travails mean that the Johnson government is desperate to ingratiate itself with American power in order to cobble together a transatlantic trade deal. London is also trying to work up trade business with Australia. So lending British military forces for the Asia-Pacific is a bid to promote “Global Britain”.

Australia’s Scott Morrison is a pathetic flunky who is willing to toady to Washington even though he is jeopardising the Australian economy and millions of workers’ livelihoods by alienating his country’s biggest export market – China. Beijing has already curbed imports of Australian iron ore, cereals and wine in protest over perceived anti-China policies out of Canberra in hock with US hostility.

Morrison’s decision to align more explicitly with Washington by forming a formal military alliance that is provocatively pointed at China will rebound badly for Australia’s economy.

The unveiling of AUKUS seems to blindside other allies and partners. Canada and New Zealand – the other members of the so-called Five Eyes intelligence-sharing axis – were left out of the loop. In recent years, New Zealand has been more reluctant to adopt the anti-China rhetoric that Australia has willingly shown in deference to Washington. This is because China is also the biggest export market for New Zealand. In peeved reaction, the government in Wellington said that future Australian nuclear-powered submarines would be banned from its territorial waters.

But the biggest ruckus over AUKUS came from France which has as a consequence lost a $50 billion contract with Australia to build 12 submarines. That deal signed in 2016 was for the construction of diesel-electric vessels for Australia’s navy. Canberra has abruptly dropped the French for the Americans. The anger in Paris was palpable. French foreign minister Jean-Yves Le Drian described the move as a “stab in the back” and a betrayal.

The Afghanistan debacle is relevant here. Washington provoked howls of disdain among NATO members who complained that they were not consulted about Biden’s hurried withdrawal from Afghanistan. It was done as a fait accompli thereby undermining Biden’s erstwhile vows of a new multilateralism and respect for NATO partners.
This latest surprise move to set up AUKUS is another blow to NATO’s morale and trust in American leadership. It seems that the plan for the US, British and Australian military alliance was done behind the backs of other NATO allies and partners.

When President Biden met with G7 and NATO leaders back in June during summits in England and Belgium there was one notable trilateral meeting on the sidelines between the US president, Johnson and Morrison. Why Morrison should have been afforded this high-profile confab with Biden and Johnson was commented on in the Australian press as “unusual”. China was reportedly top of their agenda.

Australia is not a member of the G7 nor NATO. In hindsight, it seems obvious now that the three leaders were using the summit as a cover for discussing plans to set up AUKUS. That was three months ago and yet other allies were kept in the dark until this week.

Washington’s ambition to project military force at China is undermined by inherent US weakness to contend with China’s rise to power and so that necessitates forming ad hoc alliances like AUKUS and the Quad (US, Australia, Japan and India). Meanwhile, this outreach is inevitably creating tensions and overstretch for existing NATO allies and other partners.

Beijing is right. AUKUS is only leading to more instability and insecurity, including among America’s so-called allies.

0 thoughts on “Ruckus Over AUKUS”