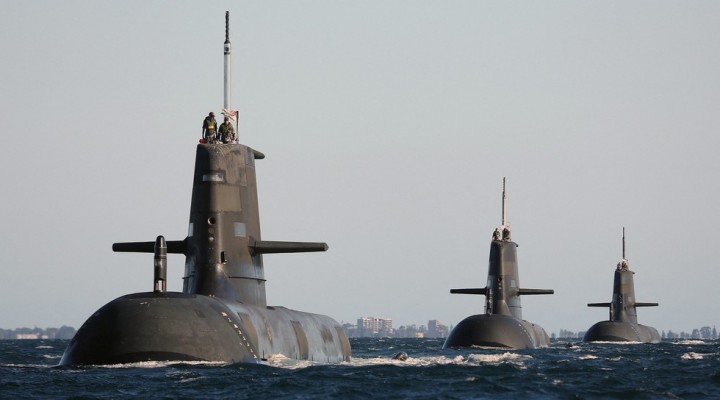 Australia struggles to keep its current six diesel-powered submarines operational; it now wants to build eight nuclear-powered submarines, despite having neither the trained manpower nor the nuclear infrastructure necessary.

This is a story of geopolitically driven military procurement gone mad.

Australia is an island nation whose very survival is dependent upon its ability to access strategic sea lines of communication (SLOCs) so that critical commerce links can operate on a sustained basis. In short, if any nation or group of nations were to cut off Australia’s sea links to the rest of the world, the country would eventually wither away and die.

Despite its impressive land mass, Australia is a relatively small nation, with a population of just under 26 million (making it 55th in world rankings) with a GDP of US$1.3 trillion (13th in the world.) The 2021 defense budget had Australia spending 2.1% of its GDP, or around AU$44.6 billion. Just under AU$16 billion of this was spent on the Australian Navy, which is comprised of nearly 50 commissioned vessels and over 16,000 personnel.

There are many problems with the Collins-class submarine, however. Design flaws and a shortage of spare parts impacted the operational availability of the submarines, costing Australians hundreds of millions of dollars in maintenance costs per year. And while each submarine was crewed by a force of some 60 specially trained personnel, there were only enough crew to operate three to four of the submarines at one time.

The Collins-class submarines are expected to end their service lives prior to 2030. The Australian government opted for a replacement submarine based upon an existing French nuclear submarine but replacing the nuclear propulsion system with a quieter diesel configuration.

Twelve of these submarines were planned to be built at a cost of between AU$40 billion and AU$50 billion. By 2021, however, these cost projections had exploded to over AU$90 billion to build and another AU$145 billion to maintain over their life cycle. Moreover, the first submarine would not be available until around 2034, requiring the Australian Navy to undertake a costly life-extension program for its existing Collins-class submarines.

Enter the United States. The US is currently fixated on the need to militarily confront China in the Pacific region but finds itself at a disadvantage when it comes to capability and regional support. While the US has leaned on the United Kingdom to increase its naval commitment to the Pacific, resulting in the high-profile deployment of major warships, getting Australia on board the counter-China campaign is seen as a major plus in terms of the credibility of any US-led naval deterrent.

Recognizing the potential afforded by Australia’s procurement debacle regarding the follow-on to the Collins-class submarine, President Joe Biden, together with British Prime Minister Boris Johnston, threw Australian Prime Minister Scott Morrison a political lifeline, enabling Australia to cancel its expensive Collins-class follow-on project, and instead replace it with a yet-undetermined nuclear-powered submarine design to be developed with the US and UK over the course of the next 18 months.

Australia was quick to accept the offer.

The beauty of the US-UK proposal is that there are no messy details attached – how much the program will cost, how Australia will operate advanced nuclear power systems when it has no indigenous nuclear power experience to draw upon, and, perhaps most importantly, how Australia plans on manning eight large submarines when it can barely field four crews for its existing Collins-class fleet?

Moreover, beyond the US-dictated operational premise of “challenging the Chinese,” the record is silent on how the acquisition of large nuclear-powered submarines will advance Australian national security. It is the silence and maneuverability which made the Collins-class submarine such a potentially lethal weapon. Any Australian fleet equipped with nuclear submarines will find it difficult to operate in the shallow waters that define the majority of the SLOCs they will be required to defend. Moreover, the noise and bulkier configuration of a nuclear-powered submarine will mean any future Australian force will be far less capable when it comes to killing a modern naval opponent, and far more likely to be detected and destroyed.

The reality is the US-UK offer to provide Australia with nuclear submarines is little more than domestic politics projected onto a theoretical geopolitical map of the US’ making. Australia was facing a fiscal crisis due to the exploding budget associated with the French-designed replacement for the Collins-class submarine, one that could threaten to bring down the government of Scott Morrison. Boris Johnston remains desperate for a platform from which he can project an image of UK geopolitical relevance. And Biden is in desperate need of being able to do the same for an American constituency reeling after the humiliation of losing a 20-year conflict in Afghanistan.

But the fact remains that the US has no meaningful military counter to China, the UK is not capable of sustaining any credible military presence in the Pacific, and Australia cannot afford to acquire and operate a force of eight nuclear-powered attack submarines. The Australian nuclear submarine project is a dangerous joke that only further exacerbates the existing geopolitical crisis with China by injecting a military dimension which will never see the light of day.