HOME / WORLD / AUKUS Is a Criminal War Footing Towards China 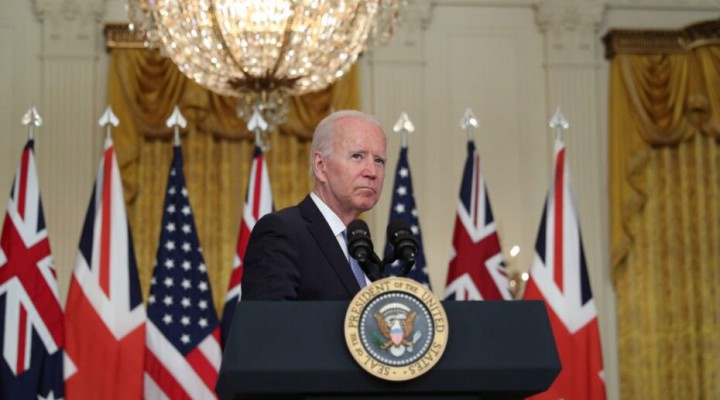 The objective is to subordinate Australia and Britain more tightly under Washington’s command for its war plan against China. Cutting the French out of the mix makes the line of command more direct for Washington.

The declaration of a new military alliance between Australia, the United Kingdom and United States – AUKUS – is a declaration of war intent towards China. The touchstone that is the tell of this aggression is the supply of nuclear-powered submarines to Australia by the U.S. and Britain.

Only a few days after announcing this new Indo-Pacific military alliance, U.S. President Joe Biden was this week addressing the UN General Assembly issuing a solemn appeal, among other things, to “save the planet” from adverse climate change. The complacency and hypocritical double-think are astounding. Biden is afforded a platform and respect at a forum originally founded on preventing aggression and war – only days after he unveiled a provocative war plan against China along with Britain and Australia.

The supply of nuclear-powered submarines to Australia is a categorically offensive move. Such vessels have a greater patrol range compared with conventional submarines and they are intended to allow Australian naval forces to sneak up on China. They can also be feasibly equipped with nuclear missiles despite official denials of this being an option. Australia is a non-nuclear state with obligations under the Non-Proliferation Treaty. It is therefore the party changing its status by violation of treaty obligations, not China.

In acquiring nuclear-powered submarines from the U.S. and Britain, Australia has cancelled an existing €56 billion contract with France to supply diesel-electric vessels. That decision has enraged Paris which denounced it as a “stab in the back” by allies. But what is more important about the decision is not the bickering and sordid stealing of lucrative business by one ally from another. The move from conventional submarine design to U.S. nuclear power is the key to understanding how grave the war agenda has become.

The AUKUS pact unveiled by Biden on September 15 in a joint virtual press conference with the British and Australian prime ministers did not mention China specifically. But that omission is more of the stealth that underpins the sinister new alliance. Nonetheless, Beijing was quick to condemn it as a provocation that would destabilize the Pacific region. China also warned that it would henceforth target Australia with nuclear weapons as a result of its military pact with the U.S. and Britain.

What is inescapably shaping up is a war footing by the United States, Britain and Australia towards China. Contemptibly, however, the Anglo-American leaders are playing down the criminal agenda, instead cynically claiming that the AUKUS pact is not a threat to anyone. Australian premier Scott Morrison even had the gall to say he was “open” to talks with China following the news of AUKUS and the nuclear submarines.

The Western mainstream media are also complicit in criminal complacency. Not one outlet has questioned or criticized the rationale for such a provocative military pact. The media parroted the unsubstantiated narrative that China represents a “growing threat” and “therefore” must be challenged. There is no explanation about how exactly China is supposed to be threatening global security. It is couched in vague terms such as that nation’s “expanding influence” or “footprint”. This false premise of posing a threat is adopted as if a fact that is then used to justify what is an unprecedented plan of aggression by the United States, Britain and Australia – the very type of aggression that the United Nations was established in 1945 to outlaw after the barbarity of the Second World War.

Michael Brenner, Emeritus Professor of International Relations at Pittsburgh University, is scathing of the Western duplicity and complacency.

He comments: “Once again, an American president is lying to us about a grave matter of war and peace. Biden’s team is bent on a confrontation with China that runs a heavy risk of war. And let’s make no bones about it, the war will be nuclear. We are the victims of a cascade of lies and deceit. The New York Times and other mainstream media are co-conspirators. Has anyone explained why the U.S. sees war with China as almost inevitable? Are we offered contrary views? No. We are marching in lockstep toward Armageddon.”

Brenner points to a prominent report in the New York Times on September 17 – two days after the AUKUS debut – which he says is a typical propaganda piece to conceal the danger and criminality of the U.S. war plan against China.

The NY Times’ report purports to explain the switch to nuclear-powered submarines as being the initiative of the Australian government. The impression given is that Canberra wanted to obtain this technology instead of the French conventional design because the former is “quieter”, has a longer range and is harder to detect. And, it is implied, it was only the Americans and British who could provide the superior alternative. It is almost made out by the NY Times that the Biden administration, along with London’s assistance, was doing Australia a favor to help it extricate from contractual obligations to inferior French subs.

But as Brenner points out, France had originally offered Australia the nuclear design. “France’s own submarines are nuclear powered whose performance is on a par with American submarines,” he notes. It was Australia that originally went for the conventional option in order to save money. If Canberra somehow deemed a new strategic need for nuclear design, then the easiest and least expensive option would have been for France to supply the nuclear-powered subs to Australia, not ditching the existing contract and going ahead with a new deal with the United States and Britain. In other words, economically and logistically, the AUKUS supply arrangement does not make sense for Australia. So what’s really going on?

Here’s where the NY Times’ report let slip the real story. It refers to how the “Biden administration began engaging Australia and Britain seriously about its emerging strategy to counter China” in the lead up to sabotaging the French submarine contract.

The report adds: “And it was a sign that as Mr Biden begins to execute what the Obama administration, 12 years ago, called the ‘pivot to Asia’, there is the risk of stepping on political land mines as old, traditional allies in Europe feel left behind.”

It was therefore not Australia’s initiative to drop the French contract or to go nuclear. It was the Biden administration.

The objective is to subordinate Australia and Britain more tightly under Washington’s command for its war plan against China. Cutting the French out of the mix makes the line of command more direct for Washington. That’s what makes the U.S. war plan with its AUKUS surrogates all the more deliberate and imminent. And criminal.

0 thoughts on “AUKUS Is a Criminal War Footing Towards China”