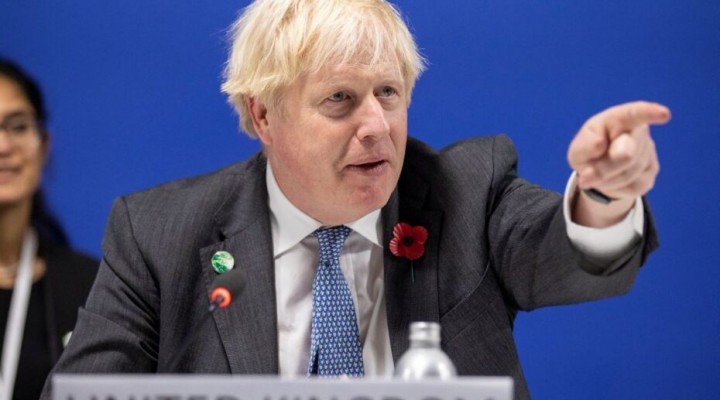 As the saying attributed to Karl Marx goes: history repeats itself first as tragedy then as farce. Another axiom cited by Boris’s hero Winston Churchill is: those who fail to learn from history are doomed to repeat it.

Europe should give up supplies of natural gas from Russia and instead defend Ukraine and Poland. That’s the plucky advice of Britain’s Prime Minister Boris Johnson who counts wartime leader Winston Churchill as one of his political heroes.

Addressing a City of London banquet this week, Johnson warned Germany, France, Italy and other European governments: “We hope that our friends [in Europe] may recognize that a choice is shortly coming between mainlining ever more Russian hydrocarbons in giant new pipelines and sticking up for Ukraine and championing the cause of peace and stability.”

Note the pejorative use of the word “mainlining” which implies Europe’s trade with Russia for gas is a sordid addiction, rather than a mutual commercial partnership.

Johnson also pointed to British troops being deployed to Poland helping that country construct barbed-wire barriers for halting the flow of refugees from Belarus as an example of “defending Europe”.

In the facile, elitist world of Boris, whose slapstick hairstyle is a reflection of disarray in the grey matter beneath, he has an “easy” solution for Europe’s energy supply shortages and soaring prices. That is, cut off potentially abundant, affordable exports of natural gas from Russia – which will plunge European households into freezing conditions and ramp up consumer inflation.

But don’t worry about that grim hardship. Boris’ noble defense of Poland and Ukraine against alleged Russian hybrid warfare and aggression will likely start a hot war that in turn will spiral into a thermonuclear conflagration engulfing the continent of Europe. That’s one way of “solving” freezing conditions, we may suppose.

Johnson’s advice to Europe is like listening to a clown smoking a reefer near a gasoline spigot.

His rosy British war history paints Poland and Ukraine as victims of aggression. The current scenario is contrived to evoke memories of Britain declaring war on Nazi Germany after the Third Reich invaded Poland in September 1939. Never mind that Britain and Poland’s fawning over the Fuhrer in the run-up to the Second World War was a major precipitating factor in eventually igniting that war.

Johnson’s cartoon-history speech at the City of London banquet implies that Russia is the contemporary incarnation of Nazi aggression. Those horrible Ruskies are supplying Europe with up to half of its natural gas fuel which is keeping European homes warm. How utterly fiendish of the Ruskies! So, in Boris’ logic, we must cut off this nefarious gas “weapon” used by the Russians to stop Europe from freezing.

While we’re on the subject of freezing, it is the Polish military with the help of British troops who are drenching hapless refugees in the middle of winter with water cannons to prevent them from entering the European Union from neighboring Belarus. The predominantly Middle Eastern refugees are in Belarus largely as a result of criminal wars waged by the United States, Britain, Poland and other NATO members over the past two decades.

Britain and its NATO partners have weaponized Poland and the Baltic states to antagonize Belarus, as well as Russia. While the Polish military erects razor-wire fences against freezing, huddled women and children, it is barbarous acts like this that evoke the heinous memory of fascism and aggression in Europe. Poland, the Baltic states of Lithuania, Latvia and Estonia, and Ukraine are steeped in complicity with past Nazi crimes, despite their obdurate denials. The cruelty being meted out to refugees today is shockingly consistent, although dimwits like Britain’s Johnson arrogantly pronounce on history with an upside-down distortion.

It’s not just Johnson though. European Union leaders are decrying Russia for “masterminding hybrid warfare” with Poland, the Baltics and Ukraine. When it is the EU that is funding the rolling out of barbed wire concertinas and militarization of borders across Europe. This effete cowardice and duplicity of Europe’s political class have echoes of the past too in the face of fascism.

France’s President Emmanuel Macron this week reportedly warned Russian leader Vladimir Putin that NATO will defend Ukraine if the latter is invaded by Russia. Such hypothetical hyping is insulting.

Russia has no intention of invading Ukraine or any other European country. Where’s the evidence? Where’s the reasoning? This shrill scenario is entirely dreamt up by NATO propaganda and Russophobia.

The Ukraine has been a NATO spearhead for aggression towards Russia ever since the U.S.-led military bloc backed a coup d’état in Kiev in 2014. The Kiev Neo-Nazi regime is waging a low-intensity war against the ethnic Russian population of Southeast Ukraine. NATO is arming the regime to the teeth, the latest weaponry including attack drones from Turkey.

The U.S. and other NATO members are also increasingly conducting war drills in the Black Sea on Russia’s border. The tensions with Russia are compounded by the militarization of the refugee crisis between Belarus and Poland and the Baltic states.

If an analogy is to be made between the Second World War and the present it is that Russia is once again being subjected to aggression. Instead of the Nazi Wehrmacht over-running Poland, the Baltics and Ukraine it is the U.S.-led NATO axis.

Clowns like Britain’s Boris Johnson and France’s Emmanuel Macron are fanning aggression and the danger of war with fatuous speeches about “defending” Europe.

As the saying attributed to Karl Marx goes: history repeats itself first as tragedy then as farce. Another axiom cited by Boris’s hero Winston Churchill is: those who fail to learn from history are doomed to repeat it.

Lamentably, we are living in such a time.