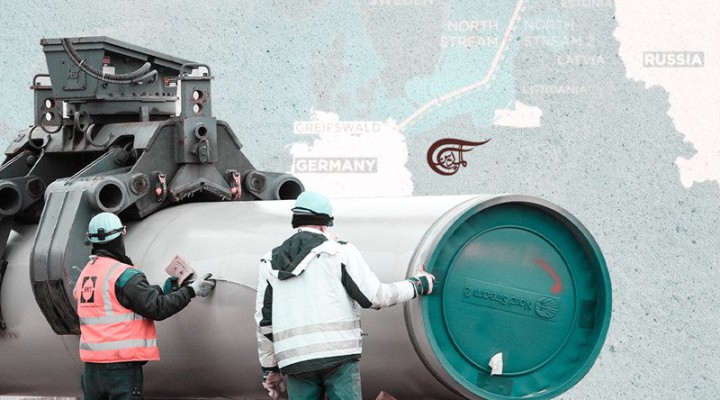 Behind the calls for Russia to ‘open the taps’ on Russian gas to supply Europe, is the desire to compel Russia in order to supply Europe with gas through the Ukraine pipeline.

As long ago as 2010, Anglo Codevilla, writing in The American Spectator, pinpointed the precise moment in wake of the 2008 financial crisis, when the US élites “asserted their right to decide, ad hoc, on the crisis response [of bailing out the banks] … And on so many other matters – supposing these issues to be beyond the general public’s understanding…”.

“The ruling class”, Codevilla wrote, “…was formed by an educational system that exposed them to the same ideas, and gave them remarkably uniform guidance, as well as imbued tastes and habits. These amount to a social canon of judgments about good and evil, complete with secular sacred history, sins, and saints. Using the right words and avoiding the wrong ones when referring to such matters — speaking the ‘in’ language — serves as a badge of “identity”.

Predominantly, it is today the ‘unvaxxed’ who are pronounced morally inadequate, poorly educated – and even equated to medieval ‘flat-earthers’.  The scope of the new moral ideology extends more widely, however, and includes those who fail to embrace the green agenda and LBGTQ rights – uncritically.

This ruling élite discourse has now penetrated ‘Science’, fracturing it into a series of non-sequiturs, backed by forcible mandates. ‘Science’ now relies more on enrolling ‘allies’ (such as Big Pharma) in a process of ‘black boxing’ claims.  Facts then become ‘black boxes’ which become resistant to opening — and to scrutiny.

Thus, key segments of domestic society are being morally shamed and exiled from full participation in their societies – and threatened with sanctions, which if implemented, could destroy their livelihood. What is occurring in tandem is that this exclusionary ideology is being turned outwards. Now, it is Hungary and Russia who, in the ‘in’-language of identity, become the flat-earthers who simply do not see the ‘climate emergency’ correctly – It is being beyond their elementary understanding.

So, Russia today is being deemed responsible for Europe’s soaring gas prices – simply because it fails properly to comprehend the imperative of Europe reaching ‘net zero’ carbon emissions as soon as possible.  Russia’s climate ‘illiteracy’ is the problem, European leaders condescendingly suggest; Russia needs to pump more gas to Europe — it’s as simple as that.

Behind the gas and energy crunch in Europe, however, (some of which answers to a warm dry summer across much of the globe; but much of which is self-inflicted: through EU competition policies, by allowing gas storage to dwindle; and the rush to ‘net zero’), there is a geopolitical dimension that the EU is using for its own particular ends.

The Establishment media insist on this politically self-serving narrative about Russia not supplying Europe with sufficient gas – because sustaining a narrative ‘dividing line’ has become more important to the political class than getting the policy approach to the energy crunch straight.

For, behind the calls for Russia to ‘open the taps’ on Russian gas to supply Europe, is the desire to compel Russia in order to supply Europe with gas through the Ukraine pipeline. To reinforce this stance, the EU’s Third Energy Directive is being weaponized – through delaying (for several months) the EU regulatory approval for authorizing Nordstream to begin pumping gas.  If it were authorized, the pipeline would be ready and waiting.

The point here is that Russia, being compelled ‘to turn on the gas taps’ – via the Ukraine pipeline – would not only benefit Kiev through additional transit fees (Zelensky is demanding $3 billion), but it would also liberate certain EU eastern states from their fear of becoming hostage to any putative Germany ‘monopoly’ over European gas supply via Nordstream 2.

But, were Russia to do the EU bidding, and Gazprom to supply gas via Ukraine, then the cry from Brussels – for sure – would be: ‘See! Europe doesn’t need Nordstream 2’ after all.  We can get the gas via Ukraine’ (and thus will gain a Ukrainian pressure point over Russia).

Codevilla, in his now decade-old, prescience, defined our ruling classes as having as their “first tenet that ‘we’ are the best and brightest, whilst the rest of humankind are retrograde, racist, and dysfunctional – unless properly constrained”.

So, the EU has adopted in energy, as on other trade issues, the self-attribution of the Euro-area being an extraordinarily significant monopsony (‘monopoly’ is where there is one seller; whereas ‘monopsony’ is where there is one dominant buyer).  The EU uses its heavily regulated and controlled market as the cudgel to project its ‘power’ — and as leverage to try to force suppliers, such as Gazprom, to sell energy to Europe below cost (as the privilege to supplying this élite 400m. population market).  Because we are the best and the brightest.

Russia, of course, will fulfil its obligation to transit gas to Europe through Ukraine, to the last BTU of its contractual obligation – but not a single BTU more.  And it will not be held hostage by the EU’s Third Energy Directive. The EU is not a gas monopsony. Russia can sell its gas elsewhere (in Asia). Nordstream can stand empty for the coming months if it needs to be.

If this is not properly understood, many Europeans will go cold and hungry this winter.