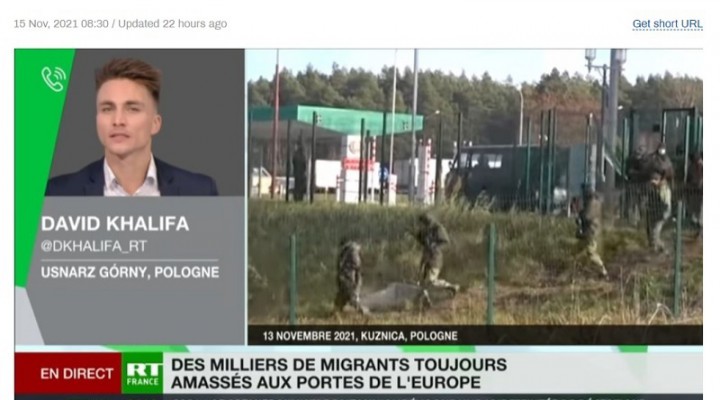 Exclusive- Two of RT France’s journalists were detained in Poland after violating that country’s state of emergency along its border with Belarus. In their article about this incident, RT itself acknowledges that “Poland has banned journalists from working near its frontier with Belarus since September” and even quotes one of the detained as saying that “On several occasions they asked us to leave and not to film.” According to that same detained journalist, “We are journalists and we wanted to show what was going on. And Poland persists in not allowing us to do our job. We’ve seen a sort of repressive action by the police, who are not just very tense, but also act quite aggressively.”

In their defense, they might have felt very passionately about the issue considering the claims that human rights abuses might be taking place in the border zone where the media has been prohibited from reporting since September’s state of emergency. Nevertheless, they were still not allowed to be there. Even worse, they were asked “on several occasions…to leave and not to film” yet continued to defy the authorities. Had there been a credible chance that their refusal could have resulted in them obtaining – and just importantly, retaining – evidence of serious crimes being committed in their proximity, then they’d have been morally justified in continuing to defy those official orders.

That wasn’t the case, though. Not even RT claims that their detention prevented such evidence from being obtained. Its French bureau’s journalists were therefore wrong to break the law, especially since they’re foreigners. They likely just got carried away chasing what they sincerely thought would be a major scoop about such an emotive issue, but their failure to follow the law after being repeatedly requested to do so might regrettably be exploited by hostile forces to continue pushing politically Russophobic information warfare narratives. In particular, it might be speculated that RT’s Kremlin patron ordered them to stage an international provocation on the border by getting arrested.

The purpose in doing so, it might be believed, could have been to contribute to the innuendo that Poland has something to hide by banning journalists from the Belarusian border. That interpretation of the Russian government’s motives isn’t credible though since Western forces are already pushing such a narrative and have much more believability in this respect among the global mainstream than RT does. After all, it’s well known that Russia and Poland are in a state of unprecedented post-Old Cold War hostilities at the moment. RT is considered a so-called “adversarial” media outlet by the West. Its potential contribution to the earlier mentioned innuendo therefore wouldn’t be taken seriously.

Since there was arguably nothing of “perception management” or “strategic communications” significance to be gained by staging a provocation near the Polish-Belarusian border and such an incident actually risks fueling politically Russophobic information warfare narratives, objective observers can safely discard the potential theory of a secret Kremlin hand behind the latest incident. What actually seems to have happened is that two intrepid journalists got carried away and defied the Polish military’s orders without having been told to behave in such a disrespectful and illegal manner by their employer. RT France might publicly support its journalists, but in private, it’s probably furious with them.

Once again, it needs to be clarified that if those journalists had any credible reason to believe that defying the authorities’ orders could have resulted in them obtaining – and just as importantly, retaining – evidence of serious crimes being committed in their proximity, then they would have been morally justified in refusing to comply. Since that wasn’t the case and not even their own employer is claiming otherwise, they should be considered as having broken the law for no journalistic or strategic benefit (the latter of which is connected to the explanations put forth in the preceding two paragraphs). This was an unfortunate incident and one that RT and Russia’s supporters should hope doesn’t happen again.