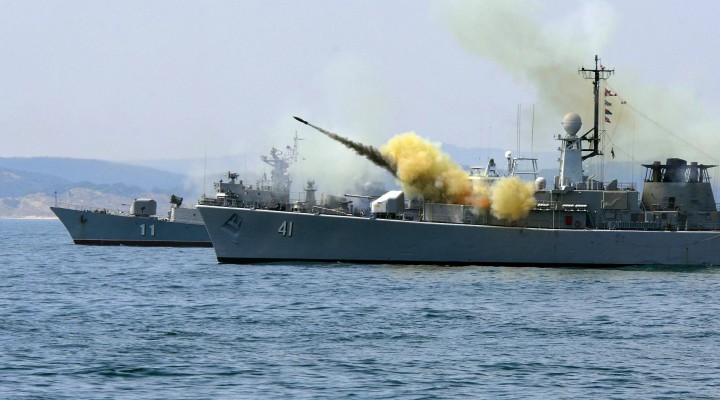 A basic rule of fire safety is to isolate flammable material. The United States and its NATO allies are doing the opposite in the Black Sea, piling up an incendiary situation right on Russia’s borders.

A flotilla of NATO members is currently carrying out war drills in the area. They include Romania, Bulgaria and Turkey. Sinisterly, the naval forces of Ukraine are also involved, even though it is not a member of the military alliance. The NATO-backed Kiev regime has continually accused Russia of “aggression” and plotting to invade its territory.

What gives the current NATO maneuvers a more explosive character is the arrival of American warplanes and warships that are crucial for coordinating a large-scale military offensive. In short, this is a war-footing.

This week, USS Mount Whitney, the flagship of the US Navy’s Sixth Fleet, entered the Black Sea. The main purpose of this vessel is to act as a command centre. It has a history of deploying in key military interventions such as in 2011 when the US and its NATO allies bombed Libya and overthrew the government. Also, it was involved in the war over South Ossetia in 2008 when NATO-backed Georgian forces to mount an offensive which prompted Russia to intervene. USS Mount Whitney, the flagship of the US Sixth Fleet
© AFP 2021 / Petras Malukas

Ominously, the arrival of USS Mount Whitney in the Black Sea coincided with the extensive patrol of a heavy-duty US Air Force reconnaissance plane. The E-8c flew for five hours over the Black Sea on Tuesday, according to Russian air defence data. The Boeing aircraft is an intelligence and communication platform which is deployed for coordinating attacks.

It appears that the deployment of these coordinating air and sea command centers came as a “surprise” to the Russian military. That is, the NATO drills had not given obligatory notice to the Russian side of the scale of involvement. Russia has since been able to fully monitor the movements, but the apparent surprise from the deployment suggests that it was a calculated provocation. To line up offensive forces on another’s border is bad enough, but to then bring in command centers for coordinating a potential attack is taking the provocation to a higher level.

NATO forces have been steadily building up capability in Ukraine and the Black Sea. The traffic of warships and planes is accumulating. Russian Foreign Minister Sergei Lavrov said the buildup is an attempt to “contain” his country. That in itself is a form of aggression.

One can only imagine the furors if Russian warships and planes were coordinating with Cuban forces near Florida. Indeed, the last time something like that happened – the 1962 Cuban missile crisis – the United States threatened to start World War Three.

Last month it was reported that NATO member Turkey is supplying attack drones to the Ukrainian military for offensive operations against the breakaway republics of Donetsk and Lugansk. Those areas are largely populated by Russian-speaking people who never recognised the US-backed regime installed in Kiev.

The United States has sent billions of dollars worth of lethal weaponry to the Kiev regime which has been waging a seven-year war against the pro-Russian population in southeast Ukraine. Ironically, Kiev and its US patron accuse Russia of threatening Ukraine with invasion. That is turning reality upside down. It is Russia that is being openly threatened by the United States and NATO who are using Ukraine as a spearhead. This seems to have been the strategic aim ever since the US sponsored the 2014 coup d’état in Kiev that brought to power an anti-Russian regime that glorifies Nazi antecedents.

Washington’s militarisation of Ukraine and the Black Sea is reaching a dangerous flashpoint. One spark of misunderstanding could ignite a war between nuclear-armed powers.

The unhinged Kiev regime is being emboldened to ramp up its attacks on the people of southeast Ukraine in violation of the 2015 Minsk peace accord.

The question is how much of this is a deliberate provocation by the United States and its NATO accomplices towards Russia?

Piling up incendiary elements can be due to incompetent stupidity. But in the case of an arsonist, the acts are willful. Even if a match is not struck, there is an intent of aggression and terrorism. A view shows Russian warships on sunset ahead of the Navy Day parade in the Black Sea port of Sevastopol, Crimea July 27, 2019.
© REUTERS / ALEXEY PAVLISHAK

What is taking shape in Ukraine and the Black Sea on Russia’s borders is moving beyond a US-led war drill and something resembling an offensive mobilisation.

Given Russia’s harrowing experience of foreign military invasions and aggression, it is doubly provocative what the United States and its partners are doing. If they wanted to reprise the memory of the Third Reich’s Operation Barbarossa when Nazi Germany invaded Russia through Ukraine they are doing it right now.

The reckless aggression by the United States and its NATO minions is the stuff of the Nuremberg Trials.

Ukraine Is Dying A Deindustrialized Death