HOME / WORLD / What Can Russia Do About NATO Hostility? 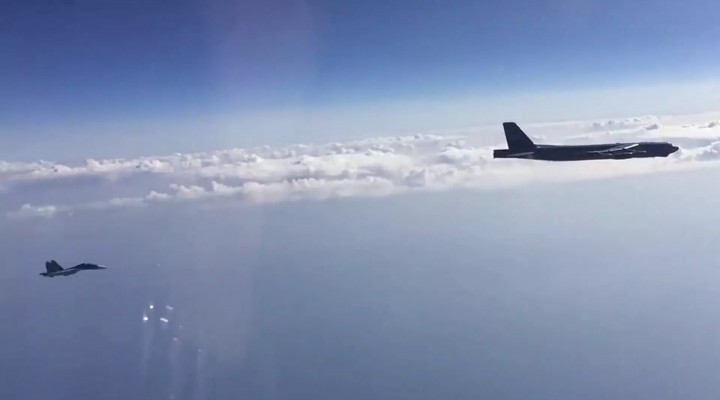 The United States and its NATO allies are ratcheting up hostility towards Russia with unscheduled military drills in the Black Sea. Absurd accusations about Russia planning to invade Ukraine are also part of the provocations winding up dangerous tensions.

Russian Foreign Minister Sergei Lavrov has condemned aggressive conduct as a threat to national and international security. He warned that as a result of the hostility, the Russian Federation may take “asymmetrical responses”.

“We will act in a reciprocal manner, and if necessary, also asymmetrically,” said Lavrov in regard to a surge in NATO drills near Russia’s borders.

First of all, it should be said that the conduct of the US and its NATO is totally out of order. The unprecedented increase in warships and surveillance planes near Russia’s borders is tantamount to aggression. Under international law that is criminal conduct.

More sinisterly, the unscheduled NATO drills point to the probing of Russian defense systems that are coupled to the threat of offensive operations by the Kiev regime against the Russian people of Southeast Ukraine and against Russia’s territory. The NATO buildup is emboldening the risk of all-out conflict.

Therefore, in these circumstances, Russia has a right to respond on the basis of self-defense from an extant threat to its national security. A reciprocal response would be firing warning shots at NATO aircraft or vessels in a similar way to when a British destroyer HMS Defender approached Russian territorial waters in June.

Another reciprocal measure could be Russia conducting naval and air drills off the US coast. The predictable apoplectic reflex by the Americans in that scenario would go to illustrate the rank hypocrisy and double-think of what they are doing presently in the Black Sea on Russia’s doorstep.

But what about more subtle asymmetrical responses? These could be far more effective in hitting the US and NATO bullying behavior where it hurts. And being more oblique, such retaliation would be harder to politicize by Washington.

Note, we are not talking here about the fallacious Western hype about imagined Russian “hybrid warfare”. Such as alleged Russian interference in Western elections and domestic politics, or alleged Russian cyberattacks, or orchestrating the flow of migrants into the European Union. All those purported malign activities attributed to Russia are in the realm of hoax and the West’s anti-Russian propaganda. In any case, Moscow has rejected all allegations of this kind of hybrid warfare.

Instead, what we are talking about are legitimate, asymmetric responses to exact a sobering cost on the reckless policy of Western states for threatening Russia. And, indeed, threatening international peace.

US-based political analyst Randy Martin says that Russia has quite a few aces up its sleeve.

Another vital domain is Russia’s outsized role in the export of oil, gas and cereals, says Martin. We are not talking about a vulgar “weaponization” of trade. But it is Russia’s prerogative as a supplier to modulate the price and supply of its natural resources.

“The West is choking on petrol and gas costs and cereal production. Inflation is about to blow up in Western economies,” comments Martin. “Russia could make the supply chain crisis afflicting the West a lot more problematic.”

If Russia were to tweak these global markets in its favor, as it has a right to do, then the repercussions for faltering Western economies would be severe. Already, the rocketing consumer price inflation in the US and Europe is stoking social and political discontent. If prices at the pumps or household energy bills go up any further, Western governments will have a lot more to worry about from their own restive populations than flying recon airplanes over Ukraine and the Black Sea.

There are other options available to Russia for responding to US and NATO provocations. Moscow could restrict the airspace over Russia for Western commercial flights crisscrossing Asia and the Pacific and vice versa. The extra fuel costs for longer flights would be painful for an industry that is already in big financial trouble.

Then there is the old chestnut of ending dollar imperialism. A major shift already underway is Russia’s push to replace the US dollar as the primary international trading currency. Along with China, Russia has significantly “de-dollarized” its holdings and trade in recent years. Weakening the position of the dollar as a fiat currency would perhaps be the biggest blow to US global power. The more the US and its allies act unreasonably towards Moscow and Beijing the more determined they will be in undermining the privileged and unjustified global reign of American capitalism.

Like the laws of physics, to every action, there is an equal and opposite reaction. It’s geopolitical karma. Russia can cash in a few big chips.

0 thoughts on “What Can Russia Do About NATO Hostility?”