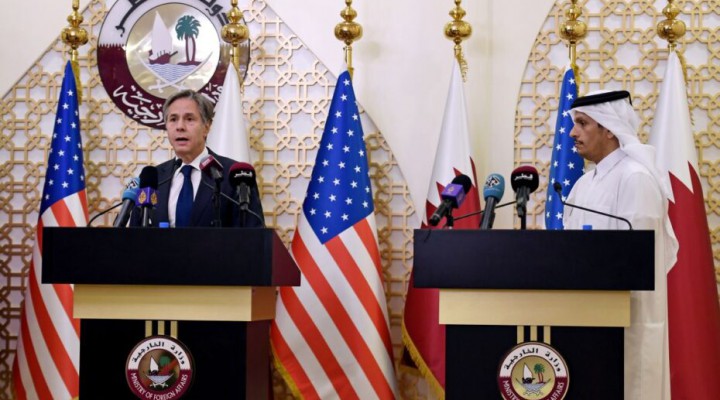 Washington’s whirlwind outreach is evidently an effort to shore up confidence among U.S. allies in American defense commitments.

United States Secretary of State Antony Blinken is visiting the Middle East and Europe this week in an effort to repair the damage to Washington’s standing with its allies following the disastrous retreat from Afghanistan.

The top U.S. diplomat first goes to Qatar, the Persian Gulf state which has served as a forward – and now backward – operating base for the Pentagon during its military occupation of Afghanistan. Blinken then travels to the giant U.S. airbase at Ramstein, Germany, which was also a vital logistics hub for prosecuting America’s “longest war” – a war that ended in spectacular failure last month. There he will meet German Foreign Minister Heiko Maas ahead of a virtual conference with other European officials on the challenges posed by postwar Afghanistan.

Blinken’s itinerary will overlap with that of the U.S. Secretary of Defense Lloyd Austin who is also visiting Qatar and the other Gulf states, Saudi Arabia, Kuwait and Bahrain.

Washington’s whirlwind outreach is evidently an effort to shore up confidence among U.S. allies in American defense commitments. The dramatic and hasty pullout from Afghanistan by the Biden administration has left allies wondering if their American patron can be trusted when the chips are down.

The sense of disappointment has perhaps been most keenly felt in Europe. A conference last week in Slovenia of European defense ministers expressed the anger and dismay of the “fiasco” caused by the U.S. withdrawal from Afghanistan. European allies were not even consulted by the Biden administration about the evacuation plan that concluded on August 31. European partners were left scrambling to get their remaining diplomats and troops out of Kabul because of Washington’s unilateral decision-making. Appeals to President Biden for a delay in the evacuation were pointedly ignored.

Attending the conference in Slovenia last week was the European Union’s foreign policy chief Josep Borrell. There were bitter recrimininations among the EU members towards the United States for being left in the lurch and appearing to be impotent.

Borrell said: “Afghanistan has shown that the deficiency in our strategic autonomy [from the United States] comes with a price.”

Put in plainer language, Borrell was admitting that the EU’s subservience to the U.S. makes it look foolish and helpless.

In reaction to the Afghanistan debacle, there are now renewed calls for an independent European military force to carry out overseas missions separately from Washington. A European army has long been advocated by the EU’s big members Germany and France. However, certain inertia in the proposal stems from sensitivity to criticism of such a force being a throwback to European imperialism. Germany in particular with its Nazi past has to tread gingerly on the subject.

However, the scale of disgrace over defeat in Afghanistan for the U.S. and its NATO allies is so poignant that the debate on European “autonomy” is being propelled forward.

The problem for Europe is two-fold. The deployment of a proposed rapid reaction force for dealing with an overseas crisis is contradicted by Brussels’ bureaucracy and the principle of unanimity among the EU’s 27 member states. How can a force be a “rapid reaction” one when its deployment must require the inevitable comprehensive debate beforehand? That problem is being addressed by moves to form “coalitions of the willing” for deployment. So, for example, if Berlin and Paris deem a joint military expedition necessary to some conflict zone, then that would be sufficient for its authorization. That still is politically tricky because it can be criticized for the perceived hijacking of the EU bloc by a minority of, albeit powerful, members. That again smacks of the EU being forged into a Neo-imperialist vehicle.

A second problem is European military autonomy from Washington could undermine the NATO alliance. This was explicitly stated by the Norwegian civilian head of NATO, Jens Stoltenberg, following the proposals touted at the conference in Slovenia. Stoltenberg warned that moves for European military actions independent of Washington would not be viable. He said that NATO was the only way to defend Europe and that any shift from the transatlantic alliance would split Europe.

Of course, Stoltenberg would say that. His lucrative job depends on promoting NATO.

Nevertheless, there is an emerging division in Europe. There are those voices in Germany, France, Spain and Italy who would like to see more independence from Washington in decision-making. This position is bolstered by the Afghanistan travesty and the shame felt by European leaders with their pretensions of global importance.

On the other hand, the eastern members of the EU, Poland and the Baltic states, Estonia, Lithuania and Latvia, are more predisposed to NATO as the primary military force. This is because of their desire to keep Washington close owing to their irrational Russophobia.

In any case, what the fallout from Afghanistan shows is that the transatlantic alliance between the U.S. and Europe and its Middle Eastern allies is badly shaken due to Washington’s impetuousness to act in its own interests. The irony is that Joe Biden was supposed to restore relations between the United States and its allies which had been ruffled under Donald Trump and his boorish “America First” braggadocio.

Now Biden’s top aides are left with the task of calming allies who have been spooked by Washington’s new iteration of what has always been a constant, never-changing policy of America First. The really damaging thing though, which may have become irreparable, is that Biden’s trust-building among allies is now seen for what it is: a cynical pile of lies.

0 thoughts on “Blinken on Damage-Limitation Tour After Afghanistan Fiasco”