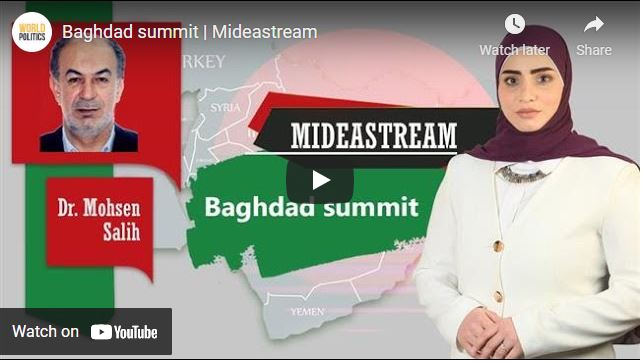 Iraq hosted a regional summit on Saturday supposedly aimed at easing tensions in the Middle East while emphasizing the Arab country’s new role as a mediator. Heads of state attending included Egyptian President Abdel Fattah al-Sisi, King Abdullah II of Jordan, Qatari Emir Sheikh Tamim bin Hamad Al Thani and French President Emmanuel Macron. Iran, Turkey and Saudi Arabia sent their foreign ministers while Kuwait and the United Arab Emirates sent their heads of government. The summit was held against the impact of the re-emergence of Daesh, which was defeated in Iraq in 2017 and in Syria in 2018, at the hands of the Iraqi resistance with direct support from martyr Lt. Gen. Qassem Soleimani, while the major transformational events in Afghanistan are center stage.

To discuss this issue with us from Berut is Dr. Mohsen Salih, political commentator and Academic.

At a time when the Afghan factor today represents a number of serious challenges that the neighboring Central and West Asian countries will have to face at the local and regional levels, first and foremost, security issues, there are files and crises that have come to the fore in the past few weeks and days. Having watched the US fail to evacuate wartime allies in Afghanistan and the chaos which ensued as a result, Iraq found Baghdad Summit a way to share its worries that a similar fate might await them. It has always been evident that Americans abandoned their assets and that they never keep their promise, yet as Daesh is preparing to re-emerge while the US is completely shaking off all responsibility of the dire situation in Iraq, the Baghdad Summit comes at a time when tension is high in a volatile west Asia.