HOME / WORLD / Iran to Assad: Don’t worry about the “Caesar Act” when you have Israel on your borders 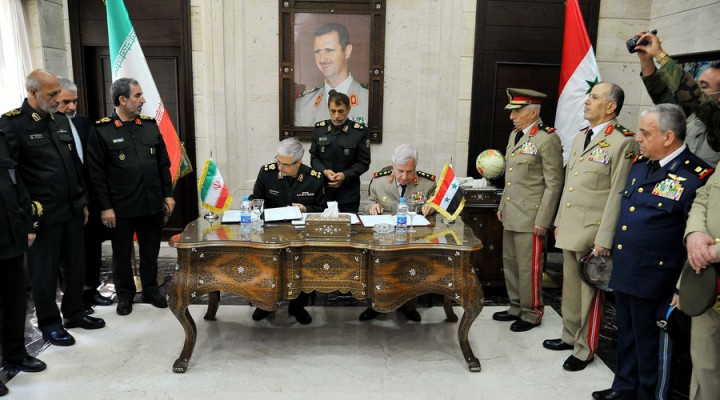 An Iranian military delegation led by Chief of Staff Major General Mohammad Bagheri met in Syria with President Bashar al-Assad and his Defence Minister Major General Ali Ayyoub to strengthen and enhance military, defensive and security cooperation between the two countries and improve Syria’s missile and defensive competences. However, the visit of high-ranking Iranian officers carries several messages in all directions, to friends, foes, allies and to the international community, inaugurating a new era in which Syria will play a more important role in the Middle East.

It is not new for Iran to deliver surface-to-air and precision surface-to-surface missiles to Syria. Iranian missiles have been distributed to various locations in Syria, and surface-to-air missiles have reached the Tiyas air base, known as T4, in Homs. Israel managed to destroy many of these missiles, even before deployment in its hundreds of attacks on Syria throughout the nine years of war.

What is new from this visit are the many messages sent to all parties concerned: First, the signing of the military agreement is a direct message to Israel that Syria is now

Thirdly, President Assad is telling Israel that its claim to have forced Iran out of Syria is false. The Iranian IRGC officers are in Syria to stay; indeed, the relationship is robust enough to confute the wishful thinking of Israeli analysts.

Iran told President Assad that the “Caesar’s Law” is “far from being a real worry for Syria when it has a jewel on its border, Israel. The presence of the Israelis on your borders allows you to do whatever you want and to impose anything you want.” Iran means that Israel is dependent on the EU-US. Therefore, no sanctions could survive for long if Syria seriously were to threaten Israel with strikes by precision missiles at the next violation of Syrian sovereignty. The presence of Israel therefore can be seen no longer as a curse but as a blessing; the Israeli threat can be transformed into an opportunity to put pressure on the international community.

The Syrian-Iranian meeting was indeed strategic, sending messages in many significant directions. The US starvation strategy imposed on Iran, Syria and Lebanon, the main components of the “Axis of the Resistance”, is helping the population to align with the “Axis of the Resistance” more than ever. All this could not happen without the mistakes of the US administration, its blind support for Israel and the bullying of its partners. This is the dawn of a new, more dynamic Middle East, where – even as part of the US “soft war” – the targets of sanctions become stronger and where the victims now impose their own terms.

0 thoughts on “Iran to Assad: Don’t worry about the “Caesar Act” when you have Israel on your borders”