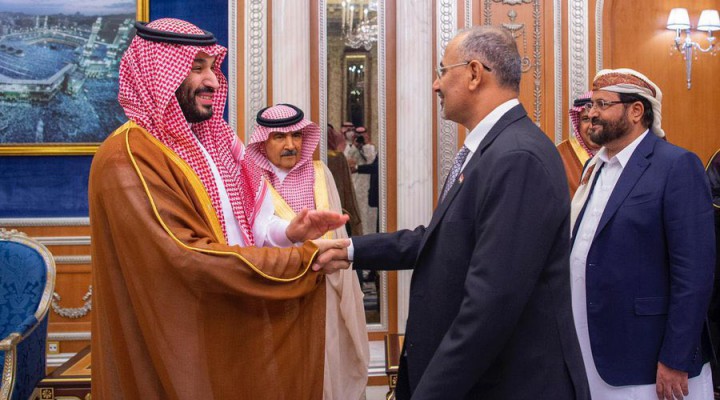 The Presidential Leadership Council appointed by Yemen’s discarded president-in-exile Abed-Rabbo Mansour Hadi on Thursday is significant, and dangerous, for three reasons: It unites most of the country’s major anti-Houthi forces in a single front. It takes over the mantle of ‘legitimacy’. And its prospects are bolstered by a promise of £3bn in aid from its patrons, Saudi Arabia and the UAE.

Saudi Crown Prince Muhammad Bin-Salman surprised everyone with this ‘clever’ move that relieves him of the burden of Hadi and his strongman vice-president, Gen. Ali Mohsen al-Ahmar. But this Council faces two big challenges: To remain intact and for its members to continue holding together and set aside their ambitions for power. And more importantly, for the Houthi Ansarullah movement and its government in Sanaa to recognise and agree to negotiate with it.

The Council, whose Saudi and Emirati sponsors chose Rashad al-Alimi as its ‘consensus’ chairman, consists of eight members. Four are from the north and four from the south. Their common denominator is that they all have military or security backgrounds and records of opposing the Houthis. They are a political, geographic, and tribal mixture of southern separatists, Islamists, tribalists, secularists, clan chiefs, and militia leaders. The one thing that binds them together is their hostility to Ansarullah and adamant refusal to coexist with it let alone defer to its leadership as the most powerful force on the ground, as yet.

Hadi’s ‘last stand’ in front of the TV cameras — when he announced his own dismissal, the formation of the new Council, and the “irreversible” delegation of all his powers to it — resembled the experience of former Lebanese prime minister Saad al-Hariri when he was humiliatingly forced to announce his resignation while under house arrest in Riyadh. He would have remained in that condition to this day, like many former Ritz Carlton inmates including senior princes, were it not for the intercession of French President Emmanuel Macron.

The new Council’s ‘legitimacy’ actually depends on the recognition of the Yemeni people, or a majority of them, and the agreement of the Houthis to negotiate with it about a political power-sharing agreement that could lead to a permanent halt to the fighting and an end to the war. It is difficult to assess what the people think in the absence of elections or opinion polls under current circumstances. But it’s easier to gauge the stance of the Houthis and their allies. They have yet to issue any formal statement about the matter at this writing. But the early signs don’t look positive.

Ansarullah political bureau member and designated media contact Muhammad al-Bakhiti made no secret of his surprise at the formation of the Council. But he seemed dismissive of any prospect of dialogue with it. Negotiations “should be between Yemen and the aggressor states… not their clients,” he said.

He was also fiercely critical of Alimi, the new council’s chairman, describing him as “America’s man.” He said that during the National Dialogue talks, Alimi adamantly rejected a draft text that stipulated there should be no US bases on Yemeni territory. “Real legitimacy belongs to those who defend the country’s independence,” he said. “This Presidential Council is not legitimate because it is an extension of the occupation.”

Muhammad Bin Salman may have got rid of Hadi in this ‘soft coup’ because he thought he was an obstacle to uniting the anti-Houthi front. But he could now have given himself a whole load of Hadis to contend with in the eight members of the new council. What divides them is far greater than what unites them. And don’t forget that the politicians ousted and excluded from the Council, including Hadi and his deputy, have supporters and tribes on the ground that could turn into spoilers. Hadi’s reference to the Houthis as ‘brothers’ may be a pointer in this regard.

This Council was most likely created to fight the Houthis more effectively rather than make peace with them as declared — if previous ‘unification’ efforts and their outcomes are any gauge — unless a miracle happens and it accepts Abdelmalek al-Houthi or his nominee as Yemen’s president.

After seven years of war and 377,00 Yemeni deaths, the conflict in Yemen is no longer confined to being between Yemenis. It has turned into a struggle for power rather than one over power-sharing. Anyone who disputes that doesn’t know Yemen, and doesn’t know Saudi Arabia.

Only those who wield power on the ground can take decisive decisions, and we’re not living in the age of miracles. I wish I were wrong. Time will tell.