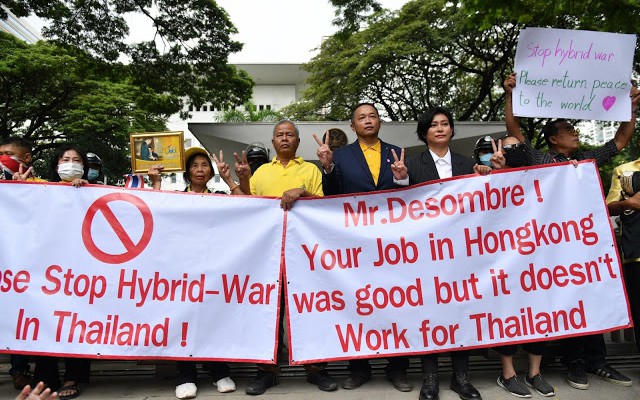 Pro-Thailand groups came out in large numbers today to counter weeks of destabilizing anti-government protesters organized by the billionaire-led Thai opposition and funded by the US government.

One group protested US meddling in front of the US Embassy in downtown Bangkok with signs reading “please stop hybrid war in Thailand” and “Mr. Desombre! Your job in Hong Kong was good, but it won’t work in Thailand.”

“Mr. DeSombre” refers to the current US ambassador to Thailand, Michael DeSombre, who was previously in Hong Kong amid US-funded unrest there. 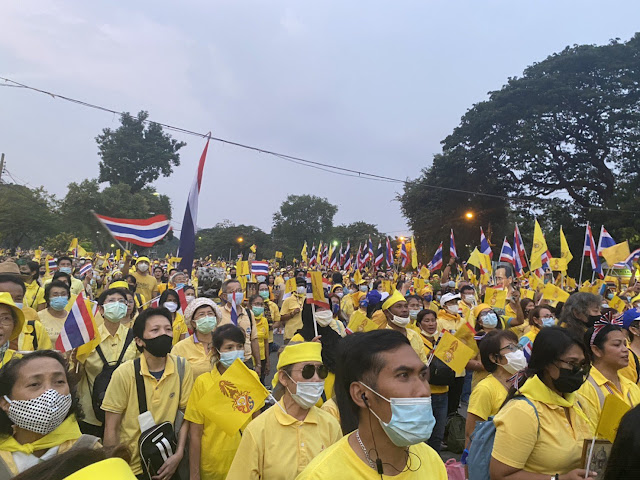 Later in the day over 1,000 pro-Thailand demonstrators converged in a public park with similar messages denouncing US meddling and the opposition groups abetting US interference.

They also came out in defense of Thailand’s constitutional monarchy – a 700+ year old institution that has unified and defended Thailand for centuries leaving it the only nation in Southeast Asia to avoid Western colonization.

China is also a key partner in several major infrastructure projects including Thailand’s rollout of 5G technology and the construction of a high-speed railway that will connect Thailand to China via Laos.

Thailand’s military and constitutional monarchy – along with the government and large Thai business interests have clearly pivoted Thailand toward China.

Washington’s current efforts to undermine and destroy the Thai monarchy are clearly aimed at dividing the Thai public and destabilizing the country – thus rolling back growing Thai-Chinese relations.

US and its Paid Agitators Continue to Deny Documented Meddling

The Western media and its Thai partners immediately denied that ongoing anti-government protests are being funded and engineered by the United States.

This is despite US government funding being extensively documented and the Thai opposition itself openly joining the “Milk Tea Alliance” alongside confirmed US-funded opposition groups in Hong Kong and Taiwan.

US government funding of core organizations behind ongoing anti-government unrest in Thailand is also openly listed on the US National Endowment for Democracy’s (NED) official website – the link to which is now widely circulating online in Thailand. 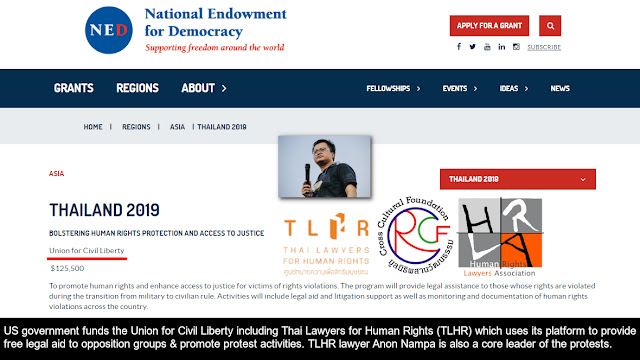 Increasing awareness of US interference is now raising questions as to why media groups like Khaosod, Matichon, and the BBC Thai as well as opposition figures like Anon Nampa and Francis Bunkueanun Paothong have repeatedly lied about it – denying any US government funding. 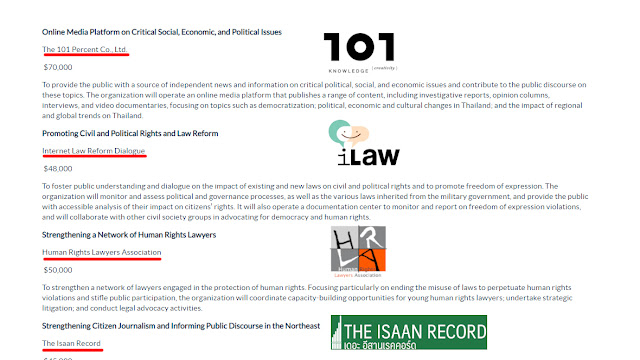 The US Embassy in Bangkok has also now twice denied funding opposition groups involved in anti-government protests despite it being listed on the US NED’s own website. 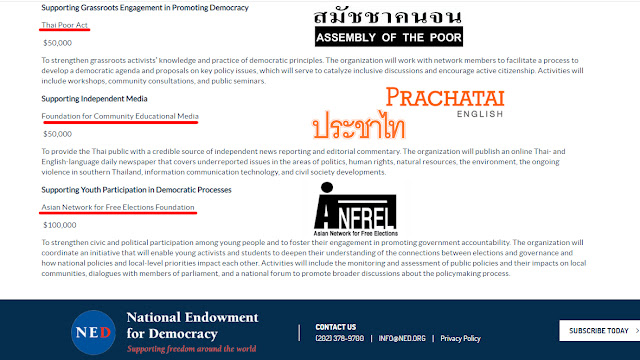 Virtually every aspect of ongoing anti-government protests in Thailand are being funded by the US government via NED – from core leaders like Anon Nampa and his “Thai Lawyers for Human Rights” (TLHR), to opposition media like Prachatai and Isaan Record, to legal groups like Internet Law Reform Dialogue (iLaw) which is attempting to petition for Thailand’s entire constitution to be rewritten.

Each organization is listed on the US NED website including the amounts admittedly given to each group by the US government. Beyond any denial – the opposition and its backers across the Western media have used their near monopoly over information to simply bury these facts and silence those attempting to expose them.

Now, it seems critical mass has nearly been reached where US meddling is being drawn out into the open and those who have lied about receiving US funding – including those in the media who helped repeat and protect this lie – may face serious consequences as was the case in Hong Kong, China.

The next predictable line of defense for US-funded agitators will be to claim that the US NED is not part of the US government – or that the US government is merely helping “promote democracy” in Thailand. Of course a look at the US NED’s board of directors reveals the organization to be led by an all-star lineup of regime change architects, warmongers, and war criminals including many who played a direct role in the illegal invasion of Iraq in 2003, the US war in Libya and Syria, the overthrow of the Ukrainian government in 2014, and more recently the Hong Kong riots.
Of all the places the US has “promoted democracy” in – not one example exists of even a single nation spared division, war, and economic ruination as the final outcome of US “help.”
Just as was the case in Hong Kong – the US will deny and defend its meddling in Thailand until enough awareness is raised  both within Thailand and across the alternative media worldwide – including through state media in nations like Russia, China, and their many allies – as well as across the independent alternative media.
When this happens – anti-government protesters will have to face a choice of either continuing forward as exposed agitators engaged in sedition and treason facing the full weight of the consequences for doing so, or abandoning an ill-conceived movement which followed dishonest leaders who deliberately hid their foreign funding and agenda from their many followers for years.
https://landdestroyer.blogspot.com/2020/10/thai-patriots-expose-us-funding-behind.html
Tags: protestThailandUSA