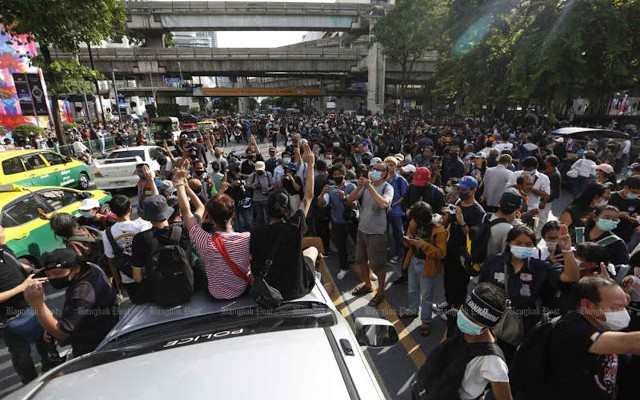 The Western media collectively took last night’s rally as “evidence” that the Thai government’s crackdown on US-funded agitators “failed.” In a bid to egg on future protests – concerted efforts across the Western media and with their Thai partners were made to inflate the size of the protest – claiming “tens of thousands” attended.

Police estimates are based on this methodology and put the protest number at 10,000 at its peak. Western media outlets like the BBC and Reuters who dishonestly claimed “tens of thousands” attended never revealed their methodology – because they were simply spreading disinformation.

To put the protest numbers into perspective – the elevated train line that passes the major intersection protesters blocked moves nearly 800,000 people a day – mostly during rush hour. Bangkok and its surrounding areas is home to over 12 million people.

The fact that only 10,000 showed up at a protest that spanned several hours further illustrates just how unpopular the opposition is despite months of rallying and heavy promotion across opposition and foreign-funded media. The largest protest this year – held in September and featuring large numbers of bused in “red shirts” from billionaire fugitive Thaksin Shinawatra’s political machine – reached only 20,000.

Red shirt rallies in the past would regularly reach 30,000 to even 50,000 on peak days. Protests against Thaksin Shinawatra and his political machine in 2014 would reach nearly a million people on peak days and featured multiple major protest sites across all of Bangkok.

Emergency Decree Was Meant to Better Deal With Leaders/Sponsors, Not “Instantly Stop” Protests

It would be unrealistic to believe a foreign-funded mob organized by Thailand’s corrupt billionaire-led opposition which regularly broke laws at each and every rally until now – was going to simply “not protest” because of yesterday’s emergency decree. And no one involved in announcing the decree believed it would instantly stop protests.

Instead – the emergency degree allows the government to now arrest protest leaders and even those funding and supporting the protests including propagandists posing a journalists – without citing specific violations of existing laws regarding specific crimes – and simply for participating in, aiding, and abetting unrest.

Just as China slowly and patiently worked US-funded agitators in Hong Kong into a corner, eventually either arresting or exiling the entire movement’s leadership as well as their sponsors and media organizations supporting them – drawing out the most dedicated and/or violent members over the course of several months – permanently ending the protests – Thailand is also now in the process of slowly encircling and draining the likewise US-funded movement targeting Thailand’s political and economic stability.

It is a process the Thai government has used in the past to severely diminish the power and influence of Thailand’s billionaire-led opposition – whose defacto leader Thaksin Shinawatra – already lives in permanent exile overseas.

Yesterday – US-funded agitator Joshua Wong, a leader of Hong Kong’s failed protests – encouraged US-funded agitators in Thailand. The Western media praising his comments and advice were apparently unaware or disinterested in the fact that the strategy US planners had him follow led Hong Kong protesters into jail cells or exile.

Time is on the current government’s side. The poor turnouts at these rallies including last night’s where less than 10,000 occupied Rajprasong intersection will only further expose the movement’s unpopularity. Blocking major intersections at rush hour on a daily basis and forcing closed local businesses already struggling because of the global COVID-19 economic crisis will push even apathetic Thais into supporting government efforts to end the protests permanently.

For the US and other Western interests behind these protests – aimed at undermining Thailand, rolling back its ties with China, and hindering Asia’s rise above a waning Western-led international order – time is running out – prompting increasingly desperate tactics.

Thailand must remain vigilant against the use of violence by protesters, provocateurs, as well as false flag violence carried out to implicate Thai security forces. Thailand must also prepare itself and its economy for additional pressure from the West in the form of sanctions and influence operations aimed at hurting the nation.