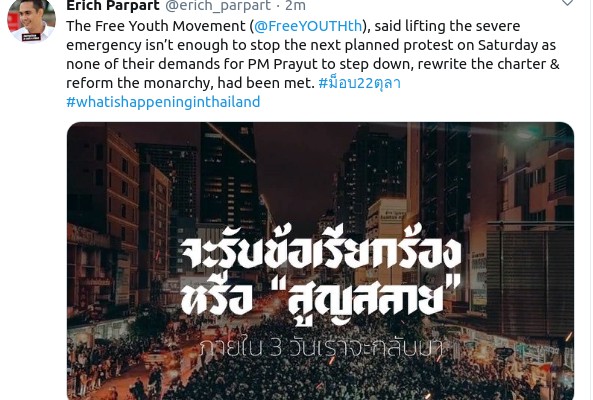 Another illustration of the true agenda behind anti-government protesters organized by Thailand’s billionaire-led opposition and funded by the US government – emerged when the Thai government met one of the protesters’ demands today by lifting the current emergency decree – only to be met by condemnation and complaining by the opposition.

In fact, directly after the Thai government’s overtures to “step back” last night from the growing conflict – protesters violently attacked police and attempted to storm Thailand’s Government House.

What seems like an unimaginable reaction by the opposition to actually complain about the government meeting one of their demands – demonstrates the uncompromising nature of their agenda which is to remove the Thai government, replace Thailand’s system of government, rewrite the Thai constitution, and erase the nation’s institutions, history, and culture in exchange for those sponsored by and serving Western special interests.

The Thai government’s move may have been to precisely demonstrate the irrational, uncompromising nature of the mobs, both to the Thai public and the international community – and while it would serve a genuine opposition best to compromise – for a foreign-funded opposition aimed at rolling back Thailand’s ties with China and thus its economic prosperity and stability – there can be no compromise.

Likewise US-funded movements around the globe pursued policies and agendas that have led multiple nations into political, social, and economic ruin. Libya, Ukraine, and to a certain extent – Hong Kong – have all suffered either complete collapse, partial collapse, or in Hong Kong’s case – now face a long road to recovery but only after China successfully uprooted Washington’s proxies.

Thailand must carefully consider these previous examples and understand the danger the country now faces in the form of an irrational, uncompromising opposition not interested in moving Thailand forward – but setting it back as far as possible to spite Thailand’s non-aligned allies and partners – especially China.