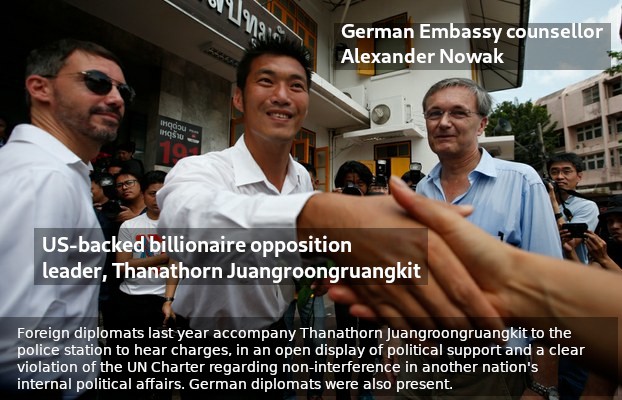 Germany has aided the US in wars and meddling around the globe and is now taking a leading role in interfering in Thailand’s internal affairs on behalf of Washington.

Just as Germany has followed the US in serial violations of international law and aided in multiple crimes against humanity – including aiding the US occupation of Afghanistan and America’s current illegal occupation of Syria – Germany is also aiding US-funded opposition groups in Thailand.

When anti-government protesters vowed to rally at the German embassy in Bangkok, the embassy should have declined to get involved in Thailand’s internal political affairs – an obligation all nations including Germany must fulfill under the United Nations Charter.

Instead, the German embassy demanded the Thai government protect anti-government protesters and vowed to receive any statement handed to them by protest leaders.

This latest staged event organized between the protesters and their foreign sponsors comes after Germany’s parliament – led by Green Party politicians – attacked Thailand’s head of state, King Maha Vajiralongkorn – accusing him of undermining Germany’s sovereignty by addressing issues of Thai politics while in Germany.

Of course – addressing issues of Thai politics while traveling in another nation is not a violation of that nation’s sovereignty.

On the other hand – the German government through the Heinrich Böll Foundation funding several core Thai opposition organizations alongside the US government is absolutely a violation of Thailand’s sovereignty as well as the UN Charter.

The Heinrich Böll Foundation is listed on Internet Law Reform Dialogue’s (iLaw) official website as a donor alongside the US government’s National Endowment for Democracy (NED). 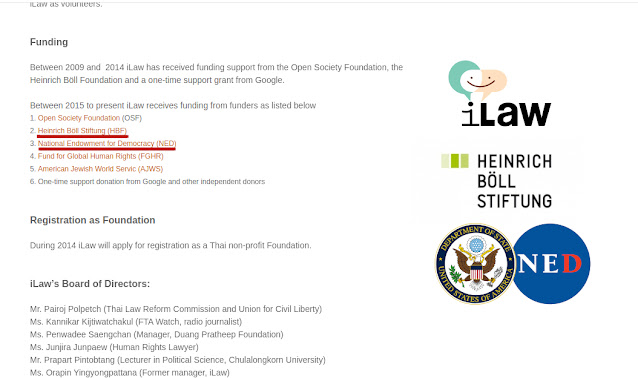 Prachatai – as disclosed on their own official website – is also funded by both the German government’s Heinrich Böll Foundation and the US NED. 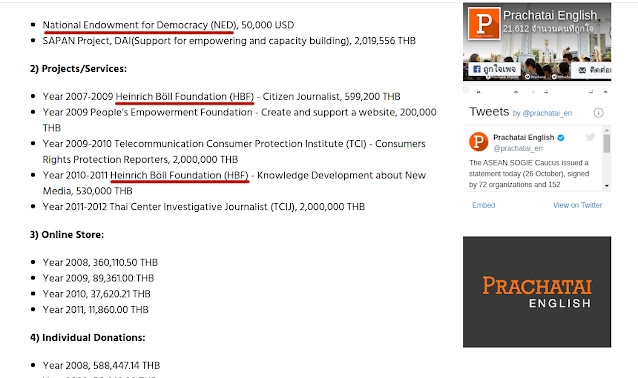 Both Prachatai and iLaw form part of the core around which anti-government protests in Thailand have formed.

Efforts to rewrite Thailand’s entire constitution are being led by iLaw – an organization who receives all of its funding from foreign governments – including the US and Germany.

After helping the US fund and and build up an anti-government movement in Thailand – the German Embassy is playing a key role in both protecting the leaders of the movement as well as using the German embassy in Bangkok, Thailand as focal point for protesters to rally around, deliver statements to, and receive open public support from.

In 2019, German diplomats were among many from Western embassies to rush to the aid of billionaire opposition leader Thanathorn Juangroongruangkit when he was summoned by police to hear criminal charges against him.

Foreign Minister Don Pramudwinai has accused foreign envoys of breaching diplomatic protocol and intervening in the justice system by being present when Future Forward Party leader Thanathorn Juangroongruangkit reported to Pathumwan police on a sedition charge.

…diplomats from Australia, Belgium, Canada, Finland, France, Germany, the Netherlands, the UK and the US, as well as EU and UN human rights officials, went to the police station to observe the proceedings.

Thanathorn had before the 2019 general election – travelled to the United States to lobby for political support and vowed to make Thailand more like America. He also ran on an anti-China platform promising to cancel ongoing construction of the Thai-Chinese high-speed railway and replace it with  non-existent US “hyperloop” technology. He also sought – and still seeks – to slash Thailand’s military budget – already well below global averages versus national GDP – in order to end several key Thai-Chinese arms deals.

The US and Europe’s support for Thanathorn and their collective opposition to the current Thai government is driven by clear anti-Chinese motivations and a desire to hinder Asia’s economic rise.

Were it another country exhibiting this behavior inside Germany – Berlin would likely expel their diplomats and shutter their embassy. However, Germany – like the United States – conducts a foreign policy in contradiction to international law, norms, and respect for national sovereignty whenever and wherever its suits Berlin.

As Germany demands Thailand adhere to international law regarding ongoing unrest – Germany itself by inserting itself in Thailand’s internal political affairs stands in direct violation of the UN Charter and is – alongside the US, UK, France, and others – violating Thailand’s sovereignty.

Germany’s trade with Thailand is in single digit percentages falling over the years as China and other Asian nations replaced the West as Thailand’s main trade partners and investors.

0 thoughts on “Germany Aids US Meddling in Thailand”