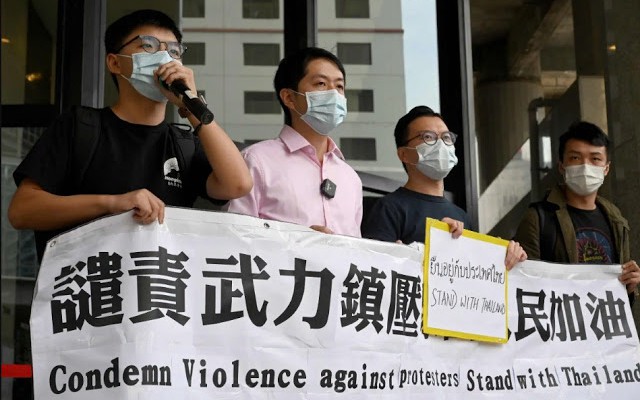 Bangkok Post in an article titled, “Hong Kong students pledge loyalty to Thai protesters,” helped shed any doubt over where the US-funded anti-Chinese movement stood in regards to likewise US-funded protests in Thailand – confirming once and for all the regional nature of US interference in Asia and its goal of undermining Beijing’s closest regional allies – including Thailand.

Hong Kong students have pledged support for the pro-democracy movement in Thailand after the recent wave of anti-government protests has rocked the capital for over a week.

It would also note (emphasis added):

Anti-government rallies are sparking an outcry abroad. On Monday, Hong Kong activists gathered at the Thai consulate in the city to show solidarity with their counterparts in Thailand. Joshua Wong, one of the leaders of Hong Kong’s pro-democracy movement, was among them. Others are following suit in the UK, US, France and Japan.

Angel Woo, a student at the Chinese University of Hong Kong (CUHK), said most Hong Kongers stand with their counterparts in the pro-democracy movement called the “Milk Tea Alliance”, an online bloc of Hong Kong, Taiwan and Thailand standing in defiance of China.

Why Thai protesters would be “standing in defiance of China” is never explained by the Bangkok Post.

Thailand at the moment has one of the most constructive relationships with China in the region and undermining this relationship including deep economic ties – especially amid the global COVID-19 economic crisis – would cause irreversible damage to the daily life of tens of millions of Thais.

China is Thailand’s largest trade partner, largest foreign investor, and the largest source of tourism – accounting for more tourists per year to Thailand than all Western nations combined.

China is also a key partner in major infrastructure projects including the rollout of 5G and the construction of a high-speed railway that will link Thailand to China via Laos.

The high-speed railway will make it possible for even more tourists to move between both countries as well as open a direct corridor for Thai goods – especially agricultural products – into China, replacing complex and inefficient land routes current used, or expensive air transportation. The completion of the railway will open up economic opportunities never before possible for millions of Thais, Chinese, and their counterparts in Laos.

It is clear from pressure the US has exerted even on its own European allies regarding the rest of the world’s growing ties with China that the current Thai government’s growing relationship with China would not go unnoticed or unpunished by Washington.

The growing unrest and deliberate attempts by US-funded groups to divide and destroy Thai society are an extreme form of the already violent and divisive unrest the US is now confirmed to have been behind in Hong Kong, China.

Characters like Joshua Wong – who had initially denied US-backing – would eventually travel to Washington DC multiple times culminating in appearances in front of the US Congress lobbying for aid and the passing of legislation aimed directly at backing his violent street mobs in Hong Kong.

The Bangkok Post notes – in regards to the ending of the Hong Kong protests – that (emphasis added):

Student Leung Pak-hei said the imposition of the law and its harsh punishments [a maximum sentence of life imprisonment] is forcing the protest movement to “go underground”. Some plan to leave their homeland, others adapt songs and slogans to put up their resistance.

And indeed – China has effectively and permanently ended protests in Hong Kong by fully uprooting the foreign networks that were behind it.

Likewise if Thailand is to effectively deal with protests in any meaningful way – it will have to deal with the foreign-funded networks behind the protests and face the root cause of the protests  – not the opposition’s desire to simply seize power – but the overarching US agenda of placing a destructive wedge between Thailand and its biggest economic partner – China.

Whether Thailand does this directly as China did with a bold security law that openly called out and uprooted US-funding and aid to agitators inside its borders – or takes a more indirect approach – it will be only by developing a strategy that actually focuses on the root cause of current unrest that the unrest itself can be truly addressed.

Thailand’s opposition has openly linked itself to a US-funded regional campaign aimed at China by using the so-called “Hong Kong model” and proudly counting itself among the US State Department’s “Milk Tea Alliance.” While the Thai opposition still attempts to deny documented support from the US government – it has openly appealed to the German embassy which is working alongside US meddling in Thailand – for political support.

It is time for nations suffering from US-funded unrest as Hong Kong did to adopt a suitable version of the “China model” in dealing with it and perhaps creating a regional plan of action to deal with Washington’s regional meddling.