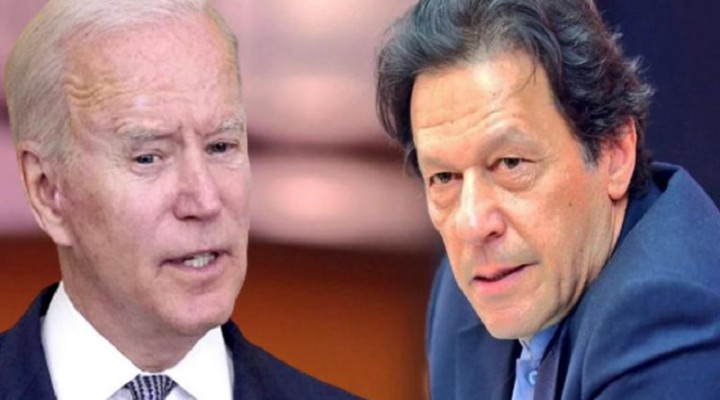 The deterioration of Pakistani-US ties wasn’t due to Prime Minister Imran Khan since this proud patriot has always practiced a policy of “Pakistan First” but is entirely attributable to the “American Exceptionalists” that are powerfully influencing the US’ “deep state” and who returned to power following President Joe Biden’s entrance into office. Being pro-Pakistani doesn’t equate to being anti-American unless someone already has an ideologically biased perspective and only interprets everything from the prism of the US’ unipolar hegemonic interests.

Pakistan and the US have been strategic partners for decades despite their relations going through some very dramatic ups and downs since the start of the 21st century. In theory, their ties should be mutually beneficial but they’ve often been mostly to the US’ strategic benefit at the expense of Pakistan’s objective national interests. For precisely that reason, incumbent Prime Minister Imran Khan has sought to restore balance to their relations since entering into office in 2018, but that’s prompted a very fierce pushback from those hegemonic “American Exceptionalists” in the US’ permanent military, intelligence, and diplomatic bureaucracies (“deep state”, which is equivalent in Pakistani parlance to “The Establishment”) that directly led to the rolling regime change crisis that he now finds himself in.

Comprehensively tracing the deterioration of Pakistani-US relations requires much more time, effort, and research than the scope of the present piece allows, which is why this analysis will only focus on concisely summarizing that sequence of events in order to place them in their contemporary context. The Pakistani leader has always been critical of America’s lopsided relationship with his country, though that wasn’t because he was ever “anti-American”, but purely pro-Pakistani. Those who equate his outlook with “anti-Americanism” are by default implying that those figures who are “pro-American” are therefore anti-Pakistani. Such, unfortunately, appears to be the case with those many journalists who are now gaslighting by pretending that the US has no problem with his independent policies.

Former US President Donald Trump was initially critical of Pakistan in the context of his country’s failed War on Afghanistan but quickly changed his tune upon meeting its Prime Minister in July 2019.  He told Mr. Khan that “I see great trade with Pakistan.  And I’m not — I’m not talking about a little bit more.  I’m talking about — we could go 10 and even 20 times what we’re doing right now.” This was in full accordance with Trump’s so-called “economic diplomacy” vision that Pakistan later applied to its own strategy and described as geo-economics in the first-ever National Security Policy that it published in January of this year. Although not formally stated, the US’ official “Strategy for Central Asia 2019-2025” from February 2020 very strongly implies close economic coordination with Pakistan.

One year later in February 2021, an agreement was reached to build a Pakistan-Afghanistan-Uzbekistan (PAKAFUZ) railway, which represents one of the world’s multipolar flagship projects. Even before that formal pact was clinched, the concept of de facto expanding the China-Pakistan Economic Corridor (CPEC) northwards (N-CPEC+) was widely discussed. From an American geo-economic perspective, PAKAFUZ could have seen US businesses ironically rely on state-of-the-art infrastructure built by their Chinese rivals in Pakistan to facilitate their robust engagement with post-war Afghanistan and Central Asia, all with an aim towards helping them balance their relationships with Russia and China. Alas, this mutually beneficial vision wasn’t to be.

A lot began to change in Pakistani-American relations from 2019 onwards. Prime Minister Khan started to more confidently articulate his informal “Pakistan First” vision, which to clarify once more, is not “anti-American” but only perceived that way from the perspective of those members of the US “deep state” who still ascribe to the discredited supremacist ideology of “American Exceptionalism” and the unipolar hegemonic innuendo that it entails. The Pakistani leader refused to allow the Pentagon to set up military bases in his country, instead proposing that they develop “economic bases” in line with the mutually beneficial PAKAFUZ/CPEC+ strategy that was explained in the preceding paragraph. He also condemned prior administrations for sacrificing their country’s interests for the US’ sake.

Incumbent US President Joe Biden’s victory following the 2020 elections resulted in the “American Exceptionalists” returning to predominant policymaking influence over that country’s “deep state” after having been somewhat pushed aside in favor of Trump’s geo-economic strategists who supported his business-driven vision of international diplomacy. The US’ humiliating evacuation from Afghanistan last August prompted the current administration to desperately search for a scapegoat. Pakistan predictably played the role, despite Islamabad’s full support for its international coalition partners throughout the course of this chaotic process as well as the aid that it gave to fleeing foreign civilians too, which contributed to Biden thus far refusing to even talk to Prime Minister Khan.

Amidst all of this, Pakistan continued to carry out a comprehensive rapprochement with Russia that was predicated on the mutually beneficial convergence of their respective Eurasian grand strategies. It isn’t, was not, nor ever will be aimed against any third parties such as America or India. Even so, the return of “American Exceptionalists” to power in the US’ “deep state” prompted that declining unipolar hegemon to view these developments through a zero-sum perspective and thus regard them as a threat to its self-interests as they interpreted them to be through their supremacist ideology. They were especially perturbed by Prime Minister Khan going through with his preplanned maiden visit to Moscow at the start of Russia’s ongoing special military operation in Ukraine despite heavy US pressure to postpone it.

Furthermore, these influential policymaking figures were enraged that the Pakistani leader condemned those nearly two dozen European Ambassadors in Islamabad who broke diplomatic protocol by publicly releasing a joint statement demanding that he denounce that Eurasian Great Power. The US-led West has zero tolerance for the principled neutrality that Pakistan has bravely practiced in the context of the Ukrainian Conflict even though a non-bloc policy is strictly stipulated in its recently promulgated National Security Policy. Put another way, America wanted Pakistan to voluntarily return to its prior vassal status after having finally just broken free from West’s post-colonial neo-imperial chains in order to once again sacrifice its own objective national interests for its former patron’s sake.

Observers also shouldn’t forget that Prime Minister Khan declined to participate in the US’ provocative “Summit for Democracy” in December, which was essentially meant to serve as a platform for America to reassert its declining unipolar hegemony over its vassals as part of a ploy to consolidate a so-called global “sphere of influence” in its New Cold War against Russia and China. The fast-moving events from that month up until the present day set the context within which the Pakistani leader just claimed that the US threatened to overthrow his government if he wasn’t successfully removed through the no-confidence vote that followed the day after that warning was informally conveyed. This suggests that some of those opposition members behind this regime change campaign are US intelligence assets.

To be absolutely clear, that doesn’t mean that every single critic of the Prime Minister (whether they’re a political figure or just a common citizen) is a so-called “American agent” but just that those who are actively advancing that declining unipolar hegemon’s strategic interests in Pakistan in the ultra-sensitive global context in which the no-confidence vote is taking place are at the very least functioning as that country’s “useful idiots”. This is particularly the case for those who are now shamelessly gaslighting in response to Prime Minister Khan’s revelation about that threatening letter by implying that the US never had any problem with his independent policies, supports him completing his term in office, doesn’t have nor ever had any influence over Pakistan, and wouldn’t ever carry out regime change anywhere.

Elements of the so-called “Establishment” are certainly conspiring with that foreign power, including some (but importantly not all) of those public figures connected with that shadowy faction in academia, civil society, and the media who’ve since become the face of this rolling regime change campaign, but it still remains unclear what’ll happen during Sunday’s no-confidence vote. Nevertheless, it’s crucial to clarify that Prime Minister Khan isn’t “anti-American” even now since he pragmatically understands the importance of retaining balanced relations with his country’s traditional strategic partner. All that he’s ever aspired to do was have America treat Pakistan as an equal like this proud country deserves but which hasn’t yet happened due to the “American Exceptionalists’” influence over the US’ “deep state”.

There’s nothing stopping the US from reversing course in the event that Prime Minister Khan wins Sunday’s no-confidence vote by having Biden publicly convey his congratulations and offering to build upon his predecessor’s ambitious proposal to scale up trade 10-20 times. That could realistically be done by prioritizing an updated free trade pact between these two, which is more important than ever for the US after its recently strained ties with India reduced the prospects of reaching an analogous one with that neighboring South Asian nation. Furthermore, there’s no reason why the US can’t participate in PAKAFUZ in pursuit of advancing its own geo-economic policy towards post-war Afghanistan and Central Asia. All of this is practical and can be accomplished so long as the US has the political will.

To wrap it all up, the deterioration of Pakistani-US ties wasn’t due to Prime Minister Khan since this proud patriot has always practiced a policy of “Pakistan First” but is entirely attributable to the “American Exceptionalists” that are powerfully influencing the US’ “deep state” and who returned to power following Biden’s entrance into office. Being pro-Pakistani doesn’t equate to being anti-American unless someone already has an ideologically biased perspective and only interprets everything from the prism of the US’ unipolar hegemonic interests. Every country has the right to diversify their foreign partnerships in mutually beneficial ways that don’t infringe on the objective interests of any third party, exactly as Pakistan has done with Russia, and it’s not the US’ place to pressure them whenever they do.

It was the US that ruined Pakistani-American relations and not Prime Minister Khan nor his country’s “Establishment”. The incumbent Pakistani leader has consistently sought to restore balance to bilateral ties in order to unleash their full mutually beneficial potential and thus bring more prosperity to his people according to his Islamic welfare state vision. It wasn’t he who turned away from America, but America that turned away from Pakistan by returning to its aggressively hegemonic ways as punishment for its formal vassal finally breaking free from its post-colonial neo-imperial chains under Prime Minister Khan. Only two outcomes are possible: the US pragmatically reverses its policy and finally respects Pakistan’s sovereignty or the regime change succeeds and Pakistan returns to being a US vassal state.