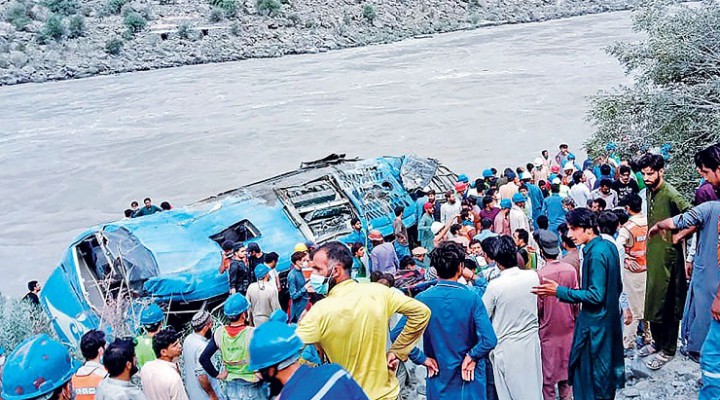 In April a terrorist bombing targeted a hotel in Pakistan’s southwest Baluchistan province hosting China’s ambassador to Pakistan, Nong Rong. Ambassador Nong Rong was not at the hotel at the time of the bombing, but the attack still ended up killing 4 and wounding several more.

In July an explosion targeted a bus carrying Chinese engineers working on the China-Pakistan Economic Corridor (CPEC), part of China’s wider Belt and Road Initiative (BRI). This attack killed 13 including 9 of the Chinese engineers.

Such attacks are not new. They are merely the most recent acts of violence amid a long-standing effort by the US and armed militants it has openly supported for years to thwart China’s partnership with Pakistan and to sabotage the BRI.

While US President Joe Biden had unveiled his “Build Back Better World” (B3W) initiative at the February 2021 G7 meeting as America’s answer to China’s BRI, it was clearly a smokescreen behind which the US would continue a campaign of global destabilization and militancy aimed at nations cooperating with Beijing and hosting various BRI projects.

Pakistan is among many nations now facing America’s true answer to the BRI – state-sponsored terrorism, militancy, and political subversion. Joining Pakistan is also Southeast Asian nations like Thailand and Myanmar which have both suffered from US-sponsored anti-government protests in recent years – the latter of the two having protests transform into now ongoing armed conflict.

The US has also targeted China internally, focusing its efforts on radicalizing Uyghur separatists in China’s western Xinjiang region, then undermining Beijing’s efforts to contain the resulting terrorism. Xinjiang serves, without coincidence, as a critical juncture for several BRI routes.

Much of Washington’s efforts to “free Baluchistan” have been copied and pasted from both US efforts to carve up the Middle East through granting the region’s Kurds defacto autonomous territory, or the US-backed push for a “free East Turkestan” in China’s Xinjiang region. This latter effort is reflected on the US National Endowment for Democracy’s (NED) own official website which lists its programs for Xinjiang, China as “Xinjiang/East Turkestan (China),” deliberately including the name given to the region by separatists.

Beyond mere speculation, the US has openly supported armed separatists in Pakistan’s southwest Baluchistan province for years. This includes entire hearings within the US Congress discussing US support for a “free Baluchistan,” publicly published op-eds written by US-based corporate-funded policy think tanks, and Congressional bills specifically calling for an independent Baluchistan.

As early as 2011, The National Interest would publish a piece by Selig Harrison, director of the Asia Program at the Center for International Policy, titled, “Free Baluchistan.”

In it, Harrison would argue (emphasis added):

While doing less elsewhere in Pakistan, the United States should do more to support anti-Islamist forces along the southern Arabian Sea coast. First, it should support anti-Islamist Sindhi leaders of the Sufi variant of Islam with their network of 124,000 shrines. Most important, it should aid the 6 million Baluch insurgents fighting for independence from Pakistan in the face of growing ISI repression. Pakistan has given China a base at Gwadar in the heart of Baluch territory. So an independent Baluchistan would serve U.S. strategic interests in addition to the immediate goal of countering Islamist forces.

In reality, “supporting anti-Islamist forces” was (and still is) the pretext the US uses to maintain involvement not only in Pakistan’s Baluchistan province, but also across North Africa and the Middle East. Often times the US is actually both sponsoring these extremist forces, while also posing as in support of those fighting them.

The real reason the US was and is interested in Baluchistan was stated in Harrison’s very last sentence, alluding to the fact that an independent Baluchistan would complicate or even entirely expel Chinese interests from the region.

Baluchistan’s Gwadar Port is a crucial checkpoint along China’s BRI. It serves as the terminal destination of the China-Pakistan Economic Corridor and allows China to ship energy and goods from China to the Arabian Sea, bypassing all of Southeast Asia for shipping to and from the Middle East, Africa, and beyond.

In 2012, the US House of Representatives’ Subcommittee on Oversight and Investigations of the Committee on Foreign Affairs would focus specifically on supporting an “independent Baluchistan.”

It would include a prepared statement from retired US Army Lt. Colonel Ralph Peters who would claim:

Baluchistan is occupied territory. It never willingly acceded to Pakistan, does not now wish to be part of Pakistan. If a plebiscite or referendum were held tomorrow, it would vote to leave Pakistan, as would every province and territory west of the Indus River.

He would then denounce US-Pakistan cooperation and compare Pakistan to “pirates,” claiming:

Peters’ statement would reveal a US desire to carve off most, if not all of Pakistan’s territory west of the Indus River – which without coincidence is also where the entirety of the China-Pakistan Economic Corridor passes through. A successful bid for independence by US-backed separatists would effectively end CPEC indefinitely.

The establishment of Baluchistan as a US client regime would also mean both US-occupied Afghanistan and this bordering rump state would combine into a single US-controlled region in the heart of Central Asia with access to the sea, vastly enhancing Washington’s ability to project military power – both conventional and asymmetric – throughout the region.

Also in 2012, a US House of Representatives resolution titled unambiguously, “Expressing the sense of Congress that the people of Baluchistan, currently divided between Pakistan, Iran, and Afghanistan, have the right to self-determination and to their own sovereign country,” would be introduced. Even though it did not pass, it indicates the very open and ongoing support within certain circles of US power to promote an “independent Baluchistan.”

As the US has done with other ongoing separatist projects around the globe, it and its European allies cultivate a government in exile for the imagined nation of Baluchistan.

The favored leader of this imagined nation is the “Khan of Kalat,” Mir Suleman Dawood. In one event hosted by “Democracy Forum” at the UK House of Lords in 2017, Mir Suleman Dawood would claim China’s investments and development of Baluchistan would only heighten tensions.

One of the main complaints made by separatists in Baluchistan is perceived neglect by Islamabad. However, it is very clear that infrastructure development driven by CPEC would alleviate this, meaning opposition to CPEC is in actuality prolonging this neglect – even actively preventing it from being addressed.

During this talk in 2017 in London, it was even made clear that if CPEC projects continued toward completion, the prospect of an “independent Baluchistan” would only become more remote. While it was never stated directly why during the discussion, it is clear that a developed and more prosperous Baluchistan would undermine and overcome separatist extremism in precisely the same way development in China’s Tibet and Xinjiang regions did.

Realistic or Not, US Will Continue Supporting Militancy

While these circles of US and European power promote independence for Pakistan’s Baluchistan province, they also admit the separatist groups themselves are unlikely to achieve independence and would – if ever achieving it – likely devolve into a fractured failed state.

Ralph Peters himself was included in a 2012 Huffington Post article titled, “Serious Internal Issues Undermining Baloch Insurgency And Independence Movement,” where he depicted the independence movement in less than optimistic terms.

The article would note:

According to Peters, one of the most serious issues with the Baloch independence movement is “deeply troubling” infighting. In fact, he is emphatic in his condemnation of such bickering; going so far as to assert: “they are quickly becoming their own worst enemies.”

In his view, individual Baloch simply don’t understand that their personal feuding undermines the larger movement: “Certain Baloch fail to understand that their only hope in gaining independence is if they put their own egos and vanity aside and work together. This is the cold hard fact. They are already outgunned and outmanned. Pakistan will continue to to exploit their differences until they realize this.”

So long as the Baloch continue to engage in “petty infighting,” including “savaging each other in emails,” Peters is pessimistic they can garner widespread support in the West. In fact, he warns that such infighting could eventually put off even their staunchest supporters.

Ultimately, however, whether or not the US can achieve their primary objective of carving off Pakistani territory and outright stopping CPEC, the US will continue supporting militancy in Baluchistan and elsewhere west of the Indus River.

Just as we’ve seen this year with attacks targeting Chinese engineers working on CPEC or an assassination attempt on the Chinese ambassador to Pakistan himself – the militancy will still serve as a significant obstacle in both finishing CPEC and utilizing it to its maximum potential.

President Biden’s B3W proposal was, at face value, an empty proposition lacking even the most basic details – because just like a screen of smoke – it is not meant to do anything except obfuscate. In this case, B3W is obfuscating a campaign of state-sponsored terrorism used by the West as its actual answer to China’s BRI – using armed militants to block or destroy BRI projects rather than present to the world a compelling and constructive alternative to these projects.

What Does the Future Hold for CPEC?

China has demonstrated a significantly compelling solution to US-sponsored separatism in both Tibet and Xinjiang where Chinese security measures coupled with infrastructure projects, job programs, and other means of addressing the root causes of extremism effectively smothered the long-burning fires lit by Washington.

A similar plan for addressing security, poverty, and perceived neglect in Baluchistan would stand the best chance of succeeding there as well.

We can anticipate any security operation or economic program implemented by Pakistan with China’s help will be met by the West’s industrialized “human rights” complex and Western media campaigns to depict it in the same nefarious manner China’s efforts in Tibet and Xinjiang have been depicted – as “genocide.”

The foundations have already been laid, with US NED programs focused specifically on Baluchistan province for years to build up fronts posing as human rights monitoring groups apt at fabricating reports regarding Islamabad’s “abuses” in the region. This localized propaganda campaign could – just as it was in Xinjiang – be internationalized if and when the conditions are deemed right.

It will be a race between Beijing and Islamabad’s ability to develop Baluchistan faster than the US and its allies can undermine and destabilize it, but it is a race that has already clearly begun, and a race that is both dangerous and deadly.

The US “withdrawal” from Afghanistan means that covert operations can be run out of Afghanistan’s territory by US contractors or special operations forces with a better sense of plausible deniability. The UK has also recently vowed to use its special forces for “higher risk” tasks against “big state adversaries” – clearly meaning China (as well as Russia).

Whether or not US and British operators will be plucked by local security forces from covert activities in western Pakistan remains to be seen, but the long-standing support by the West of armed extremists in this region is well established – support that still benefits and fulfills Western foreign policy objectives – so support that will undoubtedly continue well into the foreseeable future.