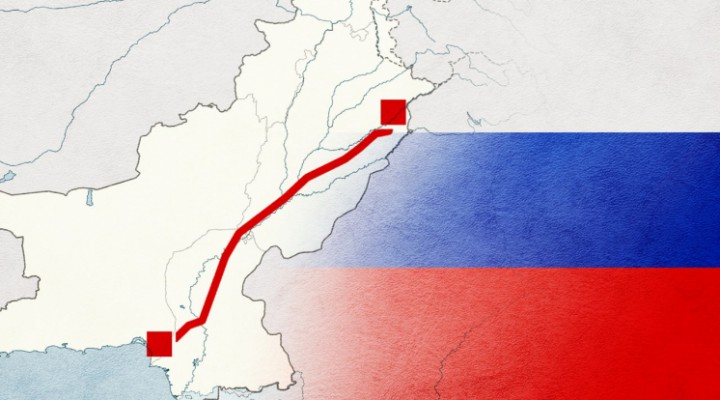 On January 17, Pakistani Prime Minister Imran Khan wrote on his Twitter account that he had a telephone conversation with Russian President Vladimir Putin and expressed thanks to him for his “resolute statement that freedom of speech cannot be a pretext for insulting our Prophet.” [i]

The Prime Minister noted that “President Putin is the first Western leader who has shown sympathy and sensitivity to the sentiments of the Muslim world”. In addition, he stressed that “Pakistan’s bilateral relations with Russia are developing on an upward trajectory, paying increased attention to trade and economic ties and cooperation in the field of energy.

He confirmed the government’s determination to implement the Pakistan Stream gas pipeline project as soon as possible. The two leaders agreed to strengthen bilateral cooperation in various fields, expand high-level exchanges and maintain close contact on issues related to Afghanistan.

Imran Khan said he was looking forward to President Putin’s visit to Pakistan, as well as his own visit to Russia at an appropriate time. [ii]

More recently, Pakistan has been in the headlines of the media, mainly because of some negative events – terrorist attacks, tension on the Indian-Pakistani border, loyalty to the United States. There was practically no information about the internal policy of this country. And on the Russian side, only a small number of specialists showed active interest in Pakistan, which can be counted on the fingers of one hand.

But in recent years, Pakistan has significantly changed both the approaches to conducting internal affairs and the vectors of its foreign policy, which is associated with an understanding of the ongoing changes in the global political conjuncture. Being the largest partner of China, as well as Saudi Arabia and Turkey, Islamabad is trying to balance between regional powers, while taking into account the constant tension with India, which is connected to it by a common history, including several wars and the unresolved issue regarding Kashmir.

It’s the largest nuclear-armed power in South Asia, with a population of 200 million people, among whom the middle class is rapidly growing. The unique geographical location that connects the warm waters of the Indian Ocean with the Hindu Kush Mountains and the Afghan foothills gives the country advantages in linking the transport flows of China, Iran, India, Afghanistan and Central Asian countries.

Cultural history shows that there have always been intersections of various civilisations. The 21st century opens up new opportunities for Pakistan (and not only for it). And a lot now depends on the choice of partners and the political will of the leadership – whether Pakistan will become a powerful state or suffer from chronic instability and political accidents.

After the government of Imran Khan came to power in 2018, the Prime Minister immediately stated that he would not allow the United States to use their country in conflicts against other states. [iii]

Although relations with the West remain mostly normal, a course towards reorientation and a change of priorities is clearly noticeable (however, as among other US partners, for example, in the Middle East). The recent refusal to participate in the “Summit of Democracies”, which was held on December 9 and 10, 2021 in the format of an online conference is indicative in this regard.

Despite the invitation from the United States, the Ministry of Foreign Affairs of Pakistan expressed its general appreciation quite diplomatically, at the same time noting that “Pakistan is a large functional democracy with an independent judiciary, an active civil society and a free media. We remain deeply committed to the further development of democracy in the country, the fight against corruption, and the protection of the rights of all citizens”.

It should be noted that by Western standards, Pakistan is at a rather low level in the ranking of countries in the world on the democracy index (108 out of 167 according to the British Economist Intelligence Unit agency for 2020). But Pakistan shares Russia’s views that every country has the right to live according to its traditions and cultural and historical values.

In this regard, Pakistan has a rather unique justice system. At the local level, issues are resolved at a community meeting (for example, in the north-west of the country, where Pashtuns live, this is a jirga associated with the traditional code of conduct of Pashtunwali; in Balochistan and other regions there are similar traditions, often based on Sufi customs), there is also a secular justice system, but in parallel there is a Sharia Supreme Court.

The military continues to play a big role in the governance of the country. In addition to security and defence functions, many companies and even analytical centres in Pakistan were founded by former military personnel, and this continuity is quite palpable in public and political life.

It should be emphasised that there are still problems with the activities of banned organisations in the country. In addition to radical Islamist groups, the Pakistani Taliban is still active, many of whose leaders are in neighbouring Afghanistan. Therefore, it is important for Islamabad to have a direct connection with the new Afghan government and through it to prevent any provocations on the territory of Pakistan.

Since the Pakistani Taliban consists of ethnic Pashtuns, they have previously carried out terrorist attacks against other ethnic groups (in particular, against the Hazara Shiites living in Balochistan), representatives of the state and even Chinese workers. Meanwhile, Balochistan also has its own ethnic separatist group (there is a similar one in Iran, and earlier there was an active “Jundallah”, which was funded by the CIA).

Supporters of radical Sunni views also bring a lot of problems to the government. At the official level, the Jamiat Ulema-i-Islam (Assembly of Islamic Clergy) is an ultraconservative religious and theocratic party with a 100–year ideological history. The head of the party is Fazl-ur-Rehman, who is also considered as the leader of the Pakistani Democratic Movement, which sounds like an oxymoron.

Previously, the Jamiat Ulema-i-Islam party played a big role, but now it has lost its influence. In total, less than nine deputies from this party are represented in the National Assembly and provincial assemblies.

The blasphemy law is still problematic, because of the interpretation of which there have been many cases of arrest of representatives of other religions. Any careless statements of non-Muslims in relation to the Koran or the Prophet Muhammad are often interpreted in Pakistan as blasphemy, for which severe penalties are provided, up to the death penalty.

However, the current government is quite optimistic, as is evidenced by the national security strategy of Pakistan, which was released in mid-January 2022.

From geopolitics to geo-economics

The document says that “our geo-economically important location gives Pakistan the opportunity to offer itself as a melting pot of regional and global economic interests through initiatives as a connecting link. This remains a priority, and its success requires regional peace and stability, to which Pakistan remains fully committed”. [iv]

They also talk about the need for good-neighbourly relations (including India) and improving relations with traditional partners. The full version of the strategy remains classified. [v]

However, the part available to the public indicates the continuation of the course to strengthen regional ties. Since the project of the century in Pakistan is the China-Pakistan Economic Corridor, which represents the key Belt and Road initiative, then, in many ways, Pakistan relies on the infrastructure already created.

The deep-water port of Gwadar in the south of the country is already connected by rail and highway with the Heartland of Pakistan – Punjab, and from there branches are being built further north.

In 2021, an agreement was signed on the creation of the trans-Afghan transport corridor to Uzbekistan. In December 2021, the Islamabad-Tehran-Istanbul freight train was launched, which will increase trade between the three countries. In addition, Pakistan expects that they will be able to enter the European market through Turkey.

The agreements were signed during the visit of the Federal Minister of Education, Vocational Training and National Heritage Shafqat Mahmood to the Kingdom of Saudi Arabia, a spokesman for the Ministry of Foreign Affairs said.

And the Foreign Minister of Pakistan said in early December that he was ready to host the long-delayed summit of the South Asian Association for Regional Cooperation (SAARC) if the “artificial obstacles” in its way were removed. He said this during a meeting with the Secretary General of the group, Esala Weerakoon, who was on a visit to Islamabad.

Pakistan was supposed to host the summit in 2016, but India boycotted the SAARC leaders’ meeting and also persuaded some other member states to do the same. According to the SAARC charter, the summit cannot take place if any of the participating countries does not participate. Since then, India has consistently stayed away from the summit, delaying the meeting of the leaders of eight South Asian countries.

Pakistan is also seeking to enter directly into the ASEAN market in order to diversify its capabilities and potential. The Engage Africa strategy is also being actively implemented, both through trade and economic ties and in the field of military cooperation.

As for the Pakistani Stream gas pipeline mentioned by Imran Khan, a bilateral construction agreement was signed on May 28, 2021 in Moscow. On the Russian side, the document was signed by Russian Energy Minister Nikolay Shulginov, and on the Pakistani side by Ambassador Shafqat Ali Khan.

This agreement has been prepared since 2015 under the original name of the “North-South” gas pipeline and it has important geopolitical significance for both countries. But the problem was that Pakistan did not pay Russia the external debt that had accumulated since Soviet times. Therefore, bilateral trade and economic relations between the two countries were virtually frozen. Only after the payment of the debt in the amount of $93.4 million in February 2020 did the situation get off the ground. [vi]

Russia has a stake of 26%. In addition, the Russian side will have the right to have a decisive vote when choosing contractors, on design, engineering works, supplies and construction.

Although now the main segment of cooperation between the countries covers a limited food and raw materials sector, nevertheless, there is significant dynamics in economic relations between Russia and Pakistan.

Of course, for a while the scope of our cooperation is limited, but by progressively developing relationships where humanitarian, cultural and educational exchanges are needed (including people’s diplomacy and small business initiatives), we can form a strategic roadmap.

By the way, military cooperation between Russia and Pakistan is proceeding according to plan, joint military exercises are regularly held, in particular, the “Friendship” manoeuvres on the territory of both countries. [viii]

The development of a tourist cluster in Pakistan with Russian participation can also present a unique opportunity, both on the coast and along the well-trodden historical routes from Mohenjo Daro and the cultural capital of Lahore to the Swat Valley inhabited by the unique Kalash people and the K2 mountain peak.

And, of course, cooperation between Russia and Pakistan can further reduce Islamabad’s dependence on uncomfortable old ties with Western powers.

0 thoughts on “Pakistan: from linear geopolitics to multipolar geo-economics”