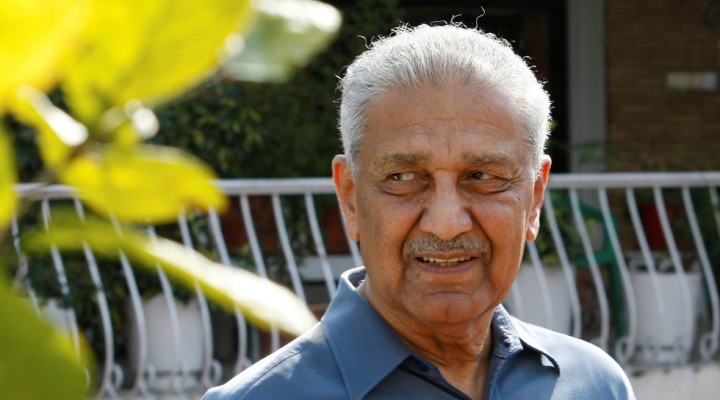 The death of Pakistan’s most infamous nuclear scientist has led to much reflection on his role in proliferating nuclear technology around the world. Little reflection is paid to the role of the CIA in allowing this to happen.

Abdul Qadeer Khan passed away aged 85 on October 10 from complications of Covid-19.

He was Pakistan’s best known nuclear scientist, whose success in acquiring sophisticated centrifuge technology used to enrich uranium has led many to anoint him with the sobriquet as the “Father of Pakistan’s Nuclear Bomb” (Khan had nothing to do with weapons design or manufacture; that honor goes to Munir Ahmad Khan.) But there is little debate over the critical role that he played in making Pakistan’s dream of possessing a nuclear deterrent a reality – without the uranium enrichment technology AQ Khan acquired through his efforts, the Pakistan nuclear weapons program could not have existed in its present form.

While taking nothing away from the skill and determination of Khan, the fact is that his efforts at technology acquisition, which focused on stealing blueprints and physical samples from URENCO, a European consortium based in the Netherlands which used centrifuges to enrich uranium for use in nuclear fuel. Khan worked at URENCO between 1972 and 1975.

In mid-1975, the Dutch security services began to suspect that Khan was a proliferation risk. The CIA, however, pressured the Dutch into not arresting Khan, but rather to continue to monitor him in hopes of gaining new intelligence about Pakistan’s nuclear ambitions. Khan and his family were able to elude Dutch/CIA surveillance and return to Pakistan in December 1975.

Armed with the limited intelligence that was acquired by monitoring Khan, the US government, at the time led by President Jimmy Carter, placed economic sanctions on Pakistan to pressure it into abandoning its plans for a nuclear weapon.

The Soviet invasion of Afghanistan in December 1979 changed this. According to Carter’s National Security Advisor, Zbigniew Brzezinski, the Soviet invasion prompted “a review of our policy toward Pakistan, more guarantees to it, more arms aid, and, alas, a decision that our security policy toward Pakistan cannot be dictated by our nonproliferation policy.” Carter lifted sanctions and provided Pakistan with $400 million in military aid.

Cold War realities prompted the US to turn a blind eye toward Pakistan’s efforts to build an atomic bomb. The importance of this move cannot be overstated; in 2009, Khan told Pakistani television that the Soviet invasion of Afghanistan “provided us with space to enhance our nuclear capability. Given the US and European pressure on our program, it is true that had the Afghan war not taken place at that time, we would not have been able to make the bomb as early as we did.”

Unencumbered by US sanctions and accompanying political pressure, Khan was able to assemble a massive smuggling operation which, by 1985, gave Pakistan the ability to produce highly enriched uranium (HEU) using stolen centrifuge technology. Enough HEU was produced by 1987 to build a nuclear bomb.

The enrichment capabilities that had been acquired by Khan consisted of a relatively primitive design, known as the P-1, and a more sophisticated derivative, known as the P-2. Once Pakistan’s centrifuge center was up and running, Khan was sitting on an excess inventory of P-1 centrifuges and spare parts for the P-2. Using his smuggling network, he reached out to Egypt, Saudi Arabia, Algeria, and Syria to sell them, as a package deal, the material and designs necessary to enrich weapons-grade uranium using centrifuges. These nations refused his offer, as did Iraq, in 1990. Iran, on the other hand, agreed to purchase centrifuge parts and designs for both P-1 and P-2 centrifuges, ostensibly for a peaceful nuclear energy program (Iran’s efforts to acquire similar technology on the open market had been rebuffed by the US and Europe.)

The CIA was able to find out about the Iranian purchases and in 2003 undertook an operation to infiltrate the Khan network to track any future sales. In this way, the CIA was able to control the purchase by Libya of centrifuges and other information related to nuclear weapons manufacture (including a bomb design). When the shipment was interdicted on instructions by the CIA, the subsequent fallout prompted Libya’s leader, Muammar Qaddafi, to terminate his efforts at acquiring nuclear and other weapons of mass destruction capability.

The Khan network was far more successful in its efforts to transfer its purloined centrifuge technology to North Korea in 1998, an act which put North Korea on the path of eventually mastering the enrichment of uranium for use in its own family of nuclear weapons. The CIA had recruited a source inside a North Korean delegation dispatched to Pakistan in June 1998 to witness the Pakistan nuclear tests and finalize procurement, but this source was exposed and killed in Pakistan by Pakistani security forces, according to reports. Blinded by this loss, the CIA sat back helplessly while Pakistani aircraft flew to North Korea with the centrifuges and designs that would be used to make North Korean nuclear bombs.

The success of Khan in acquiring sensitive centrifuge enrichment capability has been viewed as one of the greatest failures in the history of nuclear non-proliferation. Khan could have been stopped by the CIA but wasn’t. Instead, one bungled intelligence collection effort led to Pakistan and North Korea developing a nuclear weapons capability, and Iran developing an advanced uranium enrichment infrastructure which could be used to produce HEU usable in a nuclear weapon should Iran ever make that choice.

Around the world, nonproliferation experts mark the death of Khan by remembering his role in making Pakistan a nuclear power. Left unspoken is the role played by the CIA in proliferating nuclear weapons capability to Pakistan, North Korea, and Iran, making its failure to order the arrest of Khan one of the greatest intelligence failures ever.