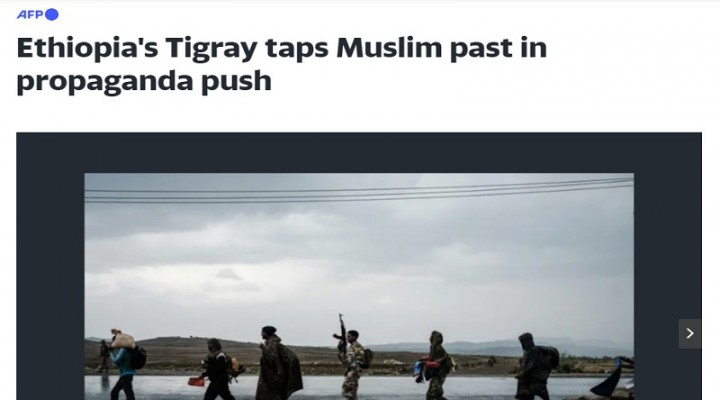 Exclusive- The AFP reported last week that “Ethiopia’s Tigray taps Muslim past in propaganda push” in their story about the TPLF’s latest outreach efforts. The gist is that this terrorist group is drawing attention to the region’s proud past of providing refuge to some of the first followers of the Prophet Mohammed in an attempt to attract more support across the international Muslim community, or Ummah. This is insincere and manipulative since the TPLF actually has a track record of targeting Muslims and mosques.

Community activist Faysel Kedir described his very difficult experience growing up as a Muslim in TPLF-dominated Ethiopia in a recent series of posts on Twitter. It’s worthwhile reading through them to better understand how discriminatory the country’s former rulers were towards the Muslim minority. His account complements images that have been widely shared on social media documenting the TPLF’s destruction of mosques and desecration of Qurans in Ethiopia’s Afar Region.

The Secretary General of the Amhara Region Islamic Affairs Supreme Council accused the terrorist group in late October of massacring madrassa students and destroying mosques in his region. Much more evidence of the TPLF’s anti-Muslim crimes exists online for those who are interested in searching for it. The examples that were shared are but a sliver of everything that they’ve done against that minority group. Quite clearly, the TPLF cannot be described as Muslim-friendly in any way whatsoever.

To the contrary, their anti-Muslim crimes make this group the most un-Islamic since the self-professed but falsely described so-called “Islamic State” (ISIS), which has also massacred Muslims and destroyed many mosques. This factual observation raises the question of what the TPLF hopes to achieve by insincerely presenting itself as Muslim-friendly in recent weeks, and the answer is that they’re simply trying to manipulate perceptions exactly as they’ve learned how to do during their 27 years in power.

In particular, this latest information warfare campaign is meant to achieve several strategic objectives. First, it intends to reinforce the false perception that the TPLF is always a victim of unprovoked aggression, which has never been true in its history. Second, it hopes to discredit the democratically elected and legitimate Ethiopian government that represents this ultra-diverse civilization-state in the eyes of the international Muslim community.

That aforementioned aim has three purposes: misportray the government’s anti-terrorist campaign as an anti-Muslim one in order to encourage domestic radicals to join the TPLF’s terrorist network; create uncomfortable optics for the government’s Emirati, Turkish, and other Muslim partners; and encourage radical foreigners to travel to Ethiopia to commit acts of terrorism there under faux religious pretexts in support of the TPLF.

These objectives make the TPLF’s latest information warfare campaign especially dangerous since it’s partially predicated on provoking the expansion of terrorist networks, including international ones, in the region. Nevertheless, they’re predicted to fail because Ethiopians and their supporters abroad have already done an excellent job exposing the group’s anti-Muslim history and recent crimes against this minority. These efforts have made the TPLF’s latest campaign counterproductive.

Had the TPLF not tried to engage in its insincere and manipulative Muslim outreach, then there wouldn’t have been a lot of interest among the international Muslim community about their true relations with fellow believers. The terrorists inadvertently created the pretext for their opponents to decisively counter this fake news campaign with historical facts, recent evidence, and credible testimonies. No honest person who learns about any of this can ever consider the TPLF to be Muslim-friendly.

As with everything that the TPLF does, there are some significant lessons to be learned from this by Hybrid War researchers. First, the group is doubling down on its typical weaponization of identity issues due to the decisive shift in the military dynamics that occurred over the past few months ever since Prime Minister Abiy went to the front lines to personally lead his country’s anti-terrorist campaign. This suggests that the TPLF has become very desperate lately.

Second, they’re evidently so desperate that they’re resorting to perhaps the most easily discredited and arguably counterproductive information warfare narrative possible, and that’s to insincerely present themselves as Muslim-friendly. Third, this particular narrative is being pushed due to the TPLF’s desire to replenish its recent losses by recruiting more terrorists within the country and abroad to their ranks by manipulating them into thinking that the Ethiopian government is anti-Muslim.

Fourth, despite that false narrative being easily discredited, it still has a chance of artificially circulating for a short period of time among the Western Mainstream Media by that group’s many agents of influence within those networks who want to create uncomfortable optics for Ethiopia’s Muslim partners. And fifth, it’s predicted that the TPLF will concoct some other weaponized identity narrative in the coming future once its latest one inevitably fails, which is bound to happen sooner than later.