HOME / WORLD / After Somalia, South Sudan and Sudan, the chaos is spreading to Ethiopia and soon to Eritrea 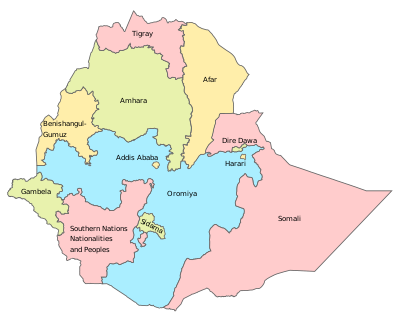 US ambassador Jeffrey Feltman is overseeing the extension of the Cebrowski doctrine to the Horn of Africa. After setting Sudan on fire, he is now targeting Ethiopia and sanctioning Eritrea. The Tigrayans (an Ethiopian people) are unknowingly serving Washington’s strategy against both these states and the African Union.

The Ethiopian National Electoral Commission has postponed the September 2020 parliamentary elections because of the Covid epidemic. The TPLF (the main Tigrayan political party) has nevertheless decided to hold the elections in its region of Tigray, thus clearly seceding from the rest of the country. The federal government obviously did not recognise these elections. The showdown led to civil war.

Ethiopia has 110 million inhabitants, of which only 7 million are Tigrayans.

In one year, TPLF officials and others from the federal government committed war crimes without it being known whether they perpetrated them on their own initiative or on the instructions of their authorities (in which case they would qualify as ’crimes against humanity’). The fact remains that the areas of famine are growing and the massacres are multiplying.

As always, each side accuses the other of the worst without considering that other protagonists may play a role. However, if we ask ourselves: “Who benefits from the crime?”, we should answer: “Those who hope to fracture the country a little more”.

The destruction of state structures in the Horn of Africa is the Pentagon’s objective after having destroyed state structures in the wider Middle East. The destruction of Sudan (divided in 2011 into Sudan proper and South Sudan) and Ethiopia (divided in 1993 into Ethiopia proper and Eritrea) has already taken place. Both countries are now in the midst of new civil wars that are likely to lead to new partitions.

Leading the way, the American diplomat Jeffrey D. Feltman first organised the war in Syria for ten years – i.e. the financing and arming of the jihadists – [1], before becoming President Joe Biden’s special envoy for the Horn of Africa. His speech, on November 1, 2021, before the Pentagon think tank, the U.S. Institute of Peace (equivalent to the National Endowment for Democracy -NED- [2] in the Secretariat of State), repeated the same rhetoric that was successively developed against Afghanistan, Iraq, Libya, Syria, Yemen and Lebanon.

The United States is already repatriating its nationals and retaining only the most essential embassy staff. Western news agencies are reporting that Addis Ababa will soon be conquered, marking the end of Ethiopia and the African Union, which has its headquarters there.The only country that has survived the Rumsfeld/Cebrowski doctrine [3] implemented by the Pentagon is Syria. If it has managed to do so, it is because its entire population is aware that only a state can protect it from enemies that are difficult to identify. The Levant is the region of the world where the very notion of a state was invented in ancient times. We are not talking here about power, but about the state, that is to say, about what allows a people to ’stand’ (stare in Latin, which gave rise to the state in European languages). After believing for a few months that a revolution was underway in their country, the Syrians understood that they were under attack from abroad and that only the state could save them. So whatever their grievances against the power, they served and defended the state. All other countries in the wider Middle East that have already collapsed were first divided into tribes or denominations.

Ambassador Jeffrey Feltman’s speech on behalf of the UN at the funeral of Meles Zenawi in 2012.

Ethiopia is a federal country with regions dominated by a particular ethnic group. The current conflict is experienced as Tigrayans versus Omoros and Amharas. However, the opposition to the federal government among the Omoros has formed an alliance with the Tigrayans. The latter are convinced that they are supported by Washington. They proudly display the brief speech made by Jeffey Feltman at the funeral of Prime Minister Meles Zenawi, a member of their tribe. They note that Feltman repeatedly accused the federal government of all kinds of crimes, briefly mentioning those of the Tigrayans and never mentioning their allies. This is not to understand the workings of US diplomacy after 9/11. Washington does not care about either side. It does not want either side to win. It wants to push both sides to kill each other until neither can raise its voice.

The conflict has brought back tribal prejudices that had more or less disappeared.

The federal Prime Minister, Abiy Ahmed, has done his utmost to reconcile his country with his former province of Eritrea, which is now independent. The quality of his action was recognised by the Nobel Committee, which awarded him the 2019 Nobel Peace Prize. It was also to highlight that a Pentecostal Christian had managed to make peace with Muslims. The fact is that it seems difficult to accuse Abiy Ahmed of ’crimes against humanity’ as was done against President Bashar al-Assad. But the example of 1991 Nobel Peace Prize winner Aung San Suu Kyi shows that no defamation is impossible. The United Nations High Commissioner for Human Rights, Michelle Bachelet, did not fail to say, in her report on the violations in Ethiopia, that Abiy Ahmed’s government was innocent… but that the crimes observed could be reclassified later as “crimes against humanity”. In short, he is an honest man, but that could be changed in retrospect if he had to be disposed of.

Incidentally, Abiy Ahmed will not only have to deal with a problem he thought he had solved. He also has to deal with the large Renaissance Dam, which is being filled, and which could cause salinisation of the Nile to the detriment of Sudan and Egypt, and resolve the territorial dispute with Sudan over the Al-Fashaga triangle. It must also guard against the Islamic Courts in Somalia and maintain the peace it has signed with Eritrea.

Precisely, the Tigrayan rebels not only attacked Ethiopia, but also bombed the border of Eritrea (a former province of 6 million inhabitants) in order to reignite the civil war that tore the former Abyssinian empire apart for forty years. Far from falling into this trap, Eritrea, whose president Isaias Afwerki is himself ethnically Tigrayan but close to China, pursued the TPLF into Ethiopian territory, but did not attack the Ethiopian army. Ambassador Jeffrey Feltman, continuing his policy of undermining peace in the region [4], then imposed sanctions on Eritrea [5]. Unexpectedly, Addis Ababa came to Asmara’s rescue, asking the US not to attack a state that “does not pose a threat to lasting peace” [6].

Several African leaders have interpreted Ambassador Jeffrey Feltman’s action as a move by Washington not only to dismantle Sudan and Ethiopia and then go after Eritrea, but also to reach out to the African Union.

The TPLF has a huge amount of weapons. They appear to have been ordered from Switzerland by the Director-General of the World Health Organisation (WHO), Tedros Adhanom Ghebreyesus [7]. Given Mr Tedros’ close ties to Beijing, one might assume that they came from China. This is unlikely. Rather, they are weapons supplied by Pentagon subcontractors.

Washington, which has already imposed sanctions on Ethiopia, is preparing to withdraw Addis Ababa from its African Growth and Opportunity Act (AGOA) programme. For the past decade, Ethiopian oil has been bought by US transnationals in exchange for US manufactured goods. This is not very advantageous, but if Ethiopia can no longer benefit from AGOA, it will no longer be able to export or import with the West. Unless Russia or China intervenes, famine and war will become widespread.

[6] “Ethiopian Statement on the US Government Sanctions Imposed on the Eritrean Government”, Voltaire Network, 13 November 2021.

The fake “military coup” in Sudan

0 thoughts on “After Somalia, South Sudan and Sudan, the chaos is spreading to Ethiopia and soon to Eritrea”