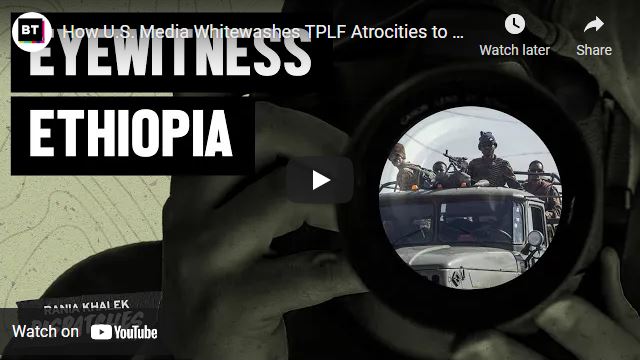 Why is the coverage of the war in Ethiopia so one-sided? What’s really happening on the ground? And how does it compare to the narrative being presented in U.S. media?

Rania Khalek is joined by Jemal Countess, a photojournalist with Getty Images and Redux Pictures who was formerly based in Ethiopia and has reported from around the country since the war started. He is currently based in the United States.

TIME CODES:
0:00 Intro
1:48 What is the war in Ethiopia really about?
3:33 Magnitude of TPLF violence that started the war
8:24 How the TPLF shapes the media narrative
14:26 TPLF atrocities in Amhara & Afar
20:50 TPLF sleeper cells
25:29 TPLF using child soldiers
28:55 Parachute journalism, ignorance and language barriers
34:52 TPLF working out of refugee camps in Sudan
39:41 Psychological warfare
45:39 What’s behind UN bias?
50:04 The TPLF is blocking aid
53:17 General sentiment of Ethiopians on the ground
56:39 The Oromo Liberation Front
1:00:18 Why is the US being so one-sided?
1:03:52 What do Americans need to understand about this conflict?