HOME / WORLD / Whatever happened to the Iran nuclear deal? 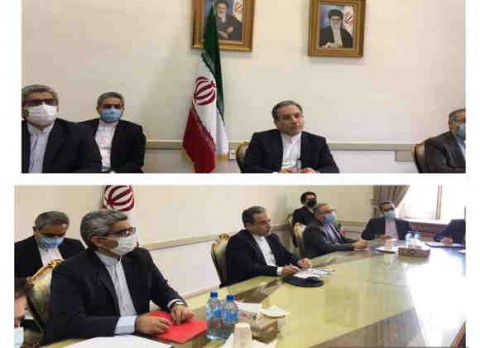 Neither side is admitting it, but the Vienna talks are going nowhere.

Does anyone remember the nuclear negotiations in Vienna, which have been going on for nearly a year and have been suspended since March?

Does anyone, be they European, American, or Iranian, know when they will resume or whether they have breathed their last? And another crucial question: why has their death not been officially announced, and a date set for their burial?

These questions and others are prompted by the motion passed by the US Senate on Wednesday opposing any nuclear deal that that submits to Iran’s demand for the Revolutionary Guards to be removed from the list of foreign terrorist organizations issued by the State Department every year.

From the first day the nuclear talks resumed, during the tenure of President Hassan Rowhani and foreign minister Mohammad Javad Zarif, we have asserted in this column that Iran does not want to give up its nuclear programmes and will pursue a policy of stalling and forbearance, for several reasons:

First: The Iranian leadership, represented by Supreme Leader Ayatollah Ali Khamenei and the hard-line camp, does not want to abandon its nuclear ambitions and risk a repeat the Iraq and Libya scenarios.

Second: This leadership does not trust the US. It considers it a strategic enemy that seeks to strip it of its nuclear deterrence, which has become a fait accompli, to serve Israel’s interests, consolidate its dominance over the entire Middle East, and create the appropriate environment to attack Iran.

Third: US power is rapidly eroding in favour of Iran’s allies Russia and China. The American blockade has become ineffective and Iran has managed to circumvent it. It is now exporting its expertise in this domain to countries worldwide, especially Russia.

Fourth: Iran is only a few weeks away from being able to manufacture the fissile material needed to build a nuclear weapon, should it decide to do so, now that it has become a threshold nuclear state with sufficient quantities of highly enriched uranium.

Current regional and international conditions favour Iran, notably the Ukraine war which has driven oil prices up to $115 per barrel and enabled Iran to increase production to nearly 2mn barrels per day, most of which go to China, without the US or Israel daring to intercept a single Iranian tanker.

Most recent about a final draft of the agreement being in the offing were misleading. They were aimed at buying more time, and succeeded in deceiving the US administration which is preoccupied up to its ears with the Ukraine war that could drag on for years or trigger a nuclear confrontation.

Some see the demand for the Revolutionary Guards to be taken off the terrorist list as the main obstacle to reaching a nuclear deal. I disagree. Iran has little to gain or lose from such a concession. It was much more important for Iran for the US to agree not to discuss Iran’s regional role, the disarming of paramilitary allies in the region, ending its missile programs, or involving Israel in the Vienna talks.

In short, the nuclear deal negotiations in Vienna are history. They are very low on the order of priorities of either Iran, the US, or the other powers involved. It makes no sense for Iran, which is targeted by the US and Israel, to relinquish its nuclear programme when it is in such a strong position due to the world’s need for its oil and gas, and when we could be on the brink of a global nuclear war.

The current state of global chaos wrought by the folly of the US is most conducive for Iran to realise its nuclear ambitions in whole or in part, after astutely siding from day one of the Ukraine crisis with the stronger and more cohesive Sino-Russian axis.

0 thoughts on “Whatever happened to the Iran nuclear deal?”