HOME / WORLD / Gridlock – Biden May or May Not Win, but Trump Remains ‘President’ of Red America 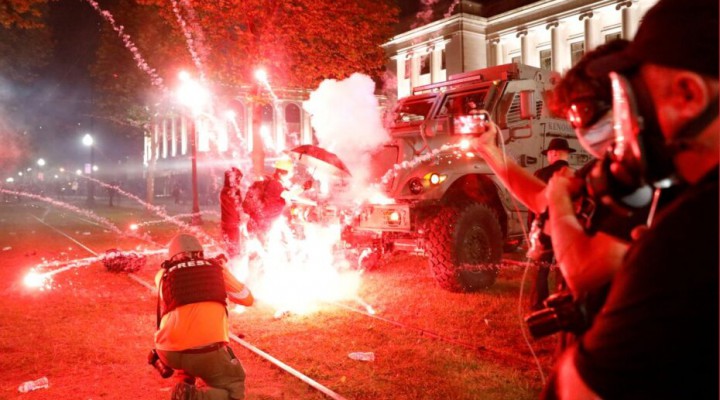 One clear outcome of the U.S. election was the collapse of the promised ‘Blue Wave’.

One clear outcome of the U.S. election was the collapse of the promised ‘Blue Wave’ – an implosion that marks the ‘beginning of the end’ to a powerful spell enthralling the West. It was the delusion which Ron Chernow, the acclaimed U.S. presidential historian, gave credence, as he contemptuously dismissed America’s “topsy-turvy moment” as purely ephemeral, and a “surreal interlude in American life”:  No longer can it be said that there is one ‘normal’.  Win or lose the White House, Red Trumpism remains as ‘President’ for half America.

Biden, by contrast, served as the prospect for Restoration – a return to a hallowed consensus in American politics – to a reassuring ‘sanity’ of facts, science and truth. Biden, it was hoped, would be the agency over-lording a crushing electoral landslide that would terminate irrevocably Trump’s rude interruption of the ‘normal’.  Biden supporters were rallied, Mike Lind, the American academic and author has observed, around the idea of America moving toward a ‘managed’ society – based on ‘science’ – that would be essentially finessed and controlled by a managerial, expert class.

Over time, Lind suggests, American society would begin to depart more, and more easily, from its republican roots, through a process already underway: via attempts to alter the Constitutional order, and other rules, to bring about a change in the way America is governed.

The notion however, of what America – as Idea – now constitutes, has fractured into two tectonic plates, moving apart in very different directions – and likely to move even further apart as each ‘plate’ remains convinced that ‘it won’ – and the sweetness of victory has been stolen.

The fracturing of the ‘One Normal’, by contrast, provides some kind of respite to much of the globe.

The fact remains that the election has produced a result in which it is abundantly clear that one half of the American electorate precisely voted to oust the other half. It is gridlock – with the Supreme Court and Senate in the hands of one party, and the House of Representatives and White House (possibly) in the hands of the other.  As Glenn Greenwald warns:

No matter what the final result, there will be substantial doubts about its legitimacy by one side or the other, perhaps both. And no deranged conspiracy thinking is required for that. An electoral system suffused with this much chaos, error, protracted outcomes and seemingly inexplicable reversals will sow doubt and distrust even among the most rational citizens.

Though the maths and maps suggests Biden will likely reach 270 Electoral votes, the old saying ‘It ain’t over ’till it’s over’, holds true. The electoral vote scenarios in the key ‘swing states’ would only apply if there is no litigation, fraud or theft.  However all three are in play – If you are stuffing the ballot box, you first wait to see what the regular vote is, so that you know how many votes you ‘need’ (mathematical anomalies aside) to push your candidate over the top.  Trump, somewhat rashly, gave out the GOP vote calculations at 02.30 on Wednesday, and hey-presto, loads of absentee ballots suddenly arrived at certain polling stations at around 04.00.  That seems to have happened in Wisconsin, where over 100,000 Biden votes appeared seemingly out of nowhere on a flash drive delivered by hand from a Democratic district. That put Biden ahead in Wisconsin – but litigation is in process. Likewise, it appears that a huge “absentee ballot” dump appeared in Michigan that heavily favored Biden.

This is just the beginning of a new and more uncertain phase that could go on for weeks. It may be that ultimately Congress will have to certify and make the final determination in late January. Meanwhile, there are some things we know with much higher certainty: The Republican majority in the Senate may hold until the 2024 election. So, even if Biden wins, his agenda will not hold through 2024.

A President may emerge, but it will not be, as it were, a settled one:  He or she cannot make claim to the ‘will of the majority’.  Whomsoever is certified by Congress cannot truthfully say they represent ‘the nation’.  Consensus is fractured, and it is difficult to see any leadership that can bring Americans together as a ‘united people’.

“There is not a single important cultural, religious, political or social force that is pulling Americans together more than it is pushing us apart,” David French notes in a new book Divided We Fall: America’s Secession Threat and How to Restore Our Nation.  French — an anti-Trump conservative — argues that America’s divisions are so great, and the political system so poorly designed to handle them, that secession may eventually be the result: “If we keep pushing people and pushing people and pushing people, you cannot assume that they won’t break”, he writes. (A 2018 poll found that nearly a quarter of each party – Democrat and Republican – characterized the opposing party as “evil”).

An ideological split, and the concomitantly contested America as Idea has huge geo-political implications, reaching well beyond America itself –  and principally for Europe’s élites.  European leaders did not see it coming when Trump was elected in 2016. They misjudged Brexit. And this year, they misread U.S. politics once again. They yearned for a Biden win, and they (still) fail to see the connection between the popular rebellion of Red under Mr. Trump, and the angry protests occurring across Europe against lockdown.

Separating tectonic plates – more strategically – usually signal a kind of dualism that betokens civil conflict.  In other words, their separation and moving apart turns into an ideological struggle for the nature of society and its institutional fabric.

Historian, and former War College Professor, Mike Vlahos warns (echoing Lind), that, “there is, here: more of a hidden – and thus in a sense, occult struggle – by which over time, societies begin to depart more, and more easily, from their roots.  The western dominant élites presently are seeking to cement their hold over society [moving towards a ‘managed’ society]: To have full control over the direction of society, and, of course, a framework of rule that protects their wealth.”

“Quite to the surprise of everyone, and given that the Republicans are being represented by a billionaire who has a great many friends in Manhattan – the Wall Street donors to the two campaigns, outnumber Trump’s donors for Biden by 5-to-1”.

Why, Vlahos asks, would Wall Street invest in a man – Biden – and in a Party, ostensibly seeking to move America toward this ‘managed’ progressive society?  Is it because they are convinced of a need radically to restructure the world’s economy and geopolitical relations?  Is this then Vlahos’ occult struggle?

Many of the élite hold that we are at that monumental inflection point at this moment –  In a nutshell, their narrative is simply this: the planet is already economically and demographically over-extended; the infinite economic expansion model is bust; and the global debt and government entitlement expenditure bubble too, is set to pop at the same moment.

A ‘fourth industrial revolution’ is the only way by which to ‘square this circle’, according to this mindset. The Reset is purposefully aimed to disrupt all areas of life, albeit on a planetary scale.  Shock therapy, as it were, to change the way we humans think of ourselves, and our relationship with the world.  The Great Reset looks to a supply-side ‘miracle’, achieved through full-spectrum automation and robotics.  A world where the money is digital; the food is lab-grown; where everything is counted and controlled by giant monopolies; and everyday existence is micromanaged by ever-monitoring, ever-nudging AI that registers thoughts and feelings before the people even get a chance to make those thoughts.

Mike Vlahos notes that in a curious way this American story mirrors that of ancient Rome in the last century of the Republic – with on the one hand, the élite Roman class, and on the other, the Populares, as Red Americans’ equivalent:

“This is in fact the dual story of Rome in the last century of the Republic, and it tracks very well — with the transformation going on today [in the U.S.] — and it is a transformation … The society which emerged at the end of the Roman Revolution, and civil war … had too, a totally dominant élite class.

“This was a new world, in which the great landowners, with their latifundia [the slave-land source of wealth], who had been the ‘Big Men’ leading the various factions in the civil wars, became the senatorial archons that dominated Roman life for the next five centuries — while the People, the Populares, were ground into a passive — not helpless — but generally dependent and non-participating element of Roman governance: This sapped away at the creative life of Rome, and eventually led to its coming apart.

“… today American inequality is as great as in the period right before the French Revolution, and is mirrored in what was happening to Rome in that long century of transformation. The problem we have right now, and which is going to make this revolution more intense, is I think, the cynical conclusion and agenda of Blue to just leave behind the Americans they do not need [in the New Economy] – which is to say all of Red America, and to put them into a situation of hardship and marginalization, where they cannot coalesce, to form a rival — as it were — Popular Front.

“What I think what we are seeing here [in the U.S.] is profound: American society – emerging from this passage, is going to be completely different.  And frankly, it already feels different. It already feels – as it has felt for the past four years – that we are in a rolling civil war norm now, in which deep societal strife is now the normal way in which we handle transfers of power.  Issues will be [momentarily] resolved, with the path of society [painfully] staked out through violent conflict. That is likely to be our path for decades ahead.

“The problem with that in the shorter term, is that there is still enough of the nation aroused and ready to fight this process. The problem: Can the last energies of the Old Republic still be harnessed against this seemingly inevitable, transformation?”

0 thoughts on “Gridlock – Biden May or May Not Win, but Trump Remains ‘President’ of Red America”