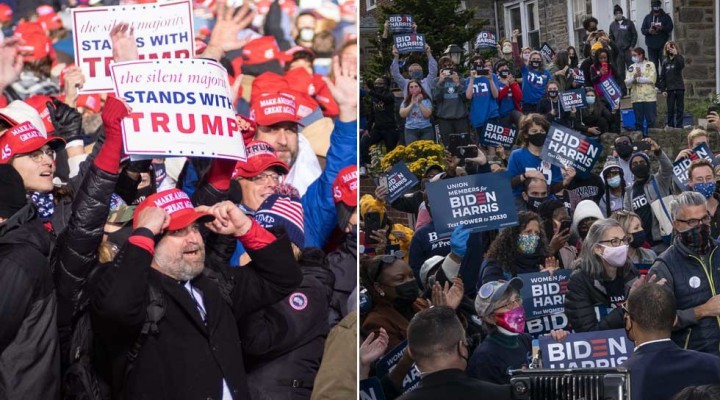 The 2020 election was proceeding smoothly. All the candidates had to do was be patient while the votes were counted, and the people would have a ‘clean’ election. But by speaking out, they have lit the blue-touch paper.

In an  opinion piece I wrote for RT last month, I predicted that, because both the Republican and Democratic parties had staked out positions vis-à-vis the 2020 presidential election “ostensibly founded on the basis of constitutional law,” they would “claim that the election is a matter of survival for the US,” thereby creating “the condition where neither can accept anything other than victory.”

I further predicted that “this election will likely be decided in the courts,” and that “while that legal battle rages, the extreme partisans from each side will take to the streets.”

Unfortunately, this prediction has been largely borne out by events. The Democratic candidate, Joe Biden, initiated the crisis when he spoke to supporters at his campaign headquarters in Wilmington, Delaware, in the early hours. “I’m here to tell you tonight we believe we are on track to win this election,” Biden said, even though at the time he spoke the election results appeared to show President Trump on a path to win the vote in crucial battleground states such as Pennsylvania, Michigan and Wisconsin. If these results came to pass, they would guarantee the Republican incumbent a second term in office.

Contradicting the results as they existed at the time he spoke, Biden declared that he was “feeling good” about Wisconsin and Michigan and that he was going to win Pennsylvania. “We knew because of the unprecedented early vote, the mail-in vote, that it’s going to take a while,” Biden said. “We’re going to have to be patient until the counting votes is finished. And it’s [not] over until every ballot is counted.”

Like a moth to fire, President Trump immediately tweeted out a response to Biden’s caveated declaration of electoral victory. “We are up BIG,” the president wrote, “but they are trying to STEAL the Election. We will never let them do it. Votes cannot be cast after the Polls are closed!”

We are up BIG, but they are trying to STEAL the Election. We will never let them do it. Votes cannot be cast after the Polls are closed!

Trump followed up his tweet by holding a press conference at the White House, where he called for “all voting to stop” due to massive voter fraud, and vowing to take the matter to the US Supreme Court for resolution. “This is a fraud on the American public. This is an embarrassment to our country,” Trump said.

“We were getting ready to win this election. Frankly, we did win this election.” His goal going forward, Trump said, was “to ensure the integrity for the good of the moment. This is a major fraud on our nation. We want the law to be used in a proper manner.”

Even before Biden and Trump gave their respective press briefings, government officials and property owners in major cities across the US were taking measures to secure government offices and retail outlets in anticipation of an outbreak of election-related violence by boarding up their windows as a means of forestalling the kind of large-scale looting that has become the hallmark of anti-establishment demonstrations.

For a fleeting moment, as the election returns pointed to a probable Trump victory free of the taint of controversy, it appeared as if these precautions would not be needed.

Then came the Biden address, followed by the Trump tweet and speech. Shortly after President Trump finished speaking, protesters and police skirmished in downtown Washington, DC, a possible precursor to even greater violence as activists on both sides mobilize to defend their respective self-declared “victory” in the 2020 presidential election.

The respective positions taken by these groups will only harden, together with their resolve, if the vote counting dispute advances, as threatened by President Trump, to the halls of the Supreme Court.

The US Supreme Court, in its current configuration, is itself an institution of great controversy. The heavy-handed approach taken by President Trump and Senate Republicans in rushing the confirmation of Associate Justice Amy Coney Barrett – so that she would be in a position to provide a 6-3 conservative advantage in any dispute that may come before the court as a result of the election – only further inflames the passions of activists who believe that President Trump planned on winning the election in a purposefully stacked court from the outset.

Moreover, Justice Barrett would be joining another Trump appointee, Brett Kavanaugh, who has already written a consenting opinion of a matter pertaining to the 2020 US presidential election, DNC v Wisconsin State Legislature, which provides insight into how the new conservative majority might act if called upon to intervene in the Biden-Trump vote counting dispute.

Kavanaugh’s opinion appears on its face to be tailor-made to support the kind of judicial intervention being sought by President Trump. If this matter does make it to the Supreme Court, and a majority opinion is issued which decides the election in favor of President Trump, it will only further exacerbate the violence and civic unrest brought on by the combined effect of the impolitic utterances of two septuagenarians, who lacked the wisdom and patience to let the election play out as determined by the American voter.

America on cusp of a Civil War: No matter who wins the election, there will be no peaceful transfer of power

Election Special Part 3: How The Bipartisan Swamp Is Engineering Election Chaos In Philadelphia