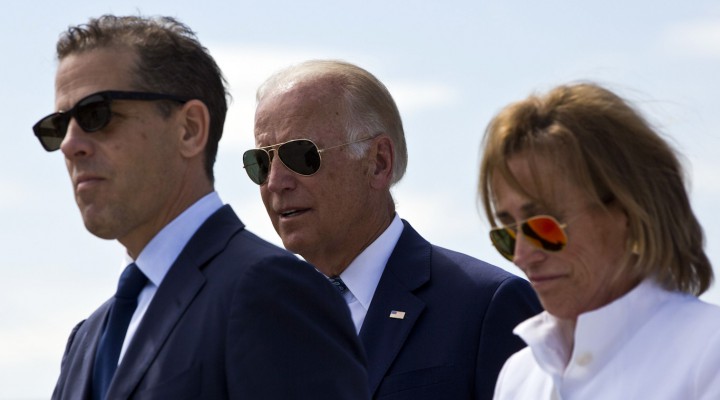 Whatever one thinks about Biden or Trump, or the veracity of the Burisma story, the way in which corporate media and social media giants unilaterally decided that Americans would not be able to decide for themselves raises profound questions about the nature of power and freedom of speech in society.

MPN- It was the classic October Surprise. Just weeks before the presidential election, conservative newspaper the New York Post released a bombshell report claiming that Joe Biden’s son Hunter had introduced his then vice-president father to top executives at Ukrainian energy firm Burisma, just months before the elder Biden pressured government officials in Ukraine into firing a prosecutor investigating the company.

The report was allegedly based on information from a laptop belonging to Hunter Biden, who, despite not having any relevant qualifications, sat on Burisma’s board, earning $50,000 per month for doing so.

In situations where one outlet publishes a huge scoop, it has become the journalistic norm for other outlets to produce copycat stories, reporting on the reporting. For example, when The New York Times claimed in June that Russia had been paying Taliban fighters to kill U.S. troops in Afghanistan, virtually the entire media landscape followed suit, repeating the questionable allegations. Yet this was not the case this time. Corporate media either ignored the Post’s report altogether or attacked it as “dubious” (CNN) “disinformation” (The Economist) a “conspiracy” (NBC News), “fake news” (The Guardian), or part of a Russian plan to take Biden down (CNN).

Corporate media either ignored the New York Post’s reporting or dismissed it as “disinformation.”

Was the report false? MintPress spoke to Jim Naureckas, editor of media watchdog Fairness and Accuracy in Reporting. “On the face of it, it’s fishy as hell,” he said. “Suddenly, in the last days of the campaign, this mysterious laptop falls into Rudy Giuliani’s hands, containing a slew of emails providing exactly the kind of evidence they were thirsting for.” Certainly, Guiliani, former Mayor of New York City, has spent the last few years running interference for President Trump. However, certain leaks, particularly those of Hunter Biden’s lewd photographs, are clearly real. Moreover, the Biden campaign offered a conspicuously half-hearted response when asked to confirm or deny the story’s veracity.

Whatever corporate media’s response, the reaction from the social media giants was far more extreme. Both Facebook and Twitter users from sharing or linking to the New York Post story. Indeed, Twitter locked the Post out of its account for two weeks, leading to Republican senator Ted Cruz to condemn CEO Jack Dorsey, claiming he was treating his platform like a “Democratic Super Pac.”

At least 69% of Americans use Facebook, with 43% (over 140 million people) getting their news from it. Twitter is also influential, with nearly a quarter of the country using the service. Thus, the decision to completely censor the story from two of the most important news mediums was an influential one, especially as the Post continues to stand by the veracity of its reporting, staking its reputation upon it.

“The attempts at social media censorship are a bad precedent,” Naureckas added. “And, if you think this story is not contributing a lot to our understanding of the 2020 race, counter-productive. Because what the Trump campaign is looking for is not a convincing expose of the Biden family corruption, but a bloody shirt that they can wave: The fact that this is the story Twitter didn’t want you to see will be far more compelling to Trump’s base than any actual story could be.”

It is impossible to judge if the story hurt Biden, but one clear casualty of the scandal was a co-founder of investigative news site The Intercept, Glenn Greenwald. Greenwald, who had a clause in his contract guaranteeing him virtually complete editorial independence, attempted to publish an article critiquing the media for their slavish obedience to the line that the story was inherently false. He noted that NPR’s Public Editor refused to touch it because, in his words, “we do not want to waste our time on stories that are not really stories… [or] waste the readers’ and listeners’ time on stories that are just pure distractions.” Meanwhile, CBS News reporter Bo Erickson was widely attacked by other journalists for merely asking the Democratic presidential candidate to comment on the Post’s allegations.

Instead, editors at The Intercept drew a line, refusing to publish it. As a result, Greenwald resigned from his position and released it on his new blog. If he was expecting sympathy from his colleagues, he would be bitterly disappointed. The Intercept itself described his actions as a “tantrum,” and his allegations of censorship as “preposterous.” A host of high-profile media figures backed The Intercept and condemned Greenwald. Perhaps more surprisingly, the knives were out for him even among the staff of The Intercept. “Glenn was not ‘censored’ — he was edited, and edited well. Crying censorship is a marketing ploy to gin up subscribers for his new Substack. Are people really going to fall for it?” wrote Naomi Klein, also suggesting he was directly and callously helping Donald Trump win re-election: “Imagine not caring that you are feeding into this garbage at this point in history.”

Greenwald appeared to have few backers in the mainstream press. One, however, was cult journalist Matt Taibbi, who expressed his exasperation at the groupthink among the corporate media to MintPress.

It’s like everything else in this environment — outlets settle on a narrative in the first five minutes and then don’t budge. With Glenn the reaction was, ‘Lol, he thinks editing is censorship, what a baby.’ And they haven’t moved off that. Kind of amazing that no one sees the irony in the herd response to what was essentially a critique of herd journalism.”

In a volatile industry like the media, where it is hard to keep a job, journalists must know where the hard limits of speech are at their outlets. When reporters are condemned for challenging a presidential candidate or taking an allegation seriously, it sets a worrying precedent and disciplines journalists into staying well within the bounds of expressible opinion.

Biden appears likely to win a narrow victory over Trump in the presidential election, although Democrats appear to have done less well in the Senate and the House. Considering the closeness of the result, it is quite possible that the media squashing the Biden/Ukraine story made the difference in getting the 77-year-old Delawarian over the line. As such, it might have been at least as consequential as the infamous Comey letter, which some claim put pay to Hillary Clinton’s chances in 2016 and paved the way for Donald Trump.

October Surprises are a feature of most presidential elections. The Democrats had their own one this year, The New York Times revealing that Trump had paid only $750 in taxes in 2016 and 2017 and that he was $400 million in debt. Going further back, the most notorious October Surprise occurred in 1980, when Ronald Reagan intervened in the Iran hostage crisis to make sure no Americans were released until after the election, robbing President Carter of any good publicity.

Whatever one thinks about Biden or Trump, or the veracity of the Burisma story, the way in which corporate media moved as one to squash the story and how social media giants Facebook and Twitter unilaterally decided that Americans would not be able to see the story and decide for themselves raises profound questions about the nature of power and freedom of speech in society.

Trump and China” Advisor Says Trump got Biden Intel (personally) from Chinese Intelligence, Which is Treason

The End of the Trump Presidency is Here

0 thoughts on “Did Media Spiking the Ukraine-Burisma Story Win Joe Biden the Election?”