HOME / WORLD / Electoral Musings: Notes From The Edge Of The Narrative Matrix 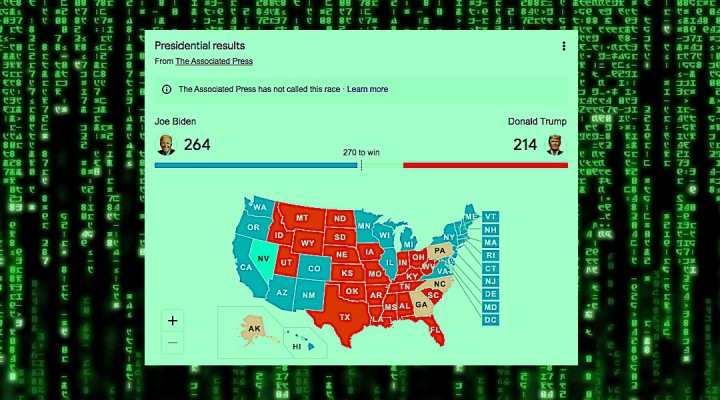 It is perfectly valid for the American public to express outrage over Trump’s declaration of victory, but the entire American media and political class forever lost all legitimacy to condemn a nation’s leader for illegitimately crowning themselves by backing the Venezuela coup.

Watching Democrats’ inability to handily defeat a crazy reality TV host in two elections is like seeing someone pick a fight with a six year-old girl and getting their ass kicked, then coming back with a bunch of their friends and watching them all get carried off on stretchers.

All the hours of post-electoral analysis you’re about to hear are just mental gymnastics to avoid confronting one very simple fact: that the way the Democratic Party has been securing funding is incompatible with securing votes. That’s the only correct answer to the question of what went wrong for the Democrats this year. They court wealthy donors who in exchange demand policies which hurt ordinary Americans. Ignore all answers besides this one.

People simply are not going to support a party which does not advance their interests. If the Democratic Party were obtaining material benefits for people, they would dominate the US government. But that would mean taking things away from the donor class, so it’s been a no-go. Meanwhile the donor class is never going to support a party which acts against its interests. Getting enough votes and getting the support of wealthy elites are therefore mutually exclusive endeavors. You cannot have both. Dems will keep struggling with votes until they figure this out.

It is good that people are criticizing the Democrats’ garbage performance against a cartoon character opponent. But let’s not kid ourselves: as soon as they get Biden in the line is going to be “We’re doing fine; nothing needs to change. Biden beat the socialist and then beat Trump. Where’s brunch?”

Democrats ignored the left and courted Republicans instead under the mistaken belief that there are millions of Americans who want to coddle the rich, kill the poor, shit on disadvantaged groups and destroy the environment, but to do so with decency.

Maybe there are a lot of liberals who are closet Trump voters. This dark, secret passion they can never admit to publicly, like how all conservatives secretly love gay sex.

Presidents are just narrative management ops the US empire uses to explain to the public why it is doing the things it was always going to do. Like explaining death to children using puppets.

Ignore everyone who’s bitching about the Electoral College right now. They only ever complain about it during actual elections and then forget all about it until the next one.

The idea that everything will be fine once Trump’s gone is more dangerous than Trump.

The more desperately aggressive and authoritarian the western empire becomes, the more the blue checkmarked commentariat who protect it are going to expose themselves for what they really are.

This is all you’re ever seeing with those liberals and fauxgressives who spend all their time on Twitter taking pot shots at anti-imperialists and finger wagging at people for being too far left. They’re just protecting an increasingly indefensible world order from its critics.

“Antifascists” who support Biden should call themselves Arguably-Slightly-Less-Fascist.

The dumbest thing about this presidential race has been the narrative that nations who will be targeted by the US no matter who wins have a really strong preference for one of the candidates.

Beauty is just a word for the experience of having truly seen something.

0 thoughts on “Electoral Musings: Notes From The Edge Of The Narrative Matrix”