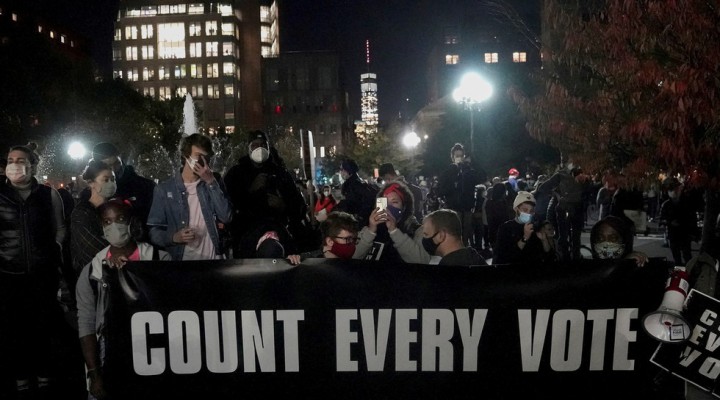 The American silly season of presidential electoral politics has reached its final phase, where both sides posture as if they have won, all the while deploying legions of lawyers in a bid to shape a victory the voters could not.

In the end, the future of the United States and, in many ways, the rest of the world, will be decided not by the American voter, but a much more nefarious form of life – the American lawyer. The Trump campaign has already announced that it will be mounting legal challenges to the manner in which votes were counted in at least three states – Wisconsin, Michigan and Pennsylvania – with the probability of additional challenges quite high as the electoral drama unfolds in the days to come. The race for 270-plus electoral votes – the ultimate arbiter of victory – has moved past the traditional election cycle of vote casting and counting, and entered the dark, strange waters of the American legal system.

For the Trump campaign, the inconsistency of its position seems to escape them as they demand that every vote be counted in Arizona and Nevada in order to secure a Trump victory, while clamoring for the vote counting to be stopped in Georgia and Pennsylvania, where the processing of uncounted votes threatens to push Biden ahead. Consistency of argument, however, only matters if one was dealing with a singular issue or situation; in a country where every state is a sovereign entity when it comes to managing a national election, each state presents its own unique legal challenge to those seeking to legally manipulate a desired outcome, and as such the Trump lawyers will demand that they keep voting where they need votes, and stop voting where they don’t.

For Biden, the legal battle is, for the moment, much simpler – keep the lawyers out of the process, and let the vote count continue unabated, since the numbers game favors an eventual positive outcome for them. This will be the crux of their defense to any charges of election malfeasance by the Trump campaign. In many ways, the task of the Biden team is easier, since it relies on letting American democracy unfold unabated and unhindered by outside influence, especially from a federal judiciary historically reticent about federal interference in state-run elections.

While this legal drama unfolds, there will be other theatrics taking place, as both campaigns posture as if they are the heir apparent to Trump’s first term in office. Each side will seek to create an atmosphere of inevitability, both in terms of shaping public perception as well as that of the courts regarding the legitimacy of their claim to the presidential throne going forward. In short, if a campaign cannot sell the notion that they have won the ultimate American political prize, then those who are the final arbiters of victory may not be inclined to give it to them.

While one would think that in the staging of this act, President Trump and his team should have the upper hand, given that they already occupy the White House and have access to the presidential levers of power and authority, the fact is the president is very much on the defensive in this matter – like any defendant appearing before a court of law, he has cast his lot with his lawyers, and runs the risk of having the public, which is more inclined to be swayed by perception than legal technicalities, lose focus. If the pro-Trump crowd turns to mob violence to make its point, the courts will struggle to find that undertaking a controversial move such as stopping the counting of votes, or invalidating ballots already counted, can contribute to the greater good. For Trump, whose campaign was boosted by his appeals for mass populism, reining in the emotions of his base while preserving their confidence in his cause may prove to be a bridge too far.

For Joe Biden, the task of appearing presidential in the face of ongoing electoral controversy is not only simpler, but also follows a more logical path. Once his campaign can make a viable claim to having won 270-plus electoral votes (a claim that would be based on actual vote count, as opposed to the intervention of the courts), the Biden team will seek to move away from being an organization seeking election to an administration in transition. This is not Joe Biden’s first presidential rodeo, having been a part of similar presidential post-election transitions in 2008 and 2012. Biden has surrounded himself with an experienced team of political operators encompassing every facet of the policy spectrum, and these people will immediately morph away from their status as campaign advisers into a new role as Biden administration transition facilitators. Unlike the experience of the Trump campaign in 2016, when the formation of a transition team took on the appearance of a pick-up game of playground football, a Biden transition team will be polished and professional, easily selling the notion that, if empowered by the courts, they will be ready to govern on day one.

One of the reasons a Biden administration team’s transitional theatrics will come off as convincing is the reality that it isn’t just a show, but in fact a necessary function of governance – if and when the 2020 presidential election is decided, and a Biden administration is anointed by the courts, they must be prepared to assume the reins of power on January 20, 2021. There is no room for error, and the clock will not wait while the legal challenges to the election results work their way through the court system.

The biggest challenge faced by the Biden team will be in holding back the emotions of their activist supporters, who will be rightly enraged that President Trump is seeking to undo the will of the people by appealing to a judiciary he spent the past four years packing with his conservative supporters. Given that one of the triggers for possible judicial intervention is the preservation of good order in the face of chaos, any large-scale public unrest by Biden supporters and sympathizers will be counterproductive to the Biden goal of convincing the courts that their candidate is not only the legal heir apparent, but the right man for the job when it comes to preserving the greater good. Any Biden transition effort must go out of its way to make sure the public is appraised of the reality of its effort, and not get caught up in simply competently executing a role which, in and of itself, is not readily understood by the public.

There is every reason to expect that the legal battle for the future of the American presidency will have run its course by mid-December 2020, when the Electoral College is scheduled to meet and certify the results of the election. Unfortunately for American democracy, the electors’ normally perfunctory task will not be without controversy, given that their votes will have been tainted by the stain of judicial intervention, in one form or another. But they will, in one form or another, carry out their duties, and select one man, either Donald Trump or Joe Biden, to be the next president. The degree to which the American public will embrace that result will depend in large part on the skill the eventual winner displays in selling himself as the winner in the days and weeks to come.