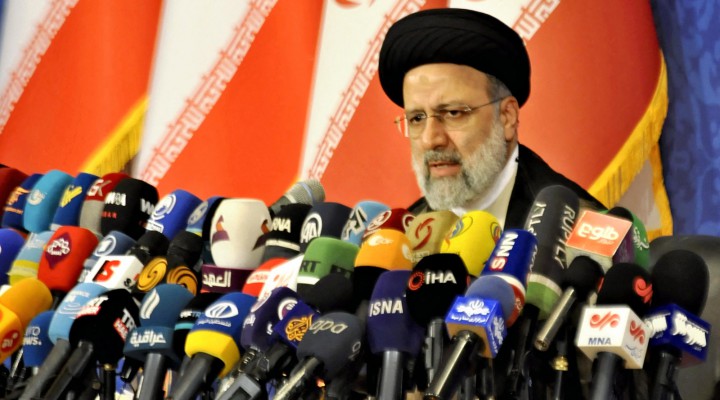 In his first press conference as President-Elect with 62% of the votes, Ebrahim Raeisi, facing a forest of microphones, came out swinging and leaving nothing to the imagination.

On the JCPOA, or Iran nuclear deal, the dossier that completely obsesses the West, Raeisi was clear:

– the US must immediately return to the JCPOA that Washington unilaterally violated, and lift all sanctions.

– The JCPOA negotiations in Vienna will proceed, but they do not condition anything in terms of Iran’s future.

– The Iranian ballistic missile program is absolutely non-negotiable in the framework of the JCPOA, and will not be curbed.

Asked by a Russian journalist whether he would meet President Biden if a deal was struck in Vienna and all sanctions lifted – a major “if” – Raeisi’s answer was a straight “No”.

It’s crucial to stress that Raeisi, in principle, favors the restoration of the JCPOA as its was signed in 2015 – following the guidelines of Leader Ayatollah Khamenei. But if the Vienna charade goes on forever and the Americans keep insisting on rewriting the deal towards other areas of Iranian national security, that’s a definitive red line.

Raeisi acknowledged the immense internal challenges he faces, in terms of putting the Iranian economy back on track, getting rid of the neoliberal drive of outgoing Team Rouhani, and fighting widespread corruption. The fact that election turnout was only 48.7%, compared to the average 70% in the prior three presidential contests will make it even more difficult.

Yet in foreign policy Iran’s path ahead is unmistakable, centered on the “Look East” strategy, which means closer cooperation with China and Russia, with Iran developing as a key node of Eurasian integration or, according to the Russian vision, the Greater Eurasia Partnership.

As Professor Mohammad Marandi of the University of Tehran told me “there’s going to be a tilt eastward and to the Global South. Iran will improve relations with China and Russia, also because of US pressure and sanctions. President-elect Raeisi will be better positioned to strengthen these ties than the outgoing administration.”

Marandi added, “Iran won’t intentionally hurt the nuclear deal if the Americans – and the Europeans – move towards full implementation. The Iranians will reciprocate. Neighbors and regional countries will also be a priority. So Iran will no longer be waiting for the West.”

Marandi also made a quite nuanced distinction that the current policy was “a major mistake” by Team Rouhani, yet “not the fault of Dr. Zarif or the Foreign Ministry, but the government as a whole.” That implies the Rouhani administration placed all its bets on the JCPOA and was completely unprepared for Trump’s “maximum pressure” offensive, which de facto decimated the reformist-minded Iranian middle class.

In a nutshell: in the Raeisi era, exit “strategic patience” when dealing with the US. Enter “active deterrence”.

A key node of BRI and EAEU

Raeisi was met by those who control the “international community” narrative with proverbially derisive and/or demonizing epithets: loyal to the “repressive machinery” of the Islamic Republic, “hardliner”, a violator of human rights, mass executioner, anti-Western fanatic, or simply “killer”. Amnesty International even called for him to be investigated as perpetrator of crimes against humanity.

Facts are more prosaic. Raeisi, born in Mashhad, has a PhD in jurisprudence and fundamentals of Islamic law and a further jurisprudence degree from the Qom seminary. His previous positions include member of the Assembly of Experts and chief of the Judiciary.

He may not have been exposed to the Western way of life, but he’s not “anti-Western” – as he believes Iran must interact with all nations. Yet foreign policy must follow Khamenei’s guidelines, which are very clear. Without understanding Khamenei’s worldview, any analysis of Iranian complexities is an idle sport. For essential background, please refer to my Asia Times e-book Persian Miniatures.

It all starts with Ayatollah Khomeini’s founding concept of an Islamic Republic, which was indeed influenced by Plato’s Republic as well as Muslim political philosopher al-Farabi’s Virtuous City (also Plato-influenced).

On the 40th anniversary of the Islamic Revolution, Khamenei updated his concept of foreign policy, as part of a clear map for the future. This is absolutely required reading to understand what Iran is all about. An excellent analysis by Mansoureh Tajik emphasizes the ways the system strives for balance and justice. Khamenei could not be more straightforward when he writes,

“Today, the challenge for the US is Iran’s presence at the borders surrounding the Zionist regime and dismantling the illegitimate influence and presence of America from West Asia, Islamic Republic’s defense of Palestinian fighters at the heart of the occupied territories, and defense of holy flag of Hizbullah and the Resistance in the entire region. If in those days, the West’s problem was preventing Iran from buying even the most primitive forms of arms for its defense, today, its challenge is to prevent the Iranian arms, military equipment, and drones reaching Hizbullah and the Resistance everywhere in the region. If in those days, America imagined it can overcome the Islamic System and the Iranian nation with the help of a few self-selling Iranian traitors, today, it is finding itself in need of a large coalition of tens of hostile yet impotent governments to fight Iran. Yet, it fails.”

So it’s Iran as a key Eurasian connectivity hub that is going to shape its geopolitical and geoeconomic future. And not the West, as Marandi stressed.

On the Russian front, the impetus will come from the development of the International North-South Transportation Corridor (INSTC), which directly competes with an East to West overland corridor that can be hit anytime with extra-territorial American sanctions.

Iran has already struck an interim free trade agreement with the EAEU, active since October 2019. A full-fledged deal – with Iran as a full member – may be struck in the first few months of the Raeisi era, with important consequences for trade from the South Caucasus to wider Southwest Asia and even Southeast Asia: Vietnam and Singapore already have free trade zones with the EAEU.

The American rhetoric about Iran’s “isolation” does not fool anyone in Southwest Asia – as the developing interaction with China-Russia attests. Add to it Moscow’s reading of the “mood for deepening dialogue and developing contacts in the defense sphere”.

So this is what the Raeisi era is leading to: a more solid union of Iranian Shi’ism, socialism with Chinese characteristics and the Greater Eurasia Partnership. And it doesn’t hurt that state of the art Russian military technology is quietly surveying the evolving chessboard.