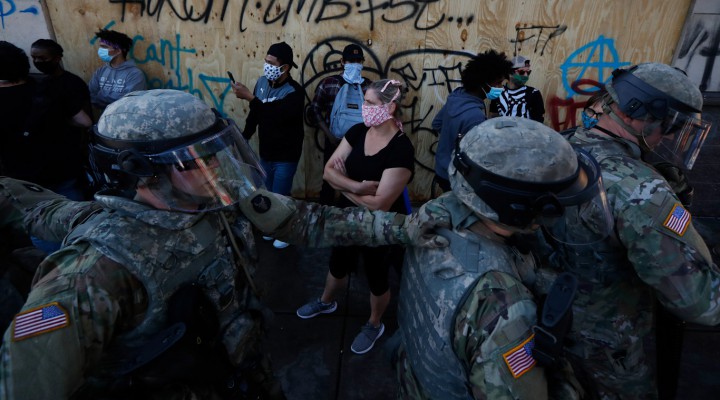 Already deployed in multiple states, over 10,000 guardsmen are scheduled to flood Minneapolis streets – representing the first time in its 164-year history that the organization has been fully mobilized – and they have been authorized to carry live ammunition.

MPN– The national security state and the military are joining forces with the police and national guard to counter the nationwide protest movement that has exploded since the police killing of unarmed black man George Floyd on Monday.

In response to the police capitulation in Minneapolis, leaving their precinct to be burned down, Minnesota governor Tim Waltz has called on the National Guard to put down the revolt. Already deployed in multiple states, over 10,000 guardsmen are scheduled to flood Minneapolis streets, representing the first time in its 164-year history that the organization has been fully mobilized. They have been authorized to carry live ammunition. While Waltz’s actions might appear drastic, it appears he is actually a moderating influence, as Washington is pushing him to put active duty military on the streets.

“I think it’s really important again for folks to think about the uniqueness of our nation of protecting civil liberties is to make sure that civilian control of the military and especially inside the United States is carried out by civilians, by citizen soldiers by National Guard,” he said.

Yesterday, the Pentagon ordered soldiers and military police from Fort Bragg, North Carolina, Fort Drum, New York, Fort Riley, Kansas and Fort Carson, Colorado, to be ready to be deployed potentially anywhere in the United States within a matter of hours. Authorities also deployed a Predator Drone to Minneapolis to monitor the protests.

According to documents leaked to The Nation, the military is actively monitoring uprisings in six other states – New York, Ohio, Colorado, Arizona, Tennessee, and Kentucky. Waltz revealed yesterday that he is already working closely with the military, receiving “intelligence support of what they’re seeing, what they’re signal intercepting, they have obviously from N.S.A. and others massive support to be able to see who these operators are.” The N.S.A. is supposed to be a purely foreign intelligence agency, but, as Edward Snowden revealed, the agency was conducting a massive spying operation both internationally and domestically. Waltz later claimed that he misspoke when referencing the N.S.A. by name.

Some National Guard members appear to be profoundly uncomfortable with the idea of being deployed to oppose protestors. One anonymous guardsman told The Nation’s Ken Klippenstein: “We’re a combat unit not trained for riot control or safely handling civilians in this context. Soldiers up and down the ranks are scared about hurting someone, and leaders are worried about soldiers’ suffering liability,” adding that, “My [colleagues] are people of common sense and common decency. They may not want to step over any lines when doing their jobs, but wanting only goes so far when you’re under-trained and under-equipped.”

President Trump, however, appears very keen to see the National Guard respond to the protests. “I can’t stand back and watch this happen to a great American City, Minneapolis. A total lack of leadership. Either the very weak Radical Left Mayor, Jacob Frey, get his act together and bring the City under control, or I will send in the National Guard and get the job done right,” he stated, adding that the rioting “thugs” were dishonoring Floyd’s memory. “When the looting starts, the shooting starts. Thank you!” he concluded, clearly encouraging a violent crackdown against protesters.

The country’s police already resemble its heavily armed military. Between 1998 and 2014 the value of military hardware given to U.S. police departments ballooned from $9.4 million to $796.8 million, with police departments across the country equipped with armored personnel carriers, tanks, and other machines appropriate only for a battlefield. Police are also increasingly trained to view citizens as threats and criminals, rather than members of the public they are serving.

The nationwide demonstrations flared up after video of Floyd’s murder went viral on social media. Officer Derek Chauvin – somebody with a long history of police brutality (including killing) – can be seen suffocating a handcuffed Floyd for nearly nine minutes, including for nearly three minutes after he loses consciousness, despite onlookers pleading with him not to kill him. Protests have erupted in dozens of locations across the United States and internationally, enraged by the latest example of racist police brutality caught on camera. On Friday, Chauvin was charged with third degree murder and manslaughter.

Both America’s police and army have serious problems with white supremacy. The modern police force evolved from the slave patrol forces of the 18th and 19th centuries, and were a key force in maintaining and promoting white supremacy and the slave labor system. Meanwhile, Matt Kennard’s book, Irregular Army, details how, after 9/11, the U.S. military began actively recruiting from Neo-Nazi gangs and militias in order to fulfil its recruitment quotas. The deep state has always attempted to infiltrate and derail struggles for civil rights; the F.B.I. infamously carried out a campaign of targeted assassinations against the black liberation movement between the 1960s and 1980s, even sending a letter to Martin Luther King Jr. telling him to kill himself. It is unlikely, therefore, that the national security state’s reaction to these latest protests will be a positive one.