HOME / SOCIAL/CULTURAL / You think US cops need to be better armed? Here’s why full-on European-style riot control police would be a DISASTER in America 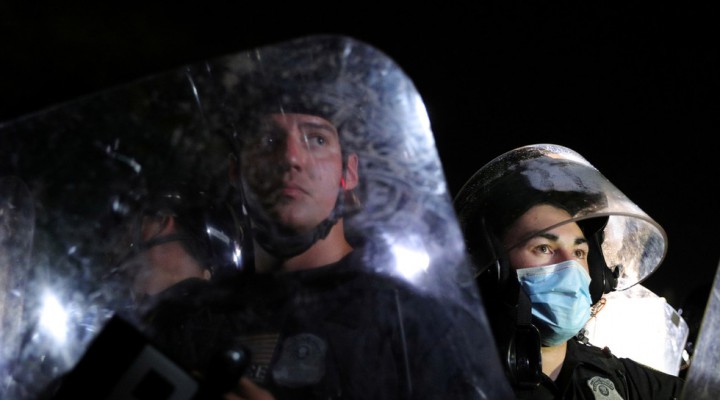 The violence that has gripped Minneapolis begs for the kind of effective deployment of riot police seen in Europe. But it’s not about batons or tear gas – without people’s trust, the police are the problem, not the solution.

For the past several days, the world has watched in awe and horror as the City of Minneapolis, Minnesota, ceded control of the streets to bands of marauding demonstrators protesting the death of George Floyd at the hands of four Minneapolis police officers. While riot police have periodically materialized to temporarily regain control of neighborhoods subjected to arson and desecration at the hands of an angry citizenry, these specialized units, despite their body armor, batons and tear gas, have so far proven incapable of holding their ground.

This has led some to question the Minneapolis approach to riot control, especially when contrasted with the specialized riot police employed by nations such as France, Germany and Russia.

The comparison of European and US law enforcement when it comes to crowd control is not a fair one, in effect comparing apples to oranges. The specialized riot police of France (the CompagniesRépublicaines de Sécurité, or CRS), Germany (the Bereitschaftpolizei, or BePo) and Russia (the OtryadMobil’nyyOsobogoNaznacheniya, also known as the Special Purpose Mobile Unit or OMON) are dedicated military-style formations specifically organized, equipped and trained to perform riot police functions. The precision and efficiency — often times brutally so — of these dedicated riot police have been on display on numerous occasions in recent years, and at no time did any of these forces surrender their respective cities to the depravations of the demonstrating civilian elements.

This begs the question — what has gone wrong in Minneapolis, or for that matter the rest of the United States, where city after city has seen its streets taken over by angry crowds who leave a trail of burned and looted buildings in their wake?

First and foremost, there is no national equivalent of the CRS, BePo or OMON in the United States. The closest organization that could fit this bill would be the National Guard or active duty military component, but even they lack the kind of riot control training and experience of the dedicated European riot police.

Moreover, the culture and history of the United States, which fought a revolution to free itself of the tyranny of an occupying military force, combined with the laws of the United States, founded in a Constitution affording every American citizen with specified civil liberties, are anathema to the concept of large militarized formations of police whose sole function is suppressing the very freedoms of assembly and speech they are ostensibly guaranteed.

This does not mean, however, that American law enforcement is incapable of effective crowd control when needed.

They have the gear and they know how to use it

To understand the American approach to riot control, one must be familiar with the basics of American law enforcement recruitment and training. For instance, the City of Minneapolis Police Department is governed by the State of Minnesota Board of Police Officer Standards and Training (POST), which sets the minimum standards required for prospective police officer candidates. Qualified candidates attend a POST-approved police academy in Minnesota for 14-16 weeks of training, whose multiple courses do not include training in riot control.

Then follows six months of supervised field training, and finally, the new police officer is sworn in. Only now can they be assigned to specialized units responsible for riot control, known in Minnesota as Mobile Field Forces (MFF).

Minnesota MFF members attend a 3-day Field Force Operations (FFO) course where, according to the Department of Homeland Security (DHS) website, they are trained“in protest types and actions, legal considerations, responsibilities of mobile field force teams, and crowd-control methods,” as well as other, more specialized courses.

Minnesota MFF members who have qualified as instructors can then train municipalities on MFF tactics using the same model. The training “package” includes the provision of 100 sets of specialized riot gear and enables the local MFF to field a unit which is compatible with not only the Minnesota MFFs, but also the MFFs of other municipalities, allowing for rapid, effective reinforcement in a time of crisis.

In short, the City of Minneapolis can field a riot control force every bit as effective as those employed by Europe.

The question remains, therefore, why such a force has not been unleashed on the demonstrators who are terrorizing the streets of Minneapolis, or the scores of other American cities facing violent protests not only against the murder of George Floyd, but an accumulation of grievances tied to decades of racial injustice, real or perceived, at the hands of the very same police forces.

Because the United States does not possess a dedicated professional force of riot police, the task of beating down (literally, in some cases) the protests rests with the very police forces which have been accused of the very injustice which prompted the unrest to begin with.

A society will allow itself to be subjected to policing to enforce the laws that its citizens have agreed are necessary to its functioning. When, as is the case in Minneapolis and other US cities and municipalities, the citizenry loses confidence in those who police it, the very fabric that holds the community together begins to unravel. This is what is transpiring in Minneapolis — the people no longer trust the police, and as such will no longer respect the police. If hundreds of riot police for whom a demonstrating citizenry no longer imbue with the cloak of legitimate authority attempt to violently repress a demonstration whose very roots rest in the illegal violence imposed on these same citizens by these very police, the result will be catastrophic, engendering the kind of violence that spells the death knell of organized society.

This is the reality of Minneapolis today. And this is the same struggle being faced by police departments and city governments across the United States — if decisive action is taken to suppress civil discontent, then society itself is in danger of collapse. America is facing a long, hot summer where decades of social injustice, exacerbated by the socio-economic inequities of the government response to the coronavirus pandemic, have put its citizens at odds with their government. In many cases, the primary source of this discontent are the very police that governments need to call upon to restore order. It’s a Hobson’s choice — act and risk an escalation of violence that will burn the city down or do nothing and watch the city burn down. Either way, the city is going to burn down, and the fire won’t go out until either a semblance of social justice is restored, or there is nothing left standing.

0 thoughts on “You think US cops need to be better armed? Here’s why full-on European-style riot control police would be a DISASTER in America”