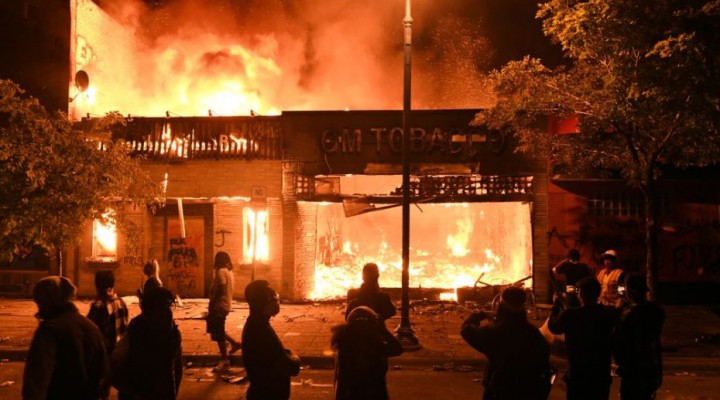 The shocking truth is that lynching of African-Americans in the U.S. is alive today as it was during the apartheid era of southern states and their Jim Crow segregationist laws which existed within living memory.

“Being black in America should not be a death sentence” – so said Minneapolis Mayor Jacob Frey following the shocking, gruesome killing of George Floyd by a police officer on the streets of Saint Paul.

Floyd (46) was filmed by bystanders handcuffed and pinned to the road face down while a cop pressed his knee on his neck for eight minutes. Despite desperate pleas from Floyd that he could not breathe and protests from the bystanders to let him go, the police officer choked him to death.

Four officers have been reportedly fired following public outrage over the killing of Floyd. Minneapolis and other cities have seen riots for several nights running since the incident on May 25. Video footage shows the victim was not resisting arrest as the police force had earlier claimed. He was arrested on suspicion of passing a fake $20 note at a restaurant. The use of such excessive force by the police – even if the forgery claims are substantiated – is obscenely disproportionate.

Evidently, George Floyd was lynched by a white cop on the street of city in broad daylight. The victim’s real “crime” was being black.

Studies of official data consistently show that U.S. black males, proportionate to population, are far more likely to die from encounters with police officers compared with their white counterparts.

The case of George Floyd is grimly reminiscent of that of Eric Garner who was choked to death by a police officer in New York City in 2014. Garner was apprehended on suspicion of selling contraband cigarettes on the street. He also pleaded for mercy while in a stranglehold, telling officers he could not breathe before being throttled to death.

Most deaths, however, at the hands of law enforcement officers are caused by firearms. Invariably, the excuse is parroted that the officer “felt his life was being threatened” by the victim. Philando Castile was shot dead with five rounds at the wheel of his stationary car in July 2016 because the traffic cop claimed Castile was moving his hand suspiciously. That was after the victim had calmly told the officer he had a firearm in the car by way of alerting him to avoid fatal mistake.

The vast majority of cops accused of these kind of racist killings are never prosecuted, or else acquitted.

Michael Brown, a teenager, was shot dead in Ferguson, Missouri, in 2014 even though witnesses said he had his hands up when confronted by the police officer. The cop was not even indicted after a grand jury accepted his claim of being threatened.

Tamir Rice, a 12-year-old boy, was shot dead by two cops in Cleveland, Ohio, in 2014 on suspicion of holding a firearm while he played at a children’s park. Turned out the boy was playing with a replica toy gun. No charges were brought against his killers.

This institutionalized impunity for police officers who are allowed to get away with murder inevitably spills over to wider society. The racist suspicion of black men involved in crime is invoked time and again by self-appointed, gun-toting vigilantes.

Earlier this year, in February, Ahmaud Arbery was gunned down in the street while he was out jogging in Brunswick, Georgia. His attackers, a white father and son, suspected he was connected to house burglary in the area. Video footage clearly shows the victim was unarmed and in jogging gear. Nevertheless, he was shot dead by the two men, one of whom is an ex-cop.

Another notorious case is that of Trayvon Martin, a teenager, who was stalked and shot dead in 2012 by a Florida neighborhood vigilante, again on the suspicion of committing robbery.

The shocking truth is that lynching of African-Americans in the U.S. is alive today as it was during the apartheid era of southern states and their Jim Crow segregationist laws which existed within living memory. The Klu Klux Klan may not be burning crosses openly or hauling victims from the back of jeeps along roads until their bodies burst. Equality laws since the 1960s have brought a semblance of evenness in racial rights and legal protection.

But in the real world of U.S. society, blacks are still systematically poorer, more unemployed, infirm, discriminated against and deprived. The coronavirus pandemic wreaking havoc in the U.S. – more than 100,000 dead in four months – is disproportionately hitting African-Americans harder because of their impoverished living conditions.

Shooting and choking blacks by cops or vigilantes with impunity is part and parcel of the systematic racism that pervades the U.S.. That’s because of the American capitalist class system which relegates blacks and other minorities to the lowest rung among the working-class poor.

A sinister manifestation of this was seen from the incident last week in New York’s Central Park when a white woman hysterically phoned 911 claiming that her life was being threatened by a black man. The man had simply and politely asked the woman to leash her dog in accordance with the park’s rules. Video footage taken by the man showed she was in no way infringed during the encounter. Evidently, she falsely accused the man of malicious intent and, moreover, arrogantly felt her white voice would be backed by law enforcement against a black man.

If the cops had responded quickly enough to turn up at the scene, it is likely the man would have been shot dead for resisting arrest or on suspicion of threatening their lives with his bird-watching binoculars. Because the fact is being black in America is a death sentence.

And yet American politicians and media have the audacity to lecture and sanction China, Russia, Cuba, Iran and other countries about human rights.