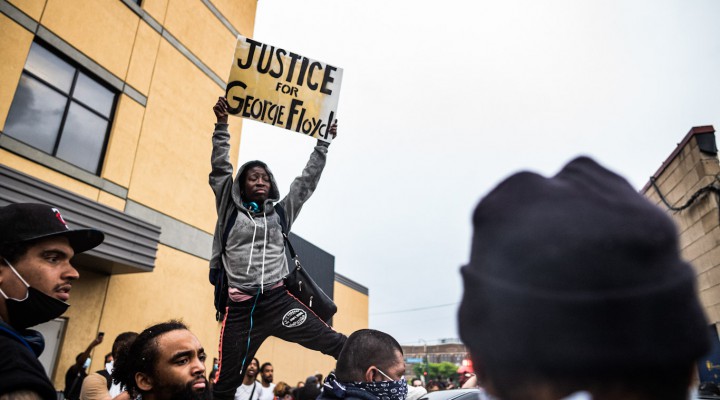 While serving as Minnesota’s chief prosecutor between 1999 and 2007, Klobuchar declined to bring charges against more than two dozen officers who had killed citizens while on duty – including against the cop that killed George Floyd.

MPN– The latest example of America’s racist police brutality problem was caught on camera in Minneapolis Monday, as Officer Derek Chauvin knelt on 46-year-old African-American George Floyd’s neck for over seven minutes until he passed out and died. In its headline on its website, Minneapolis police described the event as “man dies after medical incident during police interaction,” laundering themselves of any responsibility. Chauvin continued his assault even as Floyd desperately pleaded that he could not breathe, while bystanders protested his brutality. “You’re fucking stopping his breathing there, bro,” warned one concerned passer-by. Even after passing out, Chauvin did not release pressure on his neck. Chauvin has killed multiple times before while in uniform, has shot and wounded others and is well-known to local activist groups.

A history of racist policing, thanks to Klobuchar

Minnesota Senator Amy Klobuchar, who Joe Biden recently asked to undergo vetting to be his running mate for November, issued a very tepid statement about the incident, describing the police killing of an unarmed black man over an alleged forged check as merely an “officer involved shooting,” – a copaganda word often used by police as a euphemism for “murder.”

Klobuchar also called for a “complete and thorough outside investigation into what occurred, and those involved in this incident must be held accountable.” However, this is unlikely to occur, in no small part because of Klobuchar herself and the precedent she set while serving as the state’s chief prosecutor between 1999 and 2007. In that time, she declined to bring charges against more than two dozen officers who had killed citizens while on duty – including against Chauvin himself, who shot and killed Wayne Reyes in 2006 and would later go on to shoot more civilians while in uniform. Klobuchar poses with Minneapolis Police while announcing a bill to fund more cops on the street. Photo | Minneapolis PD

At the same time, however, Klobuchar was ramping up the number of arrests as part of her tough-on-crime agenda, something which inordinately affected people of color. In her first year in office alone, the prison sentences for first-degree drug crimes doubled. Activists allege her embracing of the broken window-style policing was a deliberate strategy to win support in the white suburbs of Minneapolis, to the detriment of the city’s non-white communities, bolstering her successful run for senate in 2006. A case in point is Elsayed Salim, who was convicted of failing to declare a secondary income that put him above the threshold for welfare and food stamps. A judge sentenced Salim to 364 days in jail – deliberately attempting to protect him from deportation by keeping his sentencing under a year which downgraded the case from a felony to a gross misdemeanor. An outraged Klobuchar appealed the decision, lobbying for an upgrade and condemning the state’s judges for “letting offenders off the hook too easily.” Mr. Salim was subsequently deported.

While it may not be the first city that comes to mind, data shows that Minneapolis is among the most racist cities in the United States for racial profiling and police stops. The police force’s own data shows that, while black people make up only 18 percent of the population, they were involved in nearly half of all police stops. Conversely, whites make up 60 percent of the population but figured in less than 21 percent of the stops. 62 percent of body searches and 63 percent of people whose cars were searched were also black. Thus, Floyd’s killing is merely a viral example of a wider phenomenon, a spark that ignited a powder keg of resentment that had been building for some time.

Thousands of protesters in Minneapolis fill 38th Street and Chicago Avenue where George Floyd was detained by four police officers and killed. #JusticeForFloyd

Earlier, the mayor said that all four killer cops had been fired. This is how the community responded. Video: KSTP-TV pic.twitter.com/ht9m3SY6YH

Outrage at an unlawful killing

Despite the COVID-19 pandemic, massive protests have erupted across Minneapolis in response to Floyd’s killing, with thousands of people marching through the city. Police attempted to suppress the demonstration last night, firing rubber bullets, tear gas and stun grenades, even though there were many children present.

“This is a disgusting display,” said City Councilman Jeremiah Ellison, “I’m here on the southside, helping people as I can with milk, water, and towels. So far, I have been unable to prevent the police from firing indiscriminately into the crowd. Moments ago, I held a towel to a teenage girl’s head as blood poured from it.”

Thus, it appears that Klobuchar’s milquetoast response was out of keeping with those she represents, and even the public more generally, judging by replies left below it, which included, “This was murder, plain and simple,” “Those cops need to be arrested today,” and “What is there even to investigate?! This cop is a murderer and the other cop is an accessory to murder.” The incident was also the top story on Reddit and Twitter on Tuesday and Wednesday morning.

Other public officials denounced the killing far more forcefully. Melvin Carter, Mayor of St. Paul, said that the video was “one of the most vile and heartbreaking images I’ve ever seen,” adding that “The officer who stood guard is just as responsible as his partner; both must be held fully accountable.” Ilhan Omar, an African-American congresswoman representing the city claimed that watching a black man helplessly begging for his life sickened her. “Black lives matter isn’t just a chant, it’s a call for justice. It’s a call for our humanity to be recognized,” she said, “There needs to be an immediate DOJ investigation into this.”

Feature photo | Protesters gather near the Minnesota Police 3rd Precinct during a gathering, May 26, 2020, in response to the police murder of George Floyd. Richard Tsong-Taatarii | Star Tribune via AP

0 thoughts on “As Chief Prosecutor, Klobuchar Declined to Bring Charges Against Cop that Killed George Floyd”