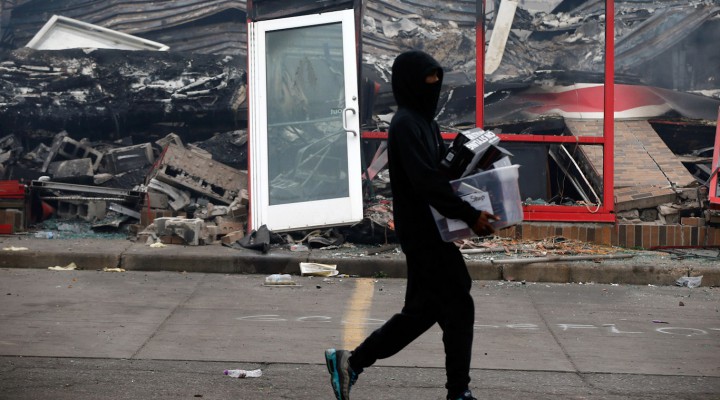 A mountain of studies on wealth inequality have shown its corrosive effect on social cohesion, with the more unequal a society gets, the less likely people are to see themselves as participants in a community and view others as a threat.

MPN– The extrajudicial killing of African-American man George Floyd by Police Officer Derek Chauvin sparked a storm of protests both in Minneapolis and across the country. These have included large peaceful demonstrations, but also arson, destruction of property and looting. Police have abandoned multiple precincts in the face of overwhelming popular rage.

The Reverend Martin Luther King Jr. consistently argued that looting is the language of the unheard and oppressed, a physical manifestation of their marginalization. However, many in the establishment, particularly on the right, have not interpreted the events as such, and appear scandalized by them.

Fox News host Tucker Carlson condemned the uprising as “a form of tyranny” and “oppression.” Referring to the suffocation of George Floyd, Carlson said police brutality was “bad;” “But none of it was nearly as bad as what you just saw. The indiscriminate use of violence by mobs is a threat to every American,” he said, calling for something to be done. President Trump was even more forthright, suggesting that the National Guard be sent in to open fire on “thugs” and “looters.” “When the looting starts, the shooting starts,” he tweeted from both his personal and White House accounts.

Yet a new and updated report from the Institute for Policy Studies (IPS) reveals that the looting in Minneapolis pales into insignificance compared with the enormous wealth American’s billionaire class has managed to accrue during the pandemic. In the ten weeks since the nationwide lockdown first began, the group calculates that billionaires have increased their wealth by $485 billion – equal to 16.5 percent. This half-trillion-dollar rise, for Chuck Collins, Director of the IPS’ Program on Inequality and the Common Good, is something close to looting the whole economy.

“The wealthy are economically distancing from the rest of society. Worse, some are pandemic profiteering, looting government stimulus programs and taking advantage of market monopolies,” he told MintPress News.

The enormous explosion in wealth, even amidst a pandemic that has caused the economy to collapse, businesses to close, and demand to dwindle, is down in no small part to the passing of the Coronavirus Aid, Relief and Economic Security (CARES) Act, one of the greatest upwards transfers in wealth in history. While the bill, passed in late March, includes a check of up to $1,200 for most Americans, the vast majority of the benefits go to the ultra wealthy.

A report from the Joint Committee on Taxation (JCT), a nonpartisan congressional body, found that almost 82 percent of the tax breaks and other financial benefits go to those already earning over $1 million per year. In contrast, less than three percent will go to the great majority who earn under $100,000 annually. The loopholes around capital gains tax will especially benefit the richest few hundred Americans. The JCT also projects that the tax cut will add almost $170 billion to the deficit over the next ten years.

Some of the biggest winners in the last few weeks, according to the IPS, include Amazon CEO Jeff Bezos (up over $34 billion in two months), Facebook co-founder Mark Zuckerberg (up over $25 billion) and Microsoft’s Bill Gates, who increased his already enormous fortune by $8 billion. Meanwhile, Elon Musk, whose California Tesla car plant was closed for months, has seen his net worth increase by almost 50 percent, to over $36 billion. Even in the last week, America’s billionaires’ fortunes have increased by $50 billion.

At the same time, unemployment has surged to over 40 million, and food banks across the country are inundated with customers desperate for anything they can get. Around one third of renters in the United States failed to pay their rent in April and May.

“When the wealth of billionaires surges at the same time that tens of millions lose their lives and livelihoods, it undermines the solidarity required for us to pull together and help one another during a pandemic,” Collins added.

I heard there was looting and I'm furious. Republicans and Democrats stealing from the poor to bail out the rich in a #pandemic. That kind of theft is unacceptable.

While many among the elite may be aghast at the scenes of low level looting in Minneapolis, the enormous siphoning off of public funds to further enrich billionaires has gone largely unnoticed. A mountain of sociological studies on wealth inequality have shown that it has a corrosive effect on social cohesion, with the more unequal a society gets, the less likely people are to see themselves as participants in a community, viewing others as threats. More unequal societies also commonly favor more repressive policing tactics like the ones seen in Minneapolis this week. Although many might not realize it, the enormous looting by billionaires and the petty looting by protestors in Minneapolis might have more in common than first meets the eye.

Feature photo | A man carries items past a burned out Auto Zone store near the Minneapolis Police Third Precinct, May 28, 2020, after a night of rioting and looting as protests continue over the death of George Floyd. Jim Mone | AP