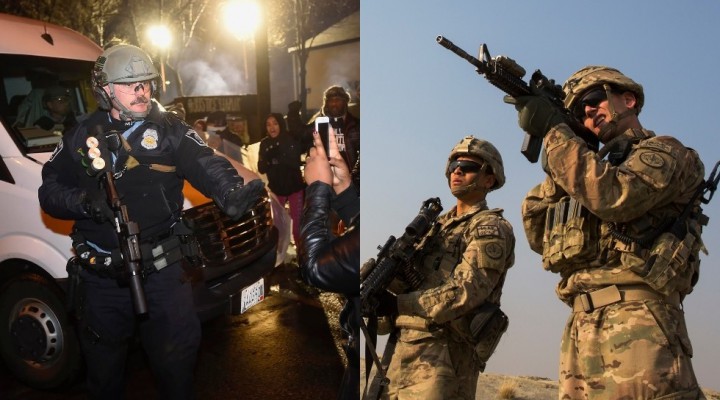 Whether in Afghanistan, or on the streets of American towns and cities, the conflation of US military and police powers has produced nothing but injustice and brutality for those it was intended to serve and protect.

A recent tweet by President Donald Trump about Afghanistan coincided with a developing story out of Minneapolis, Minnesota regarding the brutal murder of an unarmed black man, George Floyd, by uniformed officers of the Minneapolis Police Department.

Under normal circumstances, any attempt to conflate these two seemingly disparate news items would run afoul of any number of logic traps. But upon closer examination, one finds a common thread that binds them together — the near universal deviation from the dictates of justice when it comes to American-style policing. While the American ideal of policing is built around the notion of “to serve and protect,” in practice, whether implemented within the homeland or abroad as part of some nation-building exercise, it has devolved into little more than “brutalize and oppress.”

“We are acting as a police force,” President Trump tweeted earlier, “not the fighting force that we are, in Afghanistan. After 19 years, it is time for them to police their own Country. Bring our soldiers back home but closely watch what is going on and strike with a thunder like never before, if necessary!”

Trump’s observation reflects the reality, backed up by studies carried out by the special inspector general for Afghanistan reconstruction, that after nearly 19 years of unending US-managed conflict in Afghanistan, the American experiment in post-Taliban nation building has failed.

Trump’s tweet touches on the primary reason for this failure — the tools we brought to bear in Afghanistan were tools of war, not nation building. The US military was, at the time of the initiation of operations in Afghanistan in 2001, the finest fighting force in the world. It was trained and organized to close with and destroy the designated enemy through firepower and maneuver.

It was not, however, intended to operate as a force of occupation, compelled to fight an unwinnable conflict against a recalcitrant population with whom it had nothing in common, and as such possessing absolutely zero foundation upon which to conduct a campaign of nation building disguised as reconstruction. Not only did the US fail in its mission to defeat the Taliban, but it failed to complete any of the major reconstruction milestones it set out for itself in Afghanistan. What it did succeed in doing, however, was to destroy the very land it sought to rebuild and brutalize the very population it was supposed to protect, committing untold horrific crimes in the process.

As a result of these crimes, the International Criminal Court in the Hague will investigate information that members of the US military and intelligence agencies committed acts of torture, cruel treatment, outrages upon personal dignity, rape and sexual violence against conflict-related detainees in Afghanistan and other locations, including so-called “black sites” run by the CIA in Poland, Lithuania and Romania.

The Trump administration, in typical form, has rejected the jurisdiction and legitimacy of the ICC, in effect putting American soldiers and operatives above the law when it comes to their actions in Afghanistan. True, isolated incidents have been prosecuted under the Uniform Code of Military Justice, but the “process crimes” affiliated with the execution of the nation building mission will remain unpunished.

Among the many lessons learned from the ongoing debacle in Afghanistan is that the military does not function well as a policing body. For police to be effective, they have to be at one with the community they serve, sharing the same ideals, values and respect for their surroundings and the people who live there. When US military forces are forcibly inserted into a foreign land and culture, there will inevitably be friction that will turn into conflict. The default mode for the US military is extreme violence, and communities are never well served by such an approach.

The American nation-building experience is often infused with notions of so-called ‘Jeffersonian Democracy’, the halcyon notion of the American ideal born of revolution and liberation from tyranny. But the centerpiece of ‘Jeffersonian Democracy’, the US Declaration of Independence, contains words which, upon self-reflection, should send a shiver down the spine of every US citizen.

“But when a long train of abuses and usurpations, pursuing invariably the same Object evinces a design to reduce them under absolute Despotism, it is their right, it is their duty, to throw off such Government.”

This statement holds true for any oppressed people, whether they reside in Afghanistan or Minneapolis, Minnesota. If the American military is ill-suited for policing work, the converse is equally true — American police are ill-suited for militarization. The juxtaposition of a military mindset with the prerequisite notions of justice and due process required to maintain civil society invariably results in inherent incompatibilities resulting in criminal actions on the part of those ostensibly responsible for policing.

The ICC investigation into US military crimes in Afghanistan is but a mirror image of the dismissal of four Minneapolis police officers and their probable subsequent prosecution by either local or federal authorities (or both) for the murder of George Floyd.

Any investigation of Mr. Floyd’s murder, however, cannot cure the illness of militarization that has seeped into the very culture of American policing today. Police officers often view the neighborhoods they patrol as a war zone, and the citizens residing within as the enemy. American cops dress as if they are going to war, often donning military style uniforms, carrying surplus military weapons, and operating surplus military vehicles. This “us versus them” mentality creates the exact same friction as it did during the occupation of Afghanistan, leading to the same escalation of violence by the militarized police delivered to a population that has been for the most part dehumanized.

The American model of policing is a sickness of pandemic proportions, infecting every corner of American society. Supporters of American police often decry the acts of the so-called “few bad apples” without reflecting on the reality that the entire system is dysfunctional in terms of serving and protecting civil society. While there are no doubt many “good” police officers, they reside within a system that promotes self-protection, the turning of a blind eye to infractions carried out by their fellow officers, and the acceptance of the kinds of racist and misogynist beliefs that the society they claim to protect rejects.

George Floyd was killed by a single Minneapolis police officer who knelt on his neck until he blacked out, never to recover. Three other Minneapolis police officers watched this murder take place without intervening. And had the crime not been captured on film by a civilian bystander, the likelihood of the Minneapolis Police Department sweeping this matter under the rug, assigning full blame to Mr. Floyd while exonerating the officers involved, is high.

The Minneapolis Police Department is not unique in this regard. Indeed, it is the veritable model of how policing is conducted across America every day. Until which time every police department in the US recognizes the illness that has infected it, there can be no cure. And the sad truth is that, just as the US government will never allow the ICC to investigate the crimes of American military members in Afghanistan, the American police establishment will never allow a full and complete investigation into the foundational practices and beliefs that guide American policing today.

Americans today live in a de facto police state that subjects its citizenry to brutality and depravation of civil liberties on a daily basis — even more so if one is black or some other non-white minority.

Unlike Afghanistan, the United States cannot withdraw from its own territory. What can happen, however, is that like any occupied people, the citizenry of America can seek to liberate themselves from the despotism of this American police state, throwing off this mantle of oppression by redefining the relationship between the police and the policed. It may take a revolution at the ballot box to elect a government capable of reining in an out of control police state. That, however, would be a fight worth fighting.